8 Gaming Executives Who Make Over $4,000 an Hour and Can’t Even Do a Sexy Bayonetta Voice 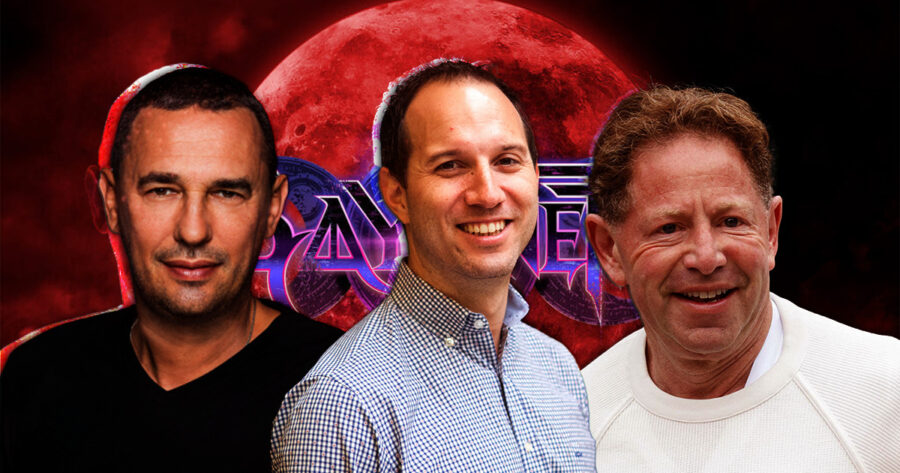 As if Nintendo didn’t already have enough voice acting scandals on their hands this year, they — along with developer Platinum Games — have been accused by Bayonetta voice actor Hellena Taylor of offering just $4,000 for her to reprise the role in the upcoming Bayonetta 3. (That’s about the cost of 66.6 copies of the game. We’re not saying that Platinum is both anti-worker and pro-Satan; we just like doing math.)

In a Twitter video, Taylor argued that the offer was as inequitable as it was insulting, estimating that the Bayonetta franchise has earned “approximately $450 million,” not counting merchandise. And if we know teenage boys — which we do, since roughly 99% of Hard Drive writers are teenage boys emeritus — we imagine they’ve sold quite a bit of merchandise.

Some anonymous sources have disputed Taylor’s account, claiming she was offered around $4,000 per session for several sessions — totaling roughly $15,000-$20,000. But whatever Taylor was offered, it represents a tiny sliver of the franchise’s profit margin, and reflects a broader trend of video game voice actors being notoriously underpaid within an extraordinarily lucrative industry.

Regardless of whether Taylor was offered $4,000 or $20,000 — and regardless of whether she’s a good or bad person — these artists are treated as replaceable, and even expendable, which is how you end up with fighting games where a Nigel Thornberry meat puppet goes silently apeshit on a soulless SpongeBob.

But unfortunately, these are the kinds of sacrifices that have to be made in order to support the true titans of the gaming industry: corporate executives. Here are just a few gaming CEOs who, according to Kotaku, made over $4,000 per hour in 2020 — even though not a single one of them could do a sexy Bayonetta voice if you gave them a hundred years.

(Note: The research team at Minus World generated these figures through a proprietary, sophisticated process: taking each CEO’s 2020 earnings, dividing that number by 52 weeks, and then dividing it again by 40 hours to determine their hourly rate. We acknowledge that these estimates are inherently flawed because there’s no way these guys actually do that much work.)

The founder of NCSoft — the South Korean developer responsible for MMORPGs like Lineage and Guild Wars — makes a Bayonetta-voice-actor-sized salary every 32 minutes. But you have to understand that he is getting paid for his unique leadership capabilities. Who else could run a company that so efficiently (and so allegedly) covers up sexual harassment complaints from female employees? Plus, the more staffers who quit in disgust, the more payroll becomes available for voice actors!

Obviously, someone like Hellena Taylor is easily replaceable — but it takes a once-in-a-generation talent like Take-Two CEO Strauss Zelnick to oversee 2K and Rockstar Games, which consistently delivers iconic content thanks to what multiple employees have called a “culture of fear.” Why pay an all-star cast to play a rich ensemble of characters in a horror game like The Quarry when you can cultivate a spoooooooky work environment?

Have you ever wondered who is behind the engine that powers some of your favorite iOS and Android games? Well, John Riccitiello gets paid over 10 grand an hour to wonder the same thing. Would he perish if he were locked in a room with his own game engine and told he can’t leave until he generates a single polygon? It’s impossible to know — but what we do know is that his leadership is indispensable. You need someone at the top to keep morale high when your company’s stock drops nearly 85 percent in one year.

Sure, Frank Gibeau makes more money in 20 minutes than Hellena Taylor was allegedly offered to record an entire game. But can you really put a price on a company that has transformed millions of grandmas into gamers, thanks to smash hit games like Farmville and Words with Friends? Turns out, you can — it sold just five months ago to the aforementioned Take-Two Interactive for 12.7 billion dollars. With that kind of money, you could record Bayonetta dialogue for 3,175,000 more sequels!

EA has gotten a lot of flack from gaming publications like Minus World for their obsession with microtransactions. But Andrew Wilson is bucking that criticism by constantly paying himself extremely macrotransactions. That’s the kind of investment it takes for EA to remain at the top…of lists like “Worst Companies in America” and “America’s Most Hated Companies.”

We keep spending most our lives livin’ in an Andrew Paradise — which is to say, a world where a guy named Andrew can make $4,000 every five minutes for running a gaming competition platform. It’s not so much of a paradise, though, for Jeremy Paradise — Andrew’s brother who sued Andrew in 2021 for allegedly scheming to take over Jeremy’s 5% stake in the company. It might seem like an insanely unrelatable situation, but replace “Jeremy” with “your little brother” and “5% of the company” with “the good controller” and suddenly Andrew’s alleged actions make total sense.

Look, we tried, but we can’t come up with any aspect of Activision Blizzard to make fun of. Certainly not Bobby Kotick specifically.

And finally, the single highest-paid gaming CEO in 2020 was Robert Antokol of Playtika — a mobile casino game publisher — who makes more in a week than the vast majority of voice actors will make in a lifetime. The time he spends playing one of his games on the toilet is more than a lot of people make a year. But as egregiously high as his pay may be, you have to respect the honesty of his work. Every gaming CEO profits from artists, employees, and users who are willing to put in more value than they get back. But at least when you gamble, everyone understands from the get-go that the house always wins.