“0 Days Since Horribly Damaging Report About Us,” Reads Sign at Activision Blizzard 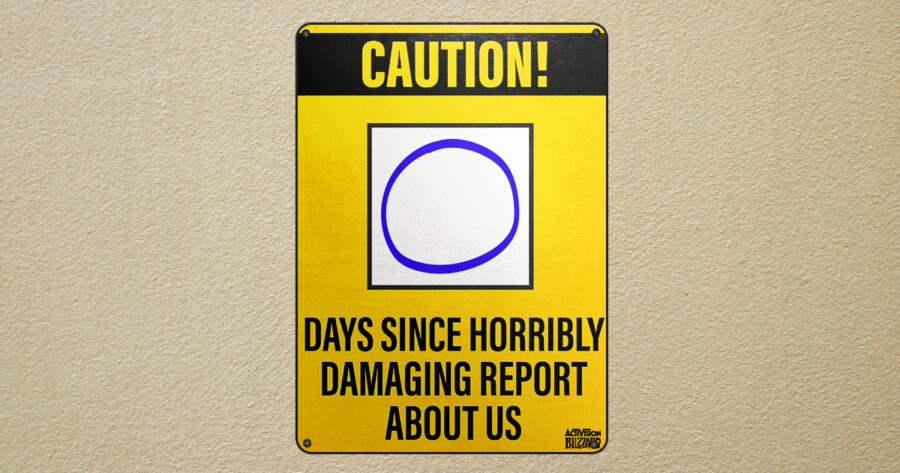 SANTA MONICA, Calif. — A recently installed sign in the Activision Blizzard cafeteria will enable employees to keep track of how many days the company has gone without an absolutely horrific report about their company’s culture as well as CEO Bobby Kotick, several employees have confirmed.

“Good, let’s hold them accountable in some way at least,” said Sharon Goldberg, a level designer for Activision Blizzard. “The higher ups are clearly hoping this blows over, but we need to hold their feet to the fire. They haven’t responded to our walkouts and the board of directors is standing by Kotick. You simply cannot have multiple, repeated, just constant fucking reports coming out about what the bag of shit that runs this company has done, which includes looking the other way on a lot of little piles of shit being terrible as well. Wow, one day. Incredible work, guys.”

The installation of the adjustable sign comes after a break in what has been a steady stream of reports detailing Activision’s history of discrimination and harassment, much of which reportedly coming from Kotick himself.

“I hope they enjoy this while they can, because it’s certainly just a matter of time with these assholes,” said Ren Jennings, a journalist that’s covered Activision Blizzard extensively. “They just formed what they’re calling a ‘Workplace Responsibility Committee’ instead of just sacking Bobby Kotick after over a thousand employees signed a petition to remove him, so yeah, we’re not done hearing about how terrible they are. Probably just slowed up because of the holiday weekend, honestly. Awfully optimistic of whoever made that sign to give it room to get up to double digits, I must say.”

Despite the negative connotations that a sign of this nature brings along with it, beleaguered CEO Bobby Kotick seemed to think things were going fine.

“Wow look at that, one day, that’s fantastic,” said Kotick, surveying the recently installed sign. “I got here early this morning just to check Twitter and then flip the one over so everyone would see it when they got into work this morning. I feel really good this morning. In fact, I’m thinking this could be a whole new chapter for Activision. Say, you haven’t talked to anyone else about me, have you? HAVE YOU?!?”

As of press time, the people that installed the sign have sued Bobby Kotick for sexual harassment.