Sonic Frontiers Wyvern Guide: How To Beat The Second Titan

A dragon has four legs, and a wyvern has glowing neon antenna. 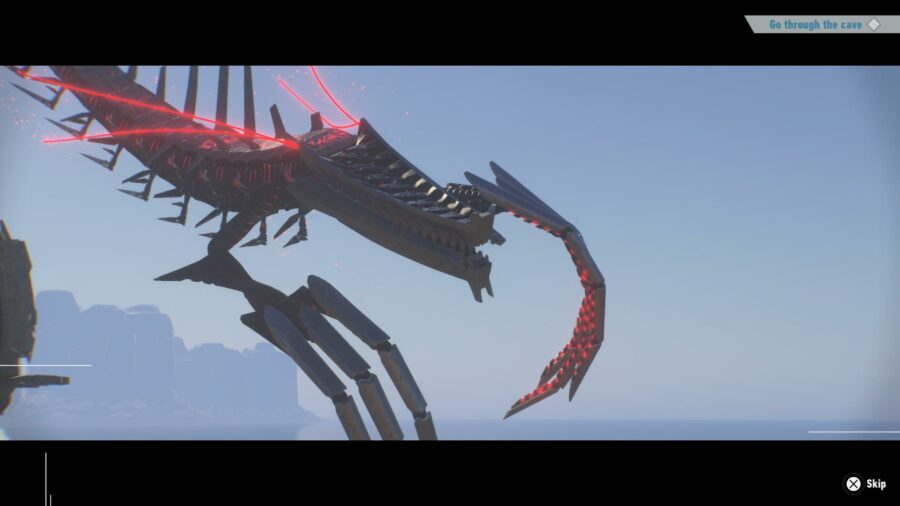 The second island in Sonic Frontiers comes with a second Titan as its climax. The first was just a large lad, but this one, named Wyvern, is more of a fantasy creature. It brings to mind the winged serpents of Mesoamerican myth. Or, you could call it Large Lad 2: Flying Version. The fight is a little more involved than the first Titan, with more phases to worry about and a few instant death points. Take a look at our Sonic Frontiers Wyvern Guide to stay airborne. 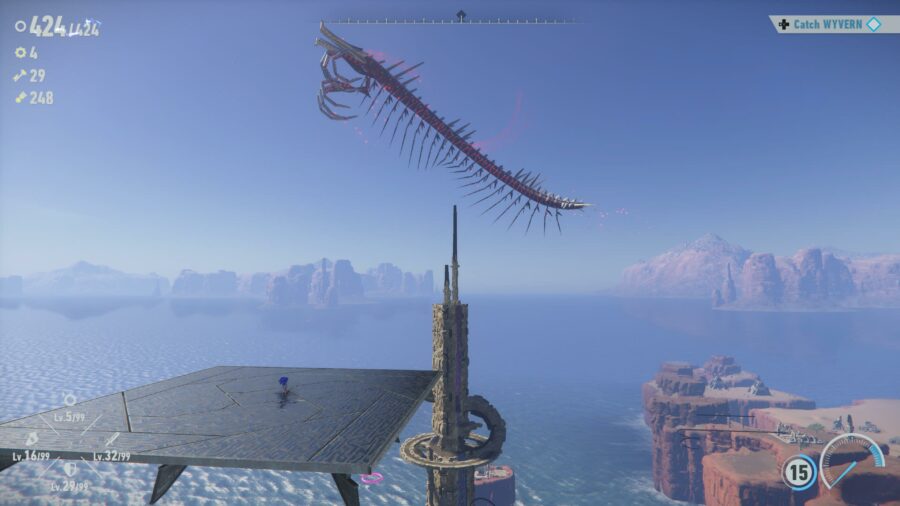 The fight starts on the ground. The first step is to climb the tower Wyvern is circling. On the way there, you’ll see a bunch of springs and climbing rails that lead upward. These can be ignored if they’re not part of the tower. They lead to the platform in the above image, which has a bunch of rings, but no route to the boss. If you’re having trouble with the fight, this is a good way to collect rings ahead of time, but it shouldn’t be necessary.

Instead, go straight toward the tower. You can’t miss it. Climb it the same way you would any other free-roam structure. Follow bounce pads and wall-run sections to the top, tapping the boost button to speed through the rails. There’s little risk here. Even though a few enemies spawn, Sonic can run past them.

At the top of the tower is a small extension a little like a diving board. Stand there and wait. Wyvern will eventually fly past. When you see the Homing Attack target appear on Wyvern’s head, press the attack to trigger the next phase. 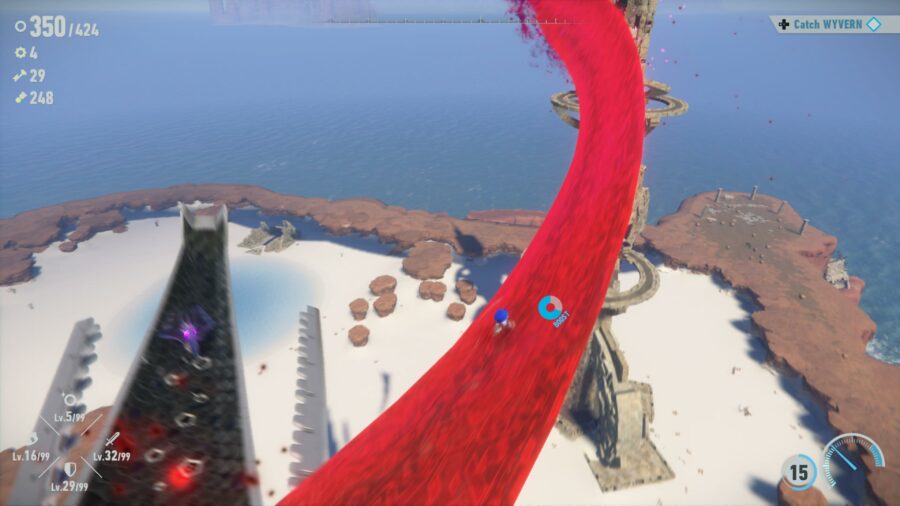 This is the Fruit Roll-Up phase. After a cutscene, Sonic will begin running on this holographic pathway. It’s hard to fall off, but the path has two obstacles. First, spinning neon bars that need to be Homing Attacked to progress. Second, electric balls that travel down the path in Sonic’s direction.

Speed isn’t an issue here. More important is to avoid being hit by the balls, since that will make Sonic drop the rings he’ll need for the final phase. Tap left and right on the control stick to make Sonic quickly dodge out of the way of the attacks. The shoulder button dodges work the same way if you prefer precision.

Make sure you Homing Attack when you see the neon bars, and soon enough the road will drop Sonic on Wyvern’s back. Nothing fancy here; just walk up and grab the Emerald with the button prompt. 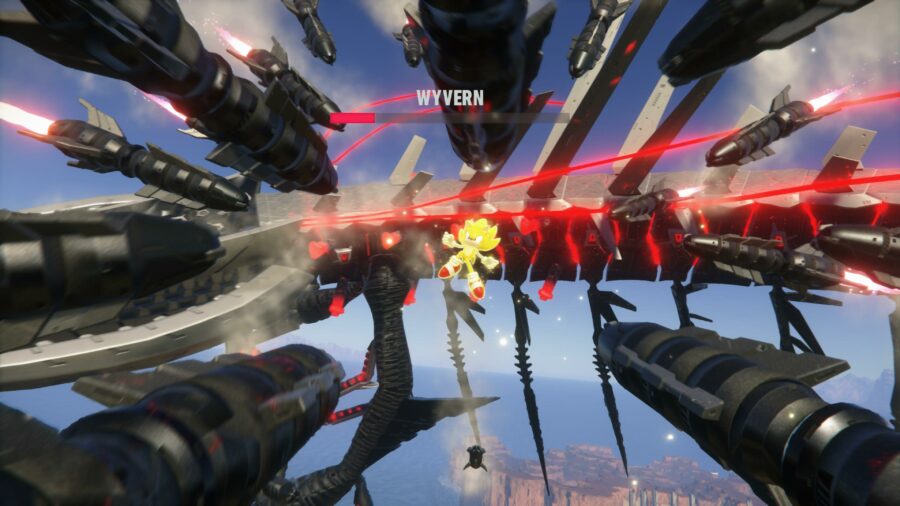 When Sonic gets the emerald, it’s Super time. He doesn’t take damage, but if he can’t beat Wyvern in time, he runs out of rings and is considered dead. The first Titan would take heavy, reliable damage from a counter followed by Grand Slam. In this fight, Grand Slam doesn’t seem to work, but counters are as vital as ever. The boss will always start by firing missiles. Maneuver in front of any of the missiles and hold the shoulder buttons to counter. The missile will bounce off Sonic and hit the boss instead.

Once a missile has hit Wyvern, it switches to physical attacks. Deal with these by countering as always. Its movements are a little hard to read, but that’s okay. The timing on each counter is extremely generous. Hold the shoulder buttons whenever the boss looks at you funny and you’ll get the counter. When you see the Homing Attack target on Wyvern’s head, the boss is vulnerable. Any of your combos will work here, but faster is better. Homing Shot, performed by Boosting and immediately pressing attack, is a quick way to do lots of damage.

Wyvern takes four rounds of this to go down for good. The first two follow the pattern above, but starting from the third, it will start firing red laser rings all over the place. These do nothing, but they mark a change in Wyvern’s behavior: after countering its melee attack, it will now do a second melee attack instead of becoming vulnerable. Counter the second attack once the first is complete.

After the third round of attacks and the boss is almost dead, it triggers the quick time event in the above screenshot. If you don’t complete it soon enough, Sonic dies despite being invulnerable. What a rip-off! This QTE is a little tricky: it follows the same rules as fishing with Big. To succeed, you have to press the button when the expanding white outline overlaps with the red area around the outside of the screen. You can press at the wrong time for no penalty, but it has to be done correctly before time runs out.

From there, the fight continues as normal. Counter two more melee attacks and do a couple more combos to remove the last of Wyvern’s health. It’ll do a few final attacks in the form of more QTEs. Some are the fishing minigame type like before, but watch out for a couple that require rapid presses instead. With that, you can move on to Chaos Island and the rest of Sonic Frontiers.