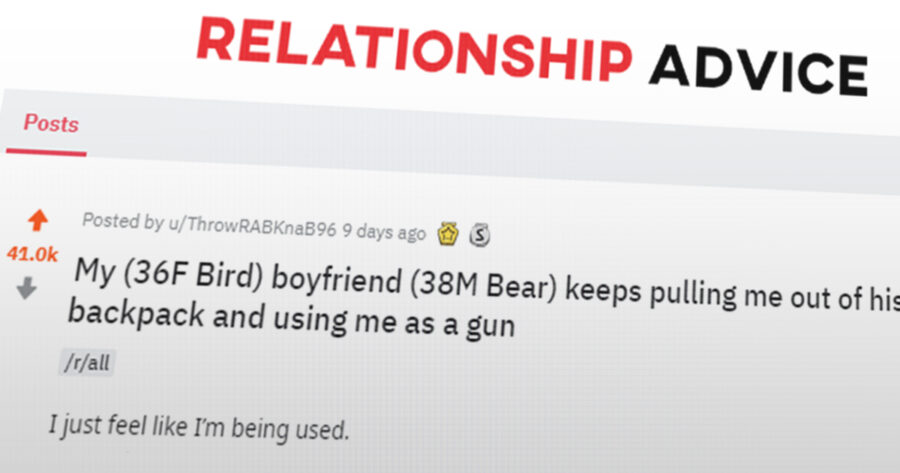 SPIRAL MOUNTAIN — A new post on Reddit’s r/relationship_advice by an anonymous user was quickly identified by fans to be about the famous bear and bird duo Banjo and Kazooie.

“I just feel like I’m being used,” begins the now-deleted Reddit post entitled My (36F Bird) boyfriend (38M Bear) keeps pulling me out of his backpack and using me as a gun. “I have no agency in this relationship. For the most part, I don’t get to decide where we go — I rarely get to be the one walking. I get shit talked constantly by strangers, and my boyfriend never defends me. He uses me as a tool, he smacks me against other people. He ground pounds me. But I just don’t know what to do, he’s the only person I really know and I still love him.”

Commentators quickly picked up on the fact that the post seemed to have been written by Kazooie about her boyfriend Banjo.

“I think I know who this is, but sis, dump that only-pants-wearing motherfucker,” said one reply to the Reddit thread. “Throw the whole bear away.”

“Obviously this is anonymous but if it is who I think it is, maybe you should just appreciate your boyfriend more?” said another reply. “He’s the one gathering most of the jigsaw puzzles and musical notes. I think everybody sucks here.”

After some time, however, many commentators began to discuss whether or not the post was a troll pretending to be Kazooie.

“This is way too obviously supposed to be Banjo and Kazooie. Bad troll is bad,” replied one comment. “Kazooie has been on record saying that she loves Banjo and has nothing bad to say about him. Just watch any video of them, they’re clearly mad happy. This is so fake lol.”

As of press time, a spokesperson from Rare clarified that neither Banjo or Kazooie could have written the Reddit post because both are illiterate.