Mario + Rabbids Winter Palace: How To Beat It 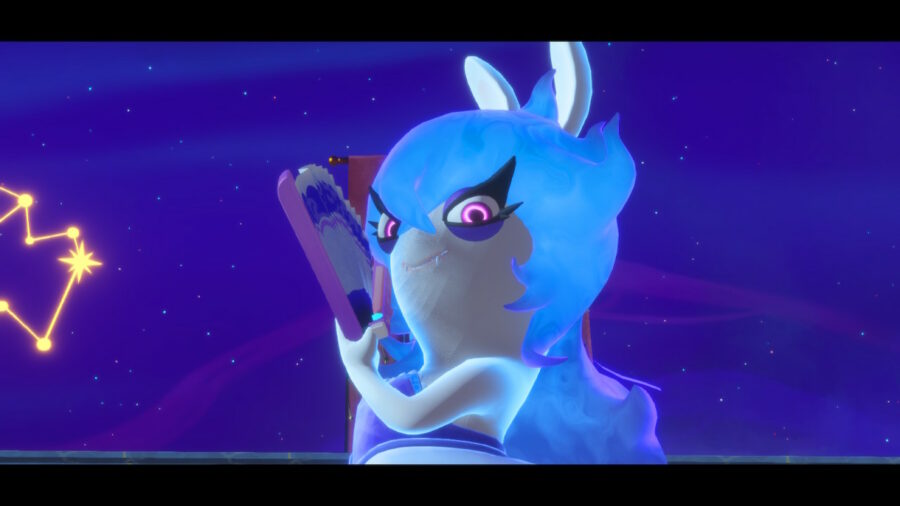 Mario + Rabbids: Sparks of Hope continues the famous plumber’s XCOM-style lagomorphic adventures by adding a touch of Super Mario Galaxy. The game is divided into planets, each one featuring different settings and enemy types. The second planet, Pristine Peaks, is an arctic region capped off by a puzzle-filled Winter Palace. It’s a straightforward dungeon, but it includes a couple sneaky tricks that can ensnare the unprepared. Don’t get cold feet – here’s how to beat the Mario + Rabbids Winter Palace. 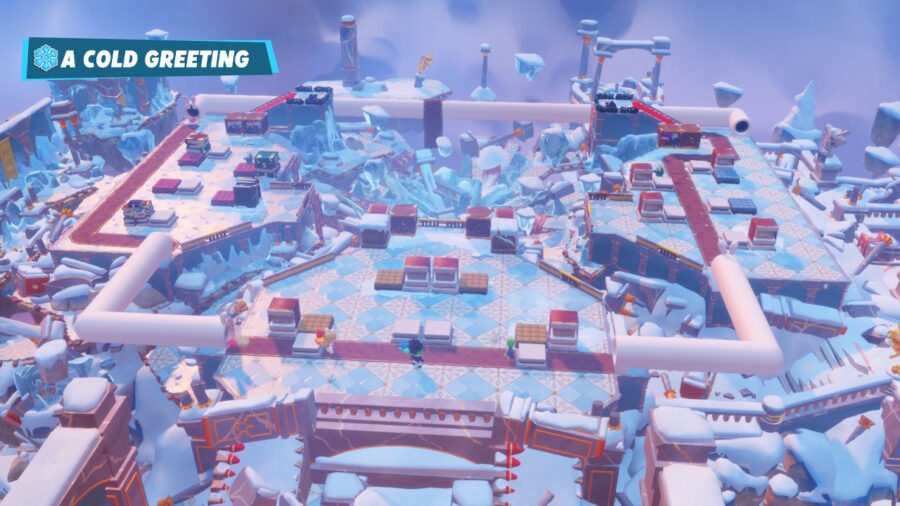 The Palace unlocks after clearing the Darkmess Tentacle from the mountain peak and obtaining the first crystal. It’s far north on the map, and hard to miss (it’s a mansion). There’s no puzzle keeping the front door locked, at least; just walk right in after the cutscene.

There are two unskippable fights in the Winter Palace. The first is directly in front of you: “A Cold Greeting.” You win by beating any 12 enemies. Mind the two hiding behind the frontmost pillars. Almost all of the enemies here are water-aligned. A character with an electric attack that hits multiple targets is effective here. Rabbid Luigi’s disc or Edge’s charged dash are good options. An electric-charged Rabbid Mario can punch those two hiding enemies through the wall, potentially defeating them in a single turn.

Sharp-eyed players may notice that there aren’t 12 enemies on the map to kill. Sure enough, more will spawn in through untargetable portals. Better to clear as many as possible before the adds spawn, though, so don’t delay. Mind the pipes, as well: the enemy is able to appear through one, dash attack your hero, then escape back through it in a single turn.

Check the room after the fight for a few extra secrets. There’s a free item through the door on the right, and a secret area behind a cracked wall on the upper-left balcony containing a tough encounter for later. 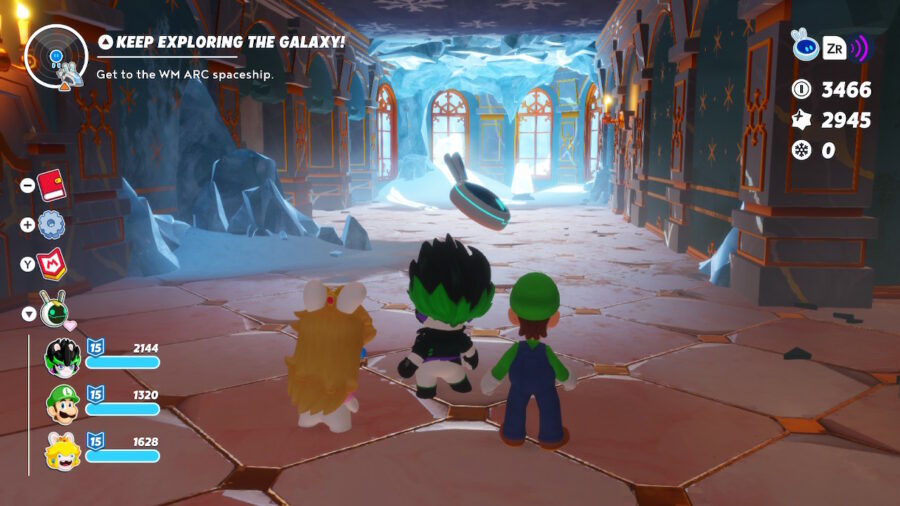 The door to the boss is sealed behind two statues that require “activation”. Each one is activated by pressing a switch, found through doors on each side of the statue room. The left-hand door leads to a maze of doors reminiscent of a Mario ghost house. Entering a “wrong” door returns the player to the start of the maze.

The trick here is to watch for cracked walls. These can be destroyed with the sonic ability on the ZR button. Any door behind a cracked wall will always be correct. It’s also worth breaking everything you can to look for bonus items. 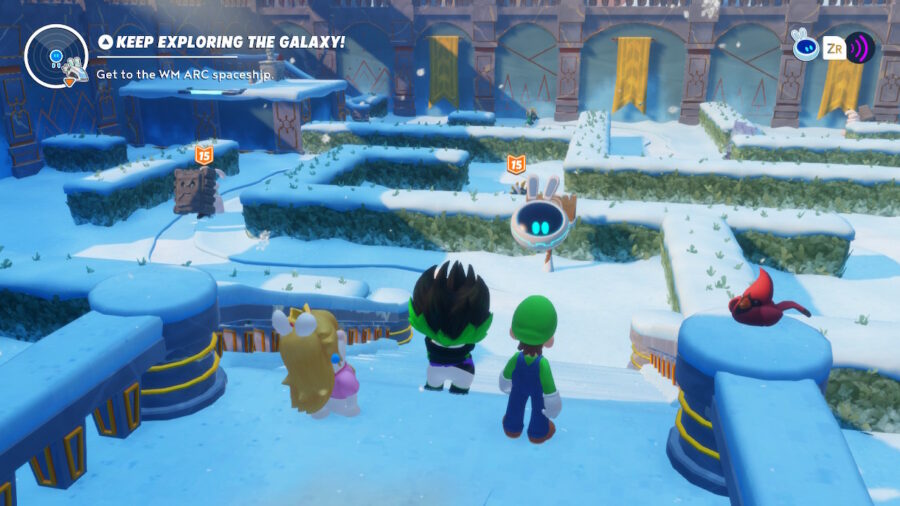 It’s not much of a maze, but the enemies infesting it make it a real hassle. It’s actually possible to evade all the enemies by staying out of their line of sight. The second one is dodgable by running past while it’s closest to the player – remember to use X to run faster. The last two are trickier, since they require the player to move a key from one enemy partol zone to another. Thanks to the hedges, you can accomplish even this without fighting if you’re quick.

These enemies are difficult to outrun, but their pursuit range here is pretty short, so a quick escape is another possible solution. You can also just kill them. None of them are especially threatening, but battling them takes a lot longer than sneaking past, with minimal reward. Don’t try the “flee from battle” option to cheat your way through: that’ll put you back at the room entrance.

Once both statues are activated, there’s one last puzzle before the boss. The player has to line up three wheels to make complete constellations. This one’s simple enough: start at the outermost circle and work inward. 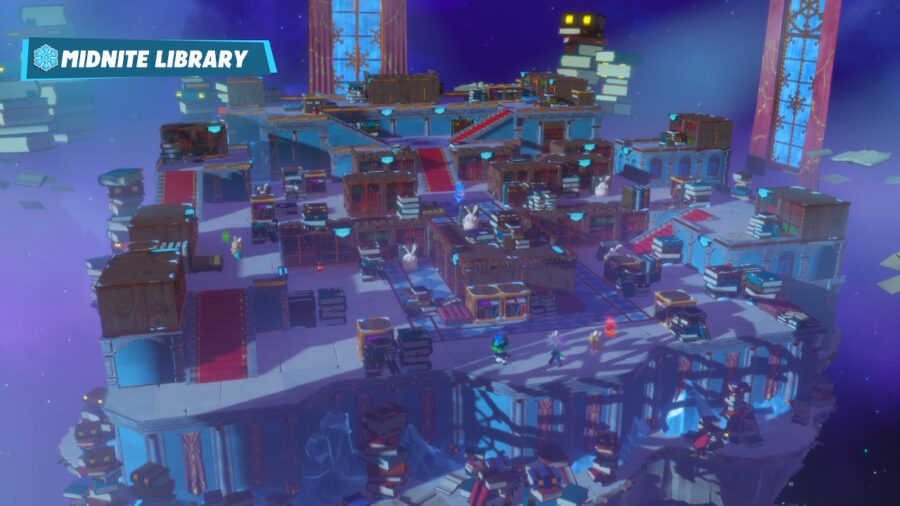 Strap in. This is the first real boss in the game. Midnite’s not much on her own, but every time you take her health to zero, she starts a new battle from the beginning. You have to win three different fights back-to-back to beat the Winter Palace. For this reason, Rabbid Peach is very useful for the boss. Midnite heals fully between maps, but you don’t! Being able to restore your own health can keep you from running out of steam midfight. If one of your team dies, they’ll be back at the start of the next stage of the fight, but with only 1HP left, making healing even more important.

The player gets a little bonus: Rabbid Rosalina joins as a 4th teammate for the boss. Remember to set her up with Sparks and talents before the fight: she gets the same number of prisms for her skill tree as your other characters, but they don’t do anything unless you spend them. Her signature skill, Ennui, has a lengthy cooldown, but everyone’s cooldowns reset when Midnite changes maps. Throw it out for some extra safety: it even works on Midnite if she’s in range, forcing her to lose a turn.

At the start of each map, Midnite will teleport into range of one of your characters and attack. She hits extremely hard, so have a high HP character up front. Since each map ends instantly when Midnite hits zero HP, a solid strategy is to anticipate her opening teleport attack, then buff up and beat her down with your entire team at once. If all the bob-ombs are dealt with and the fire enemies are out of range, there’s no risk of area damage to a grouped-up team.

A dash-focused Edge is extremely effective at heavy single-target damage, and you should be using her for this fight anyway for lore reasons. With multiple dashes, Edge can strike one target multiple times in a single turn and finish with an attack or prep for Stormblade. Using a splash-amplified dash, you can punt Midnite like a football into your waiting teammates.

If you’re focusing Midnite down, the only real risk is interference from other enemies. Thanks to all the cover, you can ignore most of them unless they’re melee attackers nearby, or that one Lone Wolf on the tower in Map 3. Spend your first turn eliminating close threats, and the second turn focusing the boss once she teleports in. Don’t worry too much if you lose: you can restart from the beginning of each of the three stages of the battle. If you get a poor start to a later map, you can reset to the checkpoint using the pause menu.

If you’re still stuck, there are a few boosts you can use to secure victory. The shop at the Winter Palace entrance will sell you buffs, and cash is easy to come by in Mario + Rabbids. If all else fails, there are difficulty settings, including one that makes your whole team invulnerable. Ubisoft has you covered.