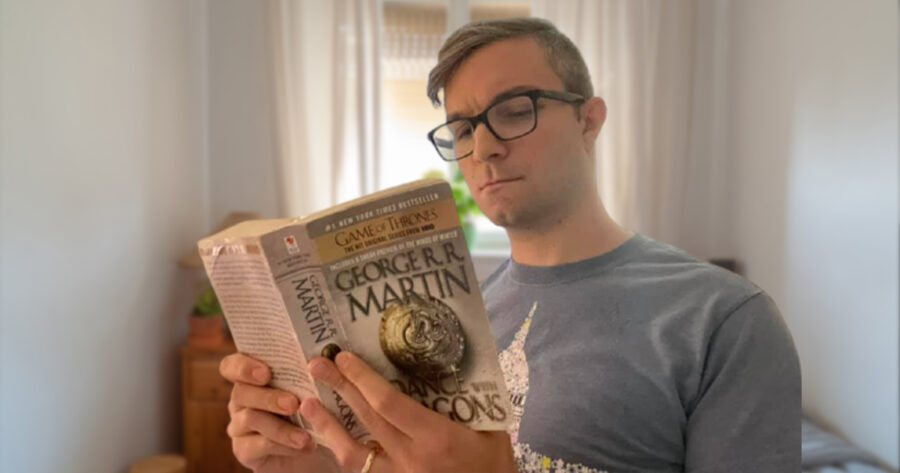 ROCHESTER, N.Y. — Local fantasy fan Geoffrey Parsons is reportedly worried that his A Song of Ice and Fire reread, in which he reads one page from the series each day, may finish too quickly before the release of The Winds of the Winter.

“I’m so excited for Winds to come out, and I really wanted to reread the series, but I don’t want to finish it and then have to keep waiting for book six to come out. That’s why I figured I could just read one page per day, but… that’s only 5,035 days. I love George R.R. Martin, but I’d be shocked if the next book comes out in the next 14 years,” Parsons explained. “I thought about going letter by letter, but it’s hard enough making out sentences with just a word each day. Oh well, I guess I’m gonna just have to watch a YouTube catch-up video when Winds is released like everybody else.”

Fellow fans of the series agreed with Parsons that he may be too hopeful with his reread.

“I think it’s always going to be dangerous if you’re reading the series faster than George is writing it,” said r/asoiaf user u/JeffGarlinTyrell. “I think rereading the series one word at a time is really smart, though, and it actually inspired me to do my own reread. For mine, though, I’m going to try to come up with one new fan theory per word in A Song of Ice and Fire. Hopefully that holds me over until book six. Because lord knows I’m not gonna fucking read a Wild Cards book.”

“I think that’s a good strategy for a casual fan,” said u/NimbleDickGregg. “I’ve got my own strategy, of course. In an attempt to make sure to keep George alive until he finishes writing all the books, I send a daily package of food and medicine to his home so that he stays healthy. It’s difficult — especially figuring his address every time he moves and blocks me on all social media — but I’ve gotten really good at reading between the lines of his writing and the mail that I steal from a local dumpster near his parents’ home. The guy is just a dense and terrific writer.”

Despite fans clamoring for book six, series author George R.R. Martin has insisted that he has not made any progress on writing it since his last update.

“Ahoy, fans! I’ve been busy busy busy once again, sleeping under a mountain of work trying to finish up all seventy-five TV, book, and video game series I’ve agreed to write for,” Martin wrote in a recent post to his website NotABlog. “Will I finish the big Windy One, whose name I dare not write on this blog? Perhaps. Just last week, I thought it may be finished by the end of that day. Now, however, I fear that it will not be complete for another hundred years. Time moves differently for me. Some days are years, while others are merely seconds. Nonetheless, I have not worked on that book for a very long time. Please do not contact me.”

At press time, Parsons clarified that he feels the books should take “as long as absolutely necessary” to avoid them having a similar ending to HBO’s Game of Thrones.