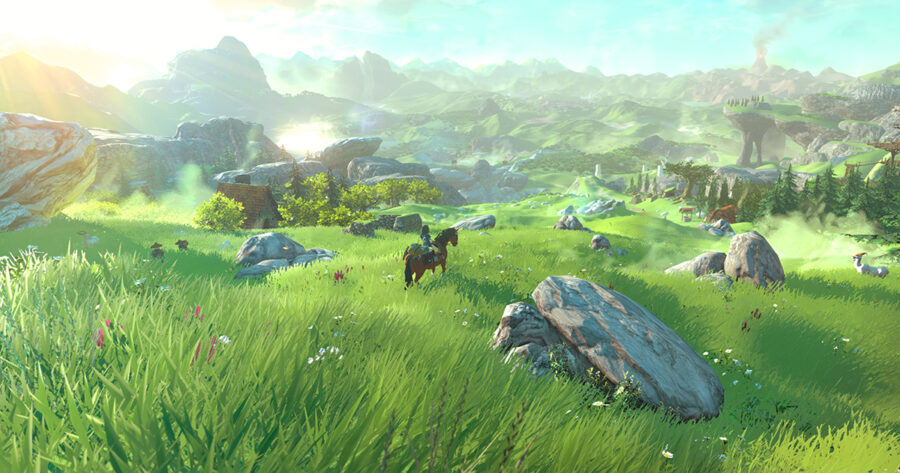 If you’re familiar with my work or video game content in general, you know that I love to go to ridiculous lengths to find unique themes in art, as well as unique titles that stand out across various social media algorithms. Well today, I’ve gone to my most ridiculous length yet and I’ve discovered something that I don’t think anyone in video games has noticed: I touched every blade of grass in Breath of the Wild and learned that I need help.

You might be wondering why I’m publishing this work today, nearly five years after the release of Breath of the Wild. Well the amount of work that goes into my content means that they take a lot of time to come out; there are literally billions of blades of grass in the game and touching each one as Link took a very long time. Similarly, there are thousands of therapists in New York City and only a handful of them are any good. So the project was destined to take at least a few years to complete.

In fact, it was around March 2017 when I began the project, inspired by a comment left by an anonymous user on my video Romancing Every Character in ‘Stardew Valley’ Until I Feel Real Life Love that simply said “touch grass.”

So what did I learn in my journey to touch all the grass in Hyrule from Eventide Island to the Hebra Mountains? I learned a lot.

I learned that you can easily kill elemental wizzrobes by hitting them with their elemental weakness. I learned that fire keese can set grass on fire if they fly too low to the ground, forcing you to kill them early or restart your Switch.

I learned that my thumbs need daily ice baths after swinging around on a control stick too much left them covered in painful large calluses.

I learned that throwing a joy-con in frustration against a wall does not fix drift and, in fact, makes it worse.

I learned where some of the Korok seeds are.

I learned that a DLC announcement introducing new areas to a game you love can make you cry in a bad way.

But most importantly, I learned that I need to make increasingly complicated video game content in order to feel anything anymore. I’ve let my life become so increasingly controlled by social media algorithms that I can no longer feel alive without performing some insane and arbitrary video game related stunt. I’m like the kid in middle school who notices that no one is paying attention to him anymore, so he stands up on his desk and loudly announces that he is going to try to drink a bottle of glue. (Note: not sure if this is a relatable story to people, but my school did have this kid because I was the kid and it’s something I did for attention before I discovered video game content).

So what’s next for me? Well, the good news is that I’m in therapy and I’ve been learning a lot about how to reintegrate myself into the relationships I lost chronicling my adventures through Hyrule (which, by the way, weren’t very different from a normal game because I wasn’t actually doing anything interesting with the mechanics, I was just going through the world very slowly. Kind of a bummer because I wasted all that time, but hey that’s content am I right lol).

I’m excited for the next chapter of my life, which will be far far away from making over-the-top video game content in a desperate attempt to stand out from the millions of other pieces of video game content that gets produced every day. I think it’s going to be a much healthier creative journey for me, and I hope you join me for my next project, which is to come out in 2023: I Did 18 Hours of Therapy a Day for One Full Year to See If I Could Speedrun Mental Health.