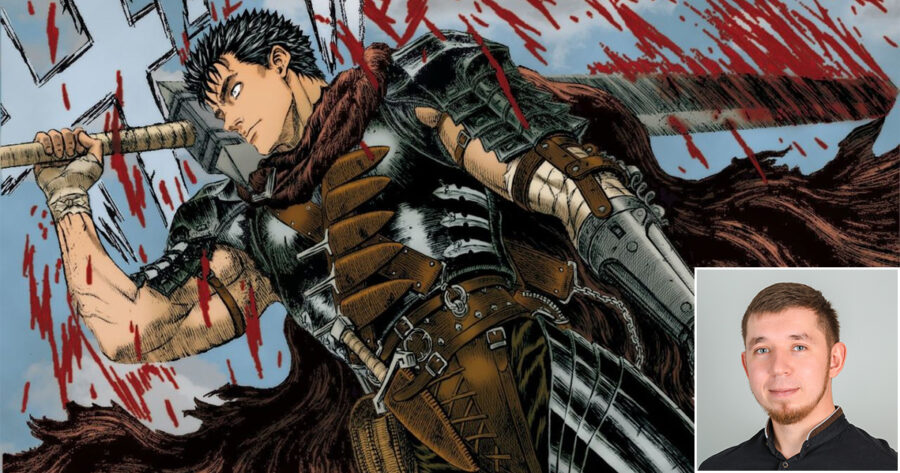 LITTLE ROCK, Ark. — Tom Nalley, a longtime fan of the Japanese manga series Berserk recently remarked on twitter that the series protagonist, Guts, was exactly like him, despite little to no physical resemblance or remotely similar personality qualities.

“He’s just like me, FR” said Nalley, scrolling through Twitter on his phone at 4 a.m while laying in bed. “Look at him swinging that giant sword around, killing the apostles that haunt him every night. We’re so similar, and that cunning bastard Griffith is exactly like my night shift manager at KFC.”

Kouji Mori, the manga author currently supervising Berserk, recently saw the post and was somehow stunned at the similarities.

“Incredible,” remarked Mori. “When Kentaro Miura would talk with me late into the night about his plans for Berserk, we both agreed that no human being could ever walk a mile in Guts’ shoes, to know the tragedies he has felt and to do what he has had to do. But this man… this Twitter user… he is the true black swordsman.”

Marty Adelstein, the CEO of Tomorrow Studios who is responsible for the Netflix live-action adaptations of Cowboy Bebop and One Piece, also took notice of the post.

“Call up Netflix, we’ve found our Guts,” said Adelstein, believing the unwitting man to be exactly what they were looking for. “Production starts next month. We can finally move forward with this project. We’re going to have the wackiest, smarmiest script for Berserk ever, and this man will deliver the lines that everyone on the internet will love and appreciate. He’s just like Guts for real, and that’s our whole business.”

At press time, Nalley was seen reading a volume of Berserk on the city bus while struggling to open a bag of Goldfish crackers.