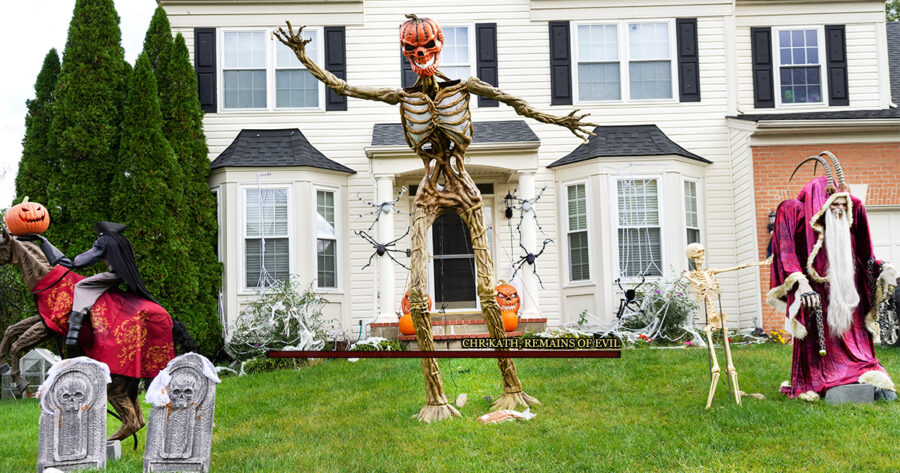 ELMTOWN, Mich. — Police have warned residents to avoid Graham Baker’s house on Poplar Street where a health bar was spotted under a giant lawn skeleton.

“I can put up with the spooky music and the fake bats and stuff, but I draw the line at having to battle any of the decorations to the death in single combat,” explained Stacey Harlow, the neighbor who first spotted the health bar. “So, when I saw a giant red bar and the words ‘CHR’KATH, REMAINS OF EVIL’ appear under that skeleton, I knew something was wrong.”

Harlow contacted the police, who arrived on the scene and immediately assessed the situation.

“At this point we do not know what aggroed the skeleton located here on the front lawn of Mr. Baker’s residence,” said Officer Chuck Viggaroni, first to arrive on-scene after receiving Harlow’s call. “We’re not even sure what the skeleton is capable of, if it has magic, or how big its cone of vision is. As we cannot gauge the threat level at this time, we will wait until the homeowner returns to explain why a high-level and named enemy is being used as Halloween decor.”

Baker later returned home and, after speaking with detectives, made a public statement about the controversial lawn ornament.

“Everyone was trying to upstage me with these big boney bastards, so I decided it was worth paying a bit more for a special one. Don’t ask me where I got it, but let’s just say there was a summoning circle involved,” Baker said, gesturing to the skeleton from a safe distance. “Now, let me see if I have the instructions in the house to get rid of him.”

As of press time, Baker had been unable to remove the skeleton, but the health bar had reportedly turned yellow.