Splatoon 3 Splat Zones: How to Play and Improve

Get into the zone! 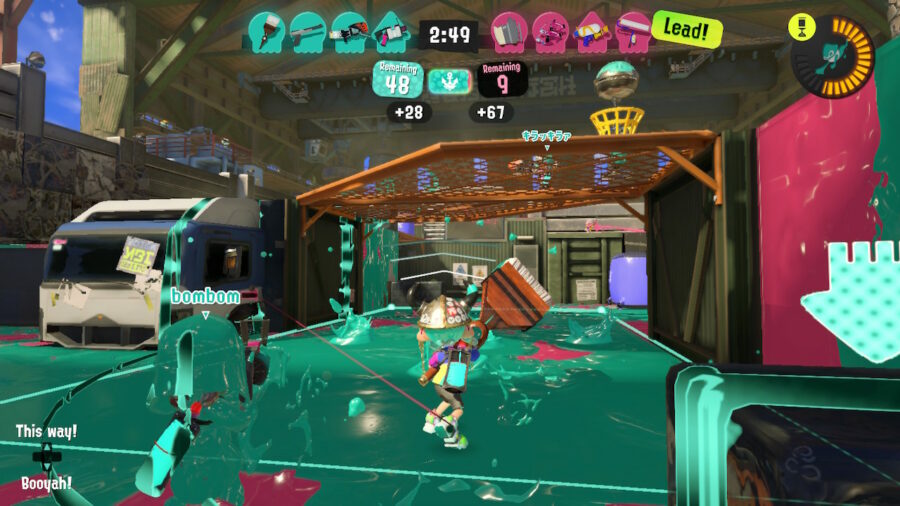 Splat Zones is one of four different ranked modes available in Splatoon 3, accessible on regular rotation within the Anarchy Battles playlist unlocked at level 10 (or if you happened to have Splatoon 2 save data on your console prior to first playing the game, level 2). This mode is a control-based competitive arena where teams must take control of the turf in a specially-marked area of the map until your points count to zero.

That’s a very simplistic overview of the mode, but how does Splat Zones work when you dive into the game, and what does it take to rise up the ranks in this most strategic of modes? That’s what this guide here is all about, as we plan to offer you a helpful rundown of everything you need to know to become a Splatoon 3 Splat Zones master.

What are the Rules of Splat Zones in Splatoon 3? 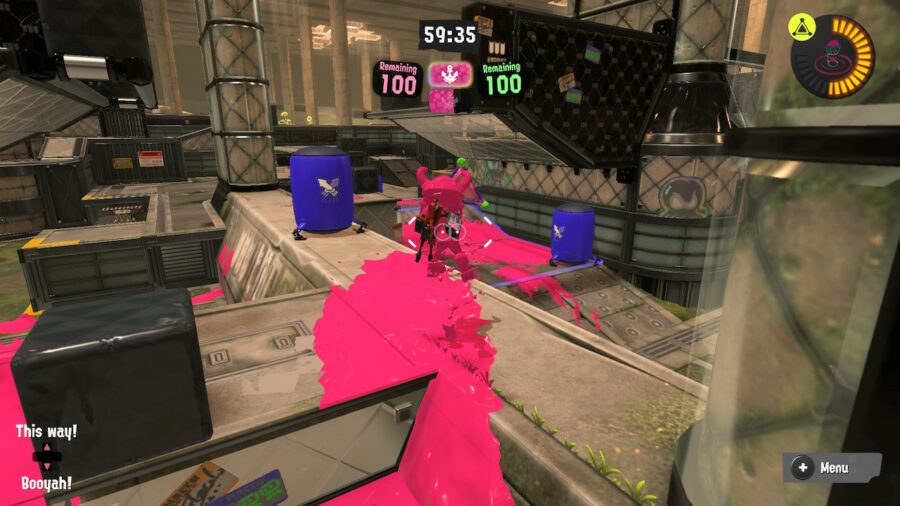 Splat Zones is a rather simple mode in Splatoon 3 when it comes to the basics. The difficulty is mastering it.

In Splat Zones, each team of four converges into the center of the map, where either one or two glowing marked territories will appear. The aim of the game is to take control of the zone (or both zones if two exist as seen on maps like Undertow Spillway), and then retain control of these zones until your points reach zero. The winner is the first team to count their points to zero, or whichever team has the lowest score at the end of five minutes if no winner can be determined in this time.

One key point to remember is that you don’t need to fully paint the zone to attain control. After roughly 70% of the zone has been covered, the zone will count as being within your team’s possession, and the game will automatically cover the zone in your team’s ink as it starts counting down. If half of the zone is reclaimed by your opponent, the timer will stop until either your team reclaims 70% (in which case the countdown will resume), or the opposing team claims 70%. At this point, the zone will be covered in your opponent’s ink, their score will count down, and your team will earn a small penalty added to your score.

The ultimate aim of Splat Zones is to ensure you take and retain control of the zone at the center of the map, a task that requires teamwork and strategy to push your opponent back.

How Do You Score Points in Splat Zones? 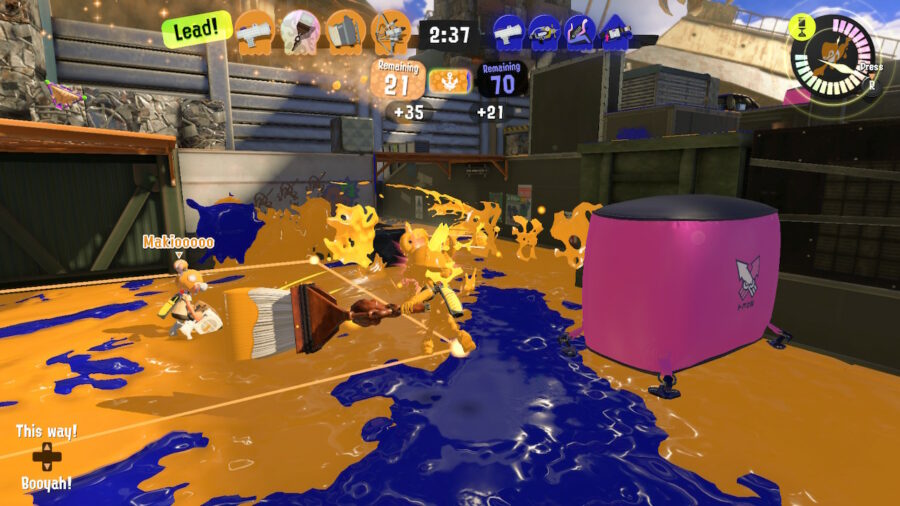 This penalty is marked on the screen in the form of a positive score underneath your main score. This will not impact the score at the end of the game as these penalty points are not added to the score of your team, meaning that a team with 40 points and a +24 penalty at the end of the game will still defeat a team with 50 points and zero penalty, even though 40+24 is a higher number than 50. However, this can serve as a roadblock to scoring additional points as the match progresses, giving your opponent an opportunity to win.

Controlling the Zone in Splat Zones in Splatoon 3 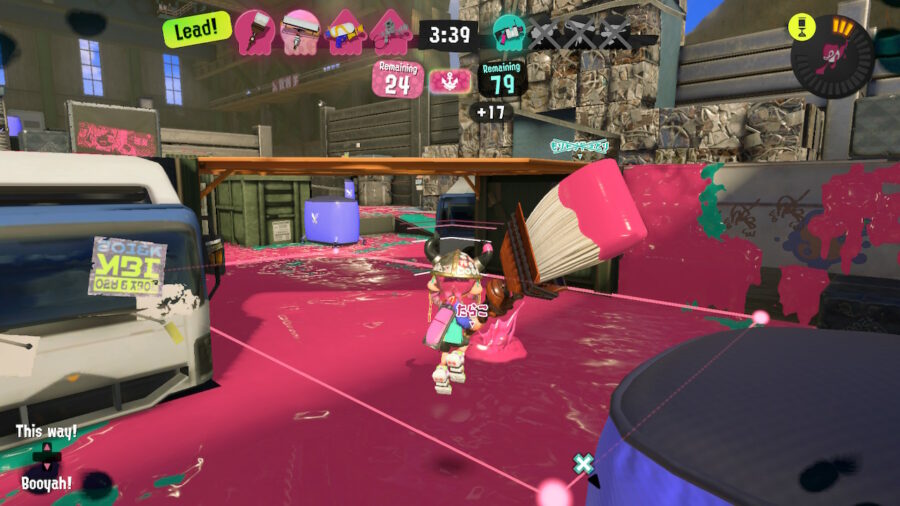 To take control of the Splat Zones in Splatoon 3 and win, it is crucial to claim and retain a strong degree of control over the ink coverage of the map for the duration of the game. For your team to avoid the risk of losing control of the map, it is important to gain control not just of the central zone, but the areas surrounding it and paths directing players towards the zones.

Part of the tactical depth inherent to Splat Zones as a mode is the importance of control over this small zone in the center of the map acts as a natural choke point where players of both teams will naturally converge due to the necessity of assuming control over this area of the arena. Even with this being the case, however, there are still multiple paths players can take to reach the zone, and your team should be capable of protecting against each of these routes in order to stop an enemy assault.

While it may sound counterintuitive at first, once you have assumed control of the map, you should avoid standing or spending prolonged periods of time within the zone while trying to protect it from the enemy team. Not only does standing in the zone mean you are failing to block paths that your opponent could take advantage of to execute an assault on the area, a long-range enemy who can pick you off with a well-timed Splatling or Sniper shot will cover significant ground within the zone due to the splat radius of your death coating the zone in enemy ink. This could be all they need to control the zone and inflict a penalty on your team, which should be avoided at all costs.

Similarly, preparing for such a scenario is going to be the difference between victory and defeat for teams in winning scenarios, with victory relying on either preventing opponents building up the ink power for these specials or ensuring control over the zone is retained after their destructive power is inflicted on the central goal.

Keeping Opponents Away From the Splat Zones 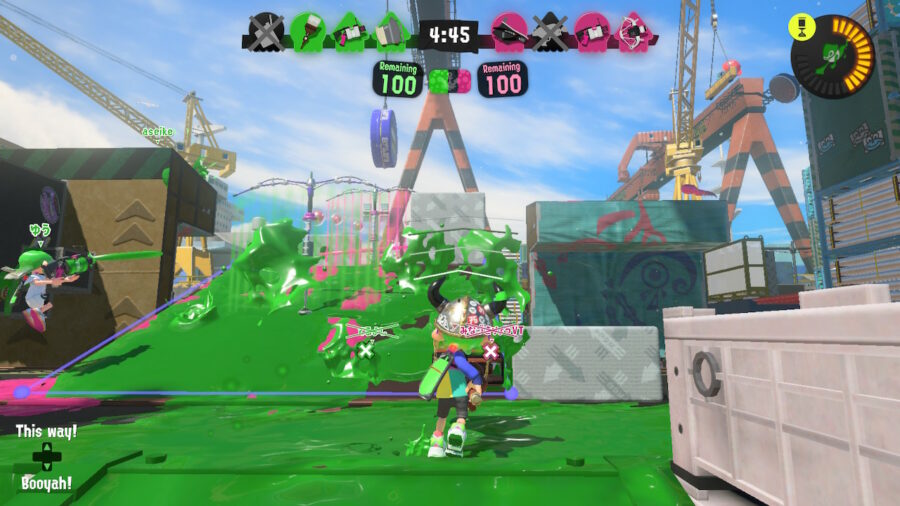 The best way to prevent the enemy team from taking control of the Splat Zones in Splatoon 3 is to stop them from being able to execute a close-range assault on the zone itself. This strategy requires map control, but the best plan for victory involves taking control of the zone in the early moments of the match and continuing to push your opponent beyond the zone to keep the enemy locked in 1v1 battles at a safe distance from the all-important zone, all while counting down your score.

A balanced team composition for Splat Zones should feature a range of weapons able to quickly cover the Splat Zone from a close distance (think brushes, buckets or blasters) while being effective in 1v1 battles, alongside long-range weapons that can exert a heavy degree of control of the map while remaining protected from a distance, particularly the Splatling.

The player using the Splatling should retain a distance from the action. Instead, inflict damage and exert control over the map by preventing enemies from approaching, all while staying at a distance where the enemy finds it impossible to attack them due to their inability to get closer to their position.

An effective team working together should keep an opponent from the zone by engaging them in battles from a distance while a player using a Splatling or a Sniper can pick off enemies while remaining immune from enemy damage due to the range of their attacks.

If executed successfully, control over the map in the early stages should be retained throughout the match as enemies find it difficult to break through an aggressive offensive front line and defensive Splatling in defense ensuring any enemies that do flank your team or take you by surprise are quickly defeated.

What are the Best Weapons for Splat Zones in Splatoon 3? 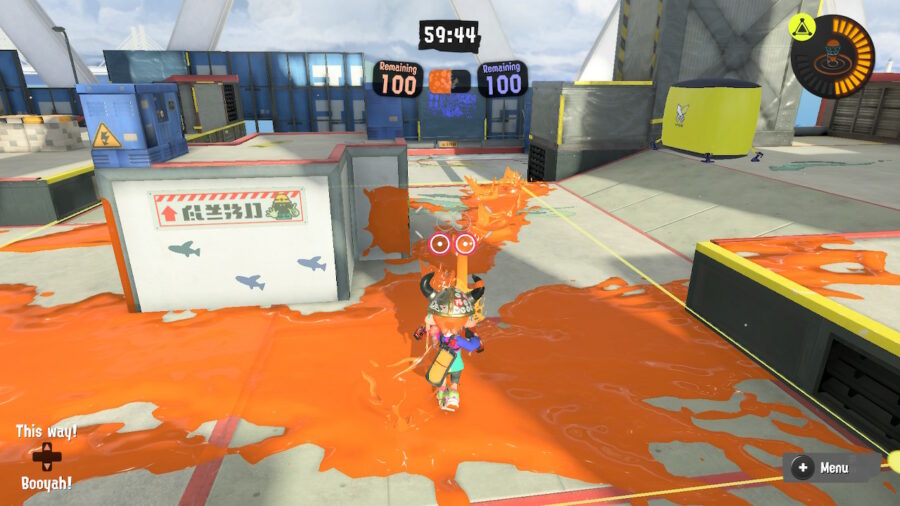 The best weapons for Splat Zones in Splatoon 3 are those that can balance strength with ink coverage capabilities that can assist in retaining control over the zone while keeping opponents at bay. We recommend every team in this mode takes advantage of a Splatling, short-range shooters or dualies, and a brush, in order to take control of the zone quickly with fast-firing weapons with wide coverage while exerting pressure on opponents in either winning or losing positions to retain the lead or turn the tide of battle. Balancing the need to push for the zone, flank opponents, attack enemies and cover vast areas of the map with ink to ensure it is possible to exert pressure on the all-important zone make team composition and weapon choice.

Our choice of Splatling in Splat Zones would be the Heavy Splatling or the Hydra Splatling. Both of these weapons benefit from bomb subweapons and offensive specials while having a long distance and high strength. These stats make it effective as a backliner weapon firing from a distance, with the Booyah Bomb equipped to the Hydra Splatling making it our preferred choice due its ink coverage capabilities and the way it can be used to take over the zone if necessary.

We additionally recommend the Octobrush as a strong weapon of choice for Splatoon 3 in Splat Zones. This weapon is not only strong at short distance 1v1 battles when duking it out against an opponent on the front lines, the Zipcaster special can be a chaotic distraction that creates an opening for a team push. Using the Zipcaster at the correct moment can allow you to zip into the heart of enemy territory and splat opponents to weaken their defense of the zone.

Even if you are unable to splat an opponent, just jumping temporarily into the heart of the opponent’s area at speed with this ability forces the attention of the team away from the zone and onto you, providing your team with an opening for a major push into the enemy Splat Zone.

For those looking for a more conventional shooter as a weapon of choice, the N-Zap ’85 or the .52 Gal weapons are each effective choices. Finally, for similar reasons to the .52 Gal, another option could be the Rapid Blaster. Beyond the wide splat radius of its bullets, the Trizooka special weapon is a useful weapon for covering enemy turf and the ever-crucial Splat Zone. Rapid Blaster bullets also explode upon being fired, allowing it to hit enemies even if they are hiding behind a corner or box, a common scenario in Splat Zones.

How to Improve at Splat Zones in Splatoon 3 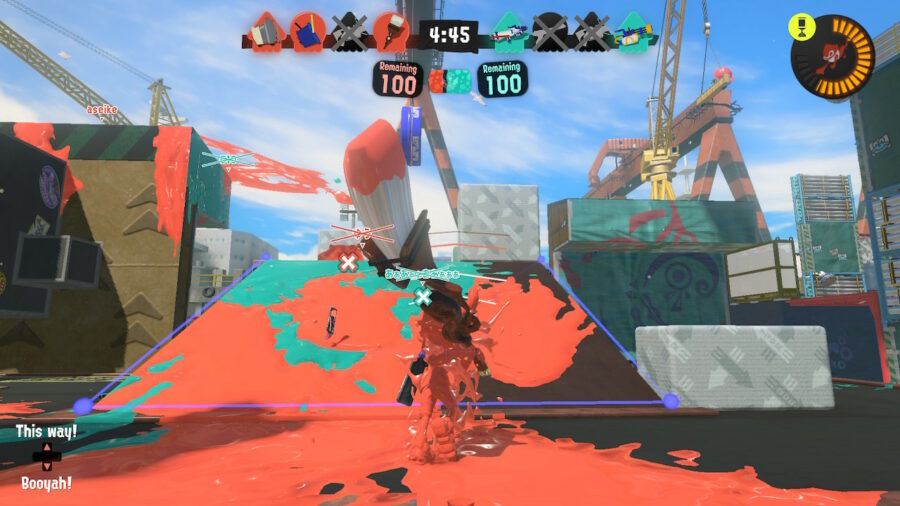 Improving at Splat Zones in Splatoon 3 requires a lot of understanding of the map and enemy positions, as well as the most effective use of your crucial special weapons with their ability to turn the tide of a fight if used correctly. Taking control of the Splat Zone is a surprisingly simple task in this mode, but retaining control for any length of time necessary to win a match requires a mastering of the fundamentals and disciplined control of the map.

It may sound overly simplistic, but improved accuracy with your shots to close out 1v1 battles will prevent a space from opening up for your opponent to approach the zone, and regularly checking the map to gain an understanding of enemy positioning can allow you to predict an upcoming flank against your team or know where they may strike next so you can take them on with the element of surprise.

Similarly, ensuring your focus remains undeterred on controlling the zone without getting distracted by the thrill of the kill could be the difference between victory and defeat. If straying from your position to splat an enemy player leaves space for another player to unleash their might against the zone and the team you left vulnerable.

Tactics are a major part of improving in Splat Zones. A balanced team comp that can retain control from afar and an effective, accurate short-range assault weapon to take on enemies from the front are the key to victory. Control is what you need in Splat Zones in Splatoon 3, and focus is more essential than in any other mode to not let that control slip for even a second.