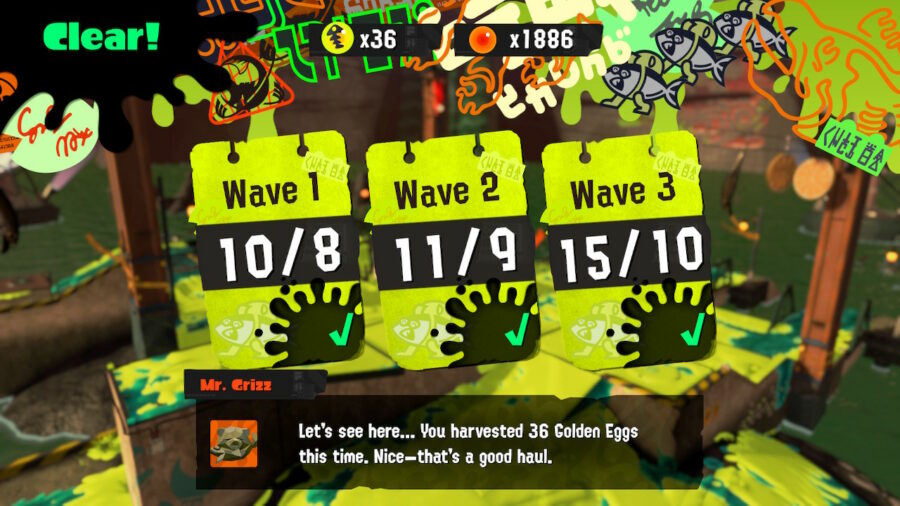 Salmon Run is a substantial side mode in Splatoon. First added in Splatoon 2, it returns in the third game as a fleshed-out supplement to the game’s main battle types. It’s a good pick for players who like teamwork more than epic esports kill compilations: unlike the main 4 vs. 4 mode, Salmon Run is a team of 4 against waves of computer-controlled enemies. It doesn’t make you face other players, but when the Salmonids come out in full force it can be a real challenge to keep your head above water. Here’s some basic info for Splatoon 3 Salmon Run to help players get a quicker start in this fish fight.

The goal of Salmon Run is to kill Boss Salmonids and take the Golden Eggs they drop to the provided basket. Gather enough before time runs out, and you win. Simple. 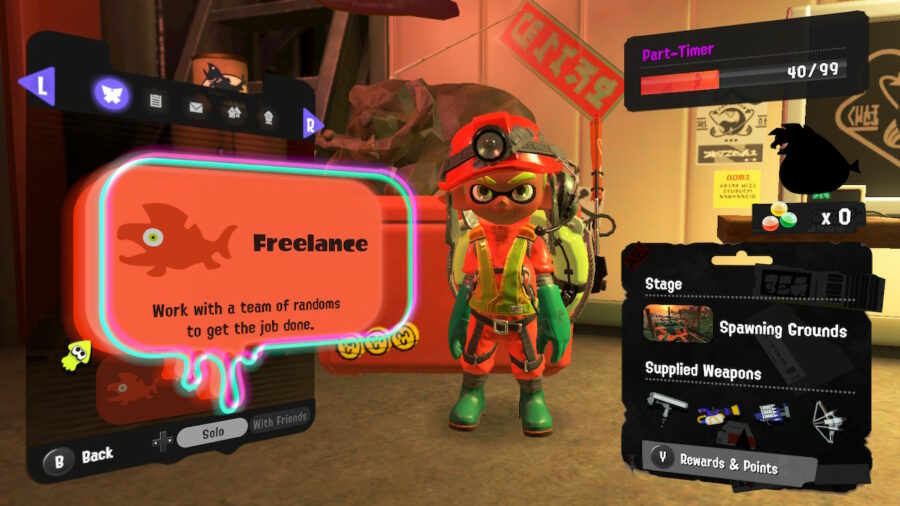 Wait, hear me out. There’s a proper time and place for it. Players just starting Splatoon 3 might want to avoid this mode at first. It’s more complex than default modes, including a bunch of unique mechanics that require explanation. It also forces you to use a random weapon that changes between waves. These weapons could be from deep in the unlock list, so a player with just the Splattershot Jr. will quickly find themselves lost when handed a paintbrush mid-fight.

It makes sense to start with a bunch of default Turf War or Hero Mode (the single player). They both teach the basics of inking, which you’ll need to know on top of all the unique Salmon Run dangers. The flip side, though, is that Salmon Run lets you try out strange new weapons in a live-fire setting for free. I wouldn’t recommend it, but if a new player is brave enough, they might learn something new. 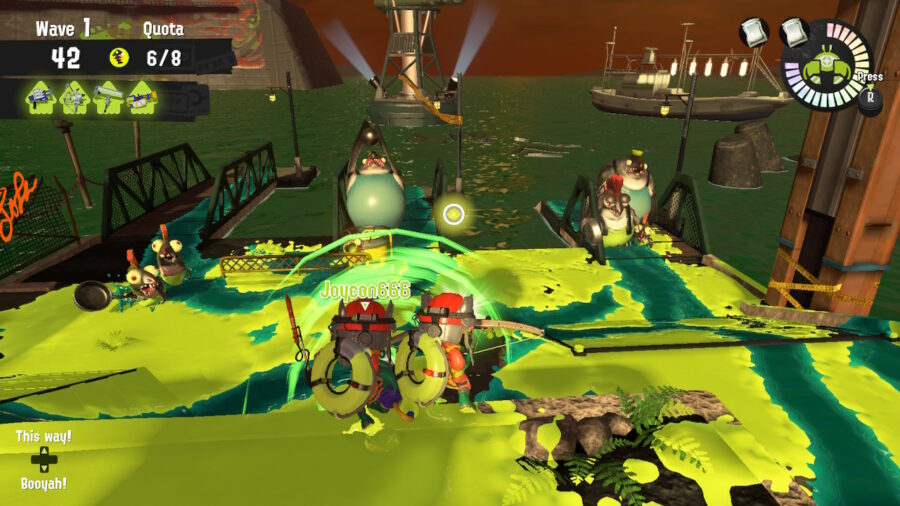 Good teamplay is vital in Splatoon 3 Salmon Run. There’s no map like in Turf War, so being able to manually keep track of your allies’ locations is a must. Being too far away from your team leaves you vulnerable, since another teammate will have trouble reaching your corpse if you die. Being right next to your team also leaves you vulnerable, since many Boss Salmonids have big, splashy attacks that can hit multiple people if they’re grouped up. You have to be close enough to provide support, but not close enough to become collateral damage.

Communication is a little more important than usual here since there’s no map. Call out “this way” if you need your team’s attention. It changes to “help” if you’re dead, making it slightly more obvious where your teammates should look for your body. Don’t forget to “booyah” when the prompt comes up – that’s someone using the Booyah Bomb. 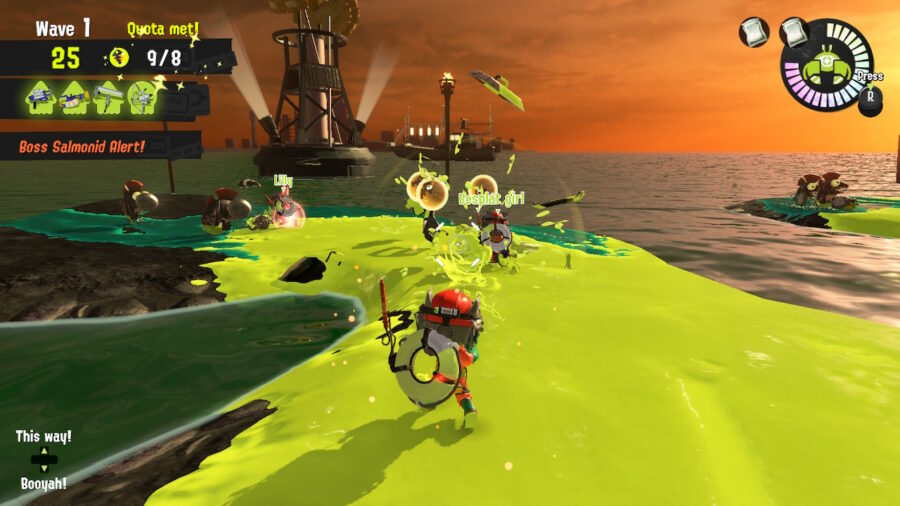 Some Splatoon 3 game mechanics are especially important in Salmon Run. Inking the ground won’t earn you points or charge your super meter, but ink means safety. Paint the floor whenever you can. Speaking of super meter, in Splatoon 3 Salmon Run each player gets two supers for free. It’s tempting to want to hoard these like any other video game consumable. There’s a principle in roguelikes that applies here, though: If you die without using your consumables, that’s a free option you chose not to use.

There’s a special move in this mode as well, unique to Splatoon 3: the Egg Toss. Hold and release the Golden Egg deposit button to fling your egg forward like a grenade. It lets players score from a distance – it’s fast and you’ll look cool doing it. Great for last-second saves. Be aware that it consumes a lot of ink. The same as a grenade: two thirds of your tank. If you use it strategically, though, it has several applications. For example, you can transport multiple Golden Eggs by throwing them individually.

Splatoon 3 Salmon Run: Why Are These Boss Fish So Evil? 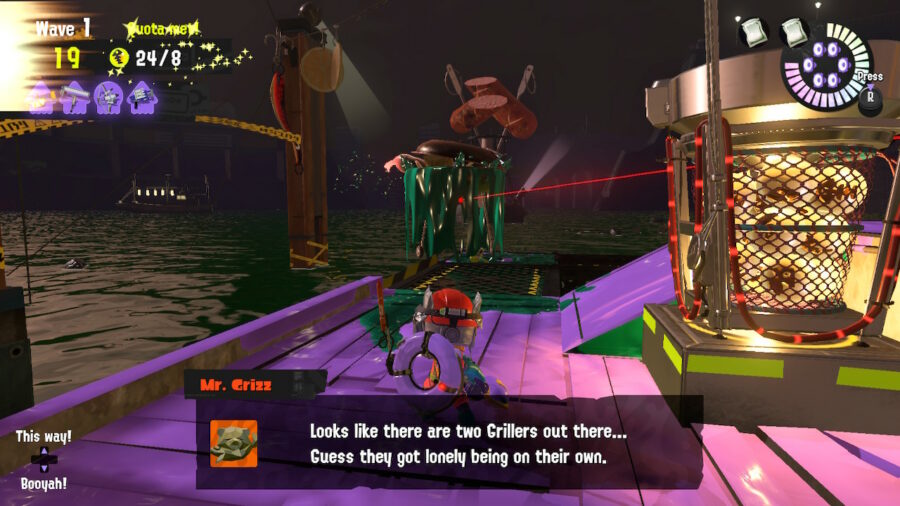 The core challenge of Salmon Run is dealing with the threat of multiple Boss Salmonids at the same time. Many of these are simple to deal with – shoot them until they die – but a few take a little extra effort. All of them have strategy tips in the in-game handbook, as well as a practice option in the “not basics” section. Here are some specifics to watch out for. 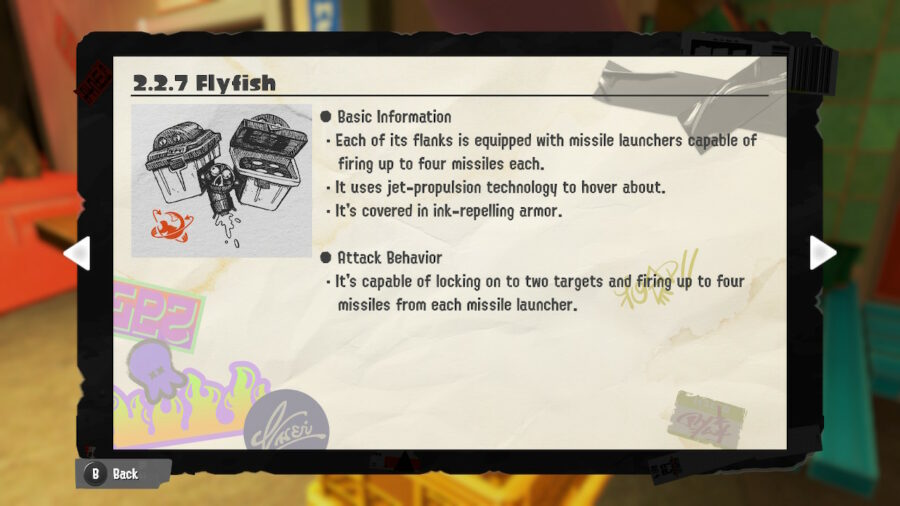 The Flyfish is a problem. It looks like a little guy with two garbage buckets strapped to it. Naturally, it can fly. It’s invulnerable unless its buckets are open, and can only be damaged by a thrown bomb in the bucket. That’s an expensive projectile at fairly close range that has to be aimed carefully and quickly, before the bucket closes again. If your team (understandably) decides that’s too much trouble, the Flyfish will continuously launch high-damage missile strikes on everyone. This is the deadliest Boss Salmonid in Splatoon 3 Salmon Run. It should be your priority target whenever it appears.

Splatoon 3 Salmon Run: The Bonus Round 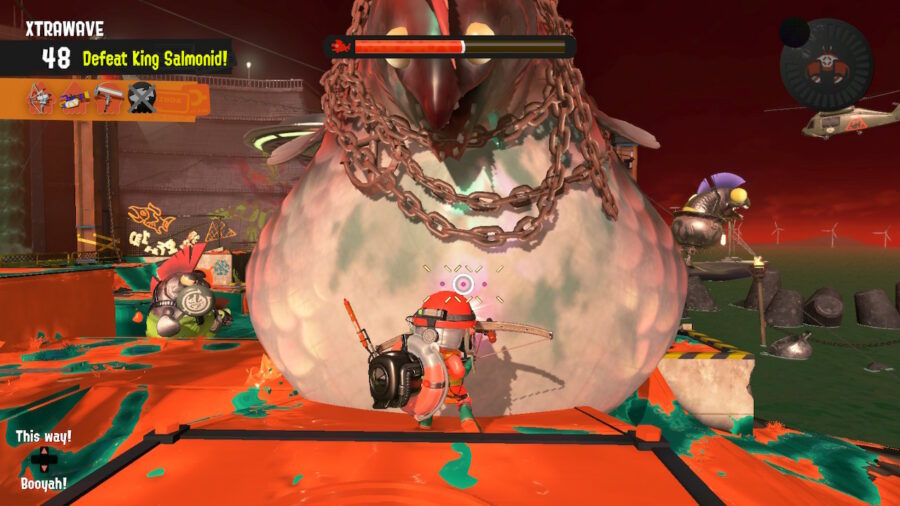 The climax of Splatoon 3 Salmon Run is when the big friend appears. This can happen at the end of a third wave if any of the participating players have a full King Salmonid bar, which fills after successful Salmon Runs and isn’t visible to other players. In other words, this could happen anytime, so don’t celebrate too early. The victory chime will sound distorted when the King is approaching. King Salmonid is horrifying, but it’s a good thing for him to show up. Even if he kills everybody, you get all the rewards from the preceding waves, along with a bonus based on how much damage the King took.

Of course, it’s better to win. The King takes damage from your ink, but the best way to fight back is by killing the Boss Salmonids around him. That keeps your team a bit safer and spawns Golden Eggs, which are used as powerful cannon shots against King Salmonid. The more damage, the more scales: a unique currency for buying stuff from the rewards station at Grizzco. 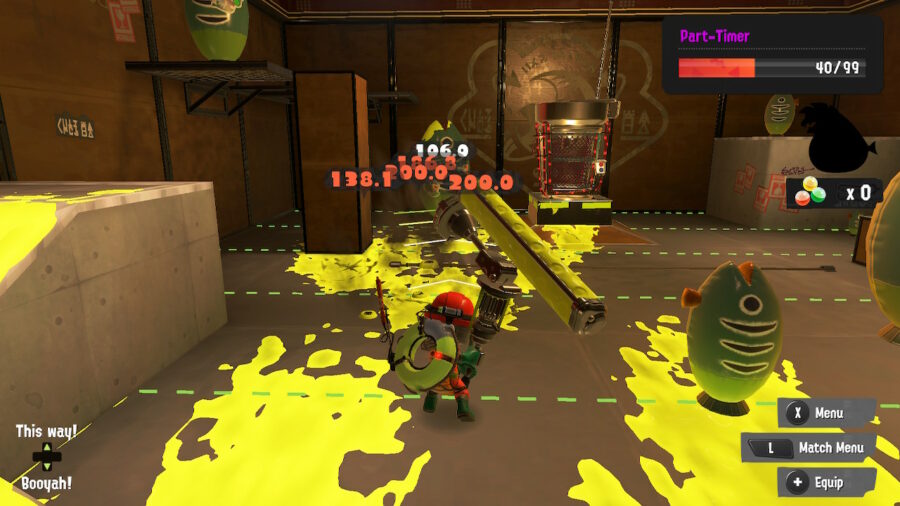 Splatoon 3 Salmon Run is a weird alternate mode compared to Turf War, but it’s worth trying. Doing well earns you tons of cash for the in-game stores, and it’s a fun challenge to boot. The stage and available weapons rotate every couple of days, so if it’s not going well, it can be worth waiting for next rotation. Just like the Turf War lobby, it has a dedicated training room to help you practice with the weirder weapons.  The unmarked blue crate by the Grizzco terminal lets you switch between them during practice. Remember, you’re forced to use all four sooner or later, so getting good with every one of them will benefit your Salmon Run efforts.