Splatoon 3 Clam Blitz: How to Play and Improve

Get out of your shell! 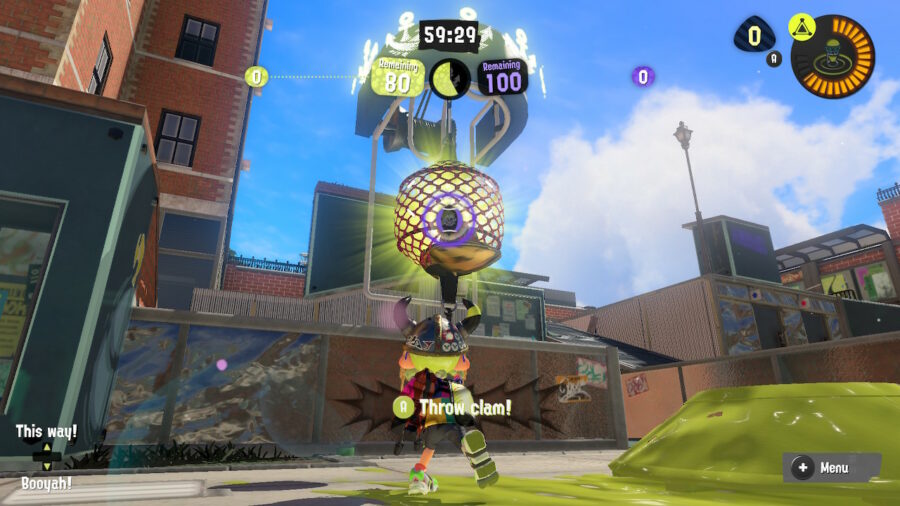 Out of the four ranked modes available in Splatoon 3, Clam Blitz is likely the mode that is least familiar to most players. Unlike the other three Anarchy Battle modes available in the game which have each been available since the very first title in the series released on Wii U in 2015, this mode was only introduced in Splatoon 2 in 2017. Even now, it remains a source of difficulty for many seeking to rise the ranks in competitive Splatoon.

This guide looks to fix that, bringing your skills from the doldrums of B rank to the dizzy heights of S tier play. Keep reading for everything you need to know about how to play and improve at Clam Blitz in Splatoon 3.

What are the Rules of Clam Blitz? 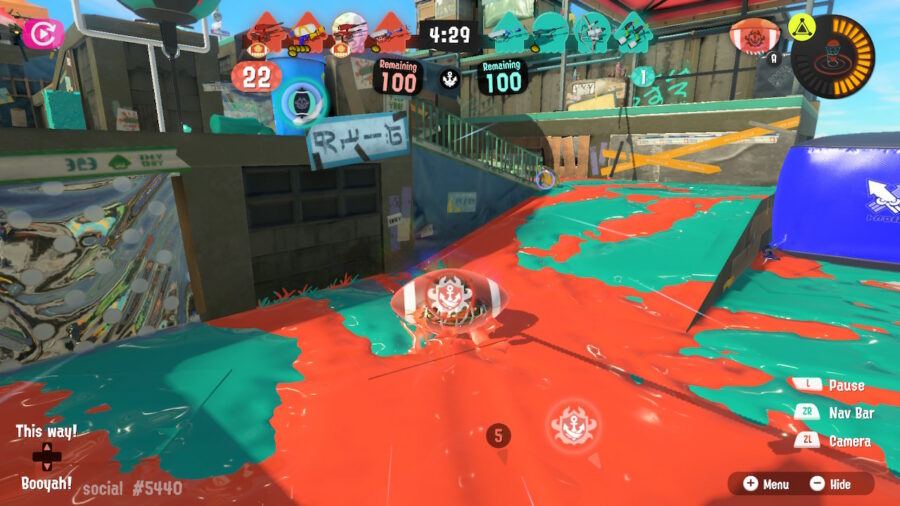 Clam Blitz is perhaps the most complex of the ranked modes available in Splatoon 3. The aim of this mode is to collect clams strewn across the ground all across the map until you collect eight clams. At this point, the trail of clams following your player will turn into a sturdy football. Each team has a balloon and a net in their base area, and the aim of the mode is to take these footballs into enemy territory and throw them against the balloon hanging over your opponent’s net.

At this point, the ball will burst, scoring your team 20 points. Also, the net will be vulnerable, allowing your teammates to throw footballs or regular clams against the net to score additional points as you attempt to reduce your points from 100 to 0. Throwing footballs or clams into the net will briefly increase the duration of time the net is left open, with the net sealing up after a period of time where no balls or clams have been thrown into the net.

Finally, the net will retreat to once again be protected by a giant balloon. This balloon will be invincible for a limited time, and the team who was scored against will receive a football of their own to restart the action. Think of this like a blend of American football and basketball.

What are Footballs in Clam Blitz in Splatoon 3? 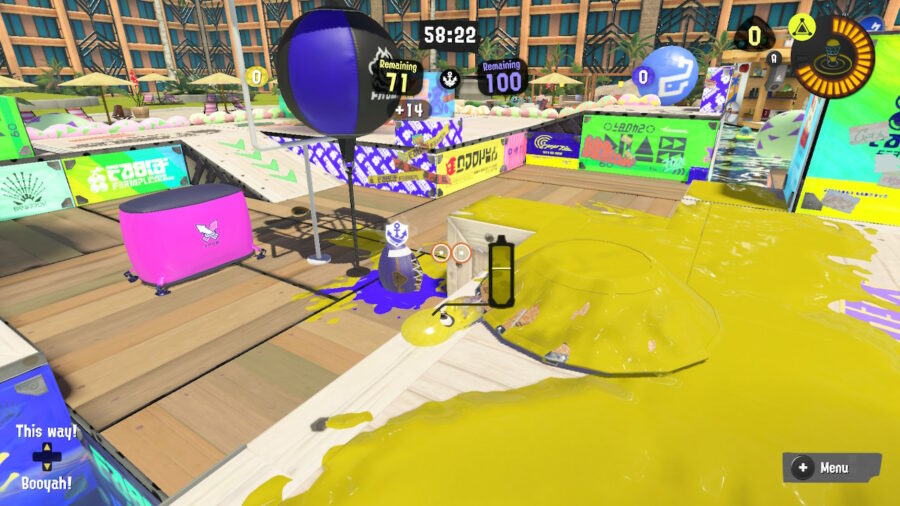 Footballs are crucial to scoring points in Clam Blitz in Splatoon 3, as these are the only objects capable of breaking through the balloon and into the net in your opponent’s area, leaving it vulnerable for your team to score points. Footballs can only be created by collecting 8 clams on a single player.

What makes these balls unique is the risk-reward nature of collecting clams and footballs within Clam Blitz. No matter how many clams you hold in your possession, turning into a squid and entering the ink will render you invisible from enemies until you emerge. If you are in possession of a football, however, your position will be transmitted to all players of both teams, and even if you choose to retreat and swim in the water, the football will remain visible and alert the enemy team of your position.

With this in mind, it is important to remain under the protection of your teammates while holding a football, or only collecting the final eighth clam to create the football close to your opponent’s goal so as not to reveal your position to the enemy team. Due to how crucial this item is to scoring points in this mode, you don’t want to carry the ball from deep in your own territory to your opponent’s goal if it can be avoided, as you will become a very visible target for the duration of time this ball is in your possession.

How do you Break the Opponent’s Net Using Footballs in Clam Blitz? 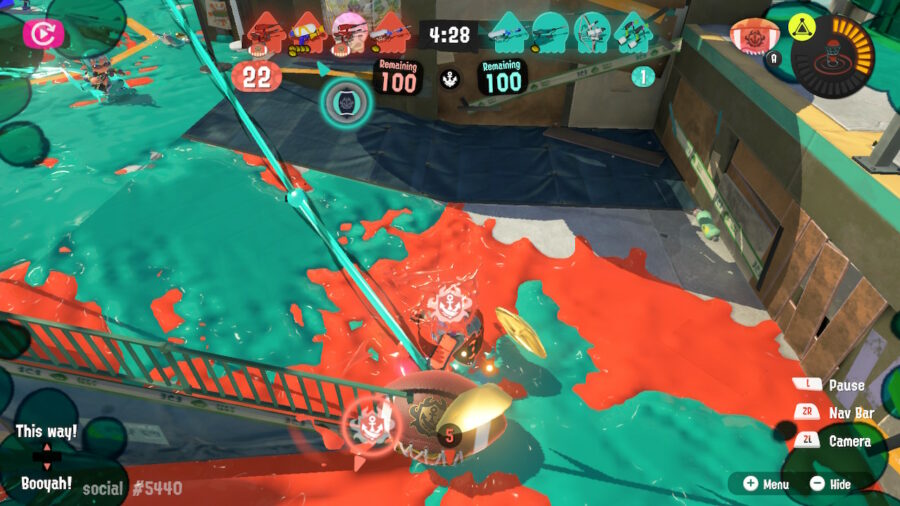 To break the balloon in Clam Blitz in Splatoon 3 and gain the opportunity to score points against your opponent, you must throw a football against the balloon above your opponent’s net. Footballs can only be thrown a limited distance, however, so you must stand very close to the goal before aiming using the R button (the same button used for bombs and other subweapons) in order to successfully hit the goal.

Since the distance between you and the goal can be difficult to judge, there is a small platform near the goal. If you throw the football at the goal from this ledge, you will hit the target. However, it is also possible to hit the goal without standing on this point, provided you are close enough. It is important to check your position before throwing the football: missing the target leaves you vulnerable, and if you are splatted at this moment, you may cost your team a crucial opportunity to score points in this difficult mode.

When is the Best Strategy to Score Points in Clam Blitz? 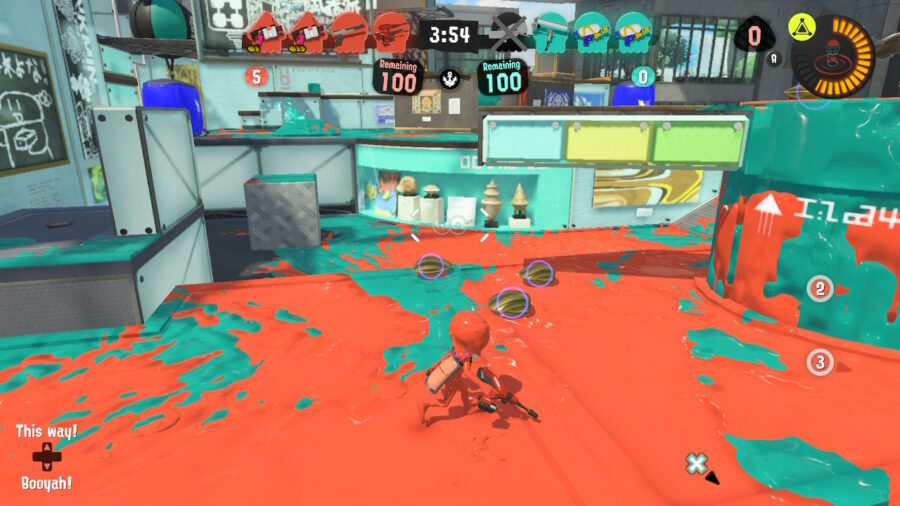 The best strategy in Clam Blitz in Splatoon 3 requires teamwork and planning for when the right moment is to create a football, or using a teammate’s push towards the goal as a chance to super jump directly to the goal.

Creating a football is going to reveal your position and make you a target, in turn making it harder to carry the football towards the goal. So, the aim should be to create a football as close to the goal as possible. There are numerous ways to do this, including refusing to collect enough clams to create a football. By retaining only seven clams in your possession at any one time, it’s possible to remain hidden from view of your opponents while still being very close to possessing the necessary number of clams needed to create a football and score points.

In this position, work with your teammates to splat the enemy team and create a path towards the goal. Then, when you are close to the goal, collect an eighth clam from your teammates. This will create a football when you are already in position, immediately throwing the ball in order to score points.

What if you have a football and are nowhere near the goal, such as the free football gifted to your team after your own goal has been breached? While it is possible to carry this ball directly to the goal by swimming and fighting your way through, this is far easier said than done. A better strategy would be to wait until your teammates have already splatted your opponents or made it to the goal, at which point you can super jump directly towards them and score immediately, without having to risk being splatted by making the trip to the goal individually or with your teammates.

A third option is to take advantage of specials that allow for fast movement across the map that also allow you to carry the football or clams towards the goal. Weapons using the Zipcaster such as the Octobrush are not effective in Clam Blitz due to in-game limitations preventing you from throwing clams while using this special. Alternatively, the Reefslider is a useful special in such a situation depending on the map.

On maps such as Museum d’Alfonsino it is possible to slide from the side of the map right towards the goal. While the football or clams will shoot away in a radius around you upon the explosion of the Reefslider, the explosion should create a buffer between you and your opponents that opens an opportunity to recollect the special much closer to the goal, giving you a shot at scoring Clam Blitz points.

What are the Best Weapons for Clam Blitz in Splatoon 3? 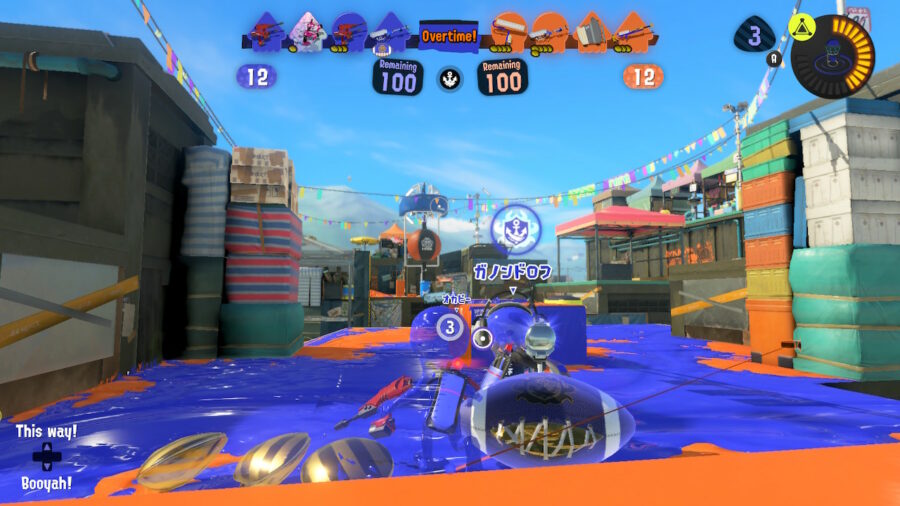 The best weapons for Clam Blitz in Splatoon 3 are those that offer the damage output necessary to slice through opponents whether at a distance or up close. This makes weapons like the Hydra Splatling and E-Liter 4k very useful long-range, high-damage weapons that can disrupt enemy clam collection and moves towards the goal. This impressive range also allows you to take a defensive position that makes it more difficult to be flanked by your opponents.

Another powerful weapon is the Splat Roller. This basic option of roller benefits from a great sub and special that compliment a mode like Clam Blitz well. It is possible to swim behind a Curling Bomb for a fast approach towards the goal or an enemy for a splat, while the Big Bubbler is great to provide a safe spot for teammates to jump towards or to attack opponents while the weapon’s diameter makes it difficult for them to approach you inside the area of the Bubbler to mount an offensive attack against you.

Finally, we recommend the Dark Tetra Dualies. While this weapon does suffer from being a weaker Dualies choice to most others in the game, the sheer number of rolls it is capable of executing in one go make it difficult to target and even make it possible to roll towards the goal. We still wouldn’t recommend doing this, particularly alone, unless used as a desperate, last-ditch maneuver where there’s a last minute attempt to snatch victory from the jaws of defeat. The key advantage this weapon has is its access to the Reefslider to slide a football directly into enemy territory.

How to Improve at Clam Blitz in Splatoon 3 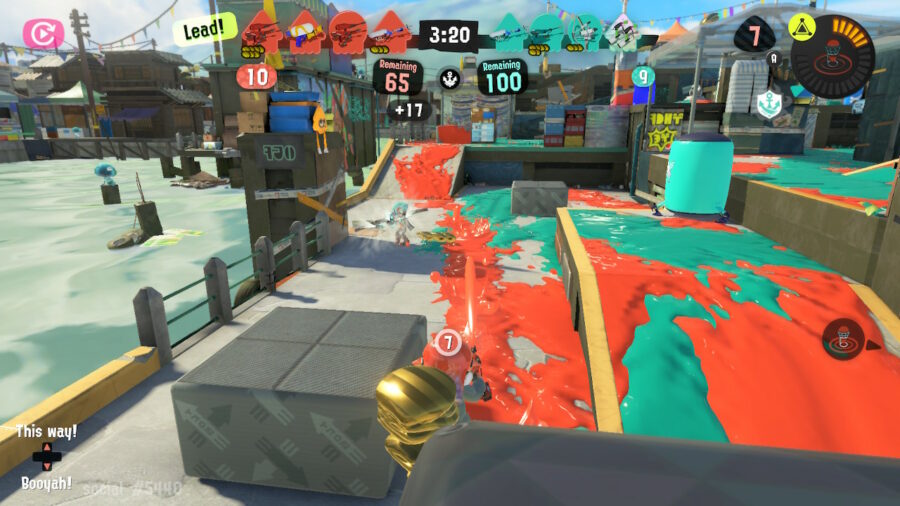 Ultimately, Clam Blitz is a heavily teamwork-based mode within Splatoon 3, where success is impossible without working with your teammates in order to score points. This can admittedly be difficult when not playing with friends as it is difficult to communicate a strategy with other players. But adapting your play to your teammates and working with them, not against them, will massively improve your win percentage in this difficult competitive mode.

A key piece of advice would be to avoid trying to take on enemies or attack the basket alone. Not only is it difficult to carry a football into enemy territory without support, even if you succeed at bringing the ball to the goal, it is unlikely you will score any more points than the 20 points received for breaking the basket. Without teammates to capitalize on the vulnerability, continuing to score points and massively improve your team’s chances of victory are low.

More so than any other competitive mode in Splatoon 3, Clam Blitz requires teamwork. Only by working with your fellow squids can you guide these kids to victory.