How to Get Better at Turf War In Splatoon 3

Don’t be a fish out of water. 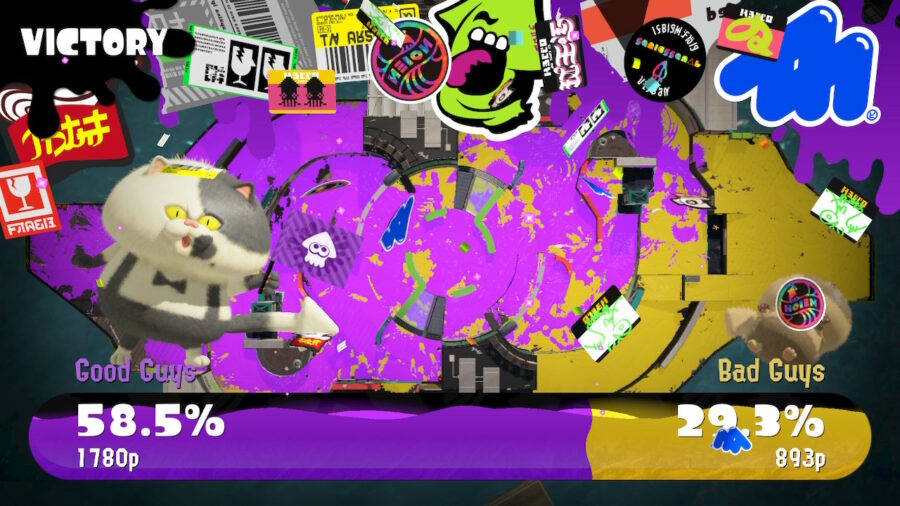 Splatoon 3, Nintendo’s latest entry in their popular mess-making series, is finally here. Coming on the heels of Splatoon 2, also on the Switch, this new shooter retains many features of its predecessor while adding some new stuff. The launch of a new game is a great time for new players to get in on the ink-soaked action, but like any multiplayer shooter, newcomers can have a tough time. Splatoon’s tutorial tells the player how to aim and fire, but that only helps so much when a team of rabid squids with guns is coming to kill you. Here are a few less-obvious tips to help you get better at Splatoon 3 Turf War (the game’s main mode). 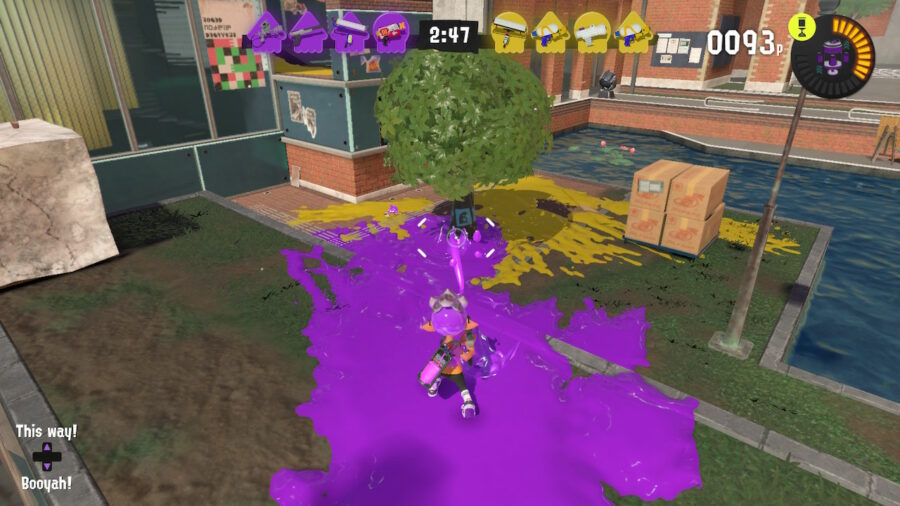 The first thing you should figure out, even before deciding which gun to use or t-shirt to wear, is how to set your controls. Unlike most console shooters, Splatoon includes the option to use motion controls. I’ll be blunt: you should use motion controls. You might have to tweak the sensitivity, but the fact is that aiming with motion is more accurate and much, much faster than holding a direction on a control stick. It might take some time to get used to, but it’s worth it. Consider trying a less intense game mode than Turf War to ease into things.

A common setup is to use motion controls for small adjustments, and the control sticks for large turns. Figuring out what works best for you will take several rounds of live fire. Be aware that getting caught from behind is deadly, and can happen often thanks to ink-based stealth. If you can’t turn and respond to threats from all angles, you’ll be dead before you can respond. As an aside, that also means you should attack enemies from the back or side whenever possible, to exploit slow-turning players who didn’t read this guide.

Stay With Your Turf War Team 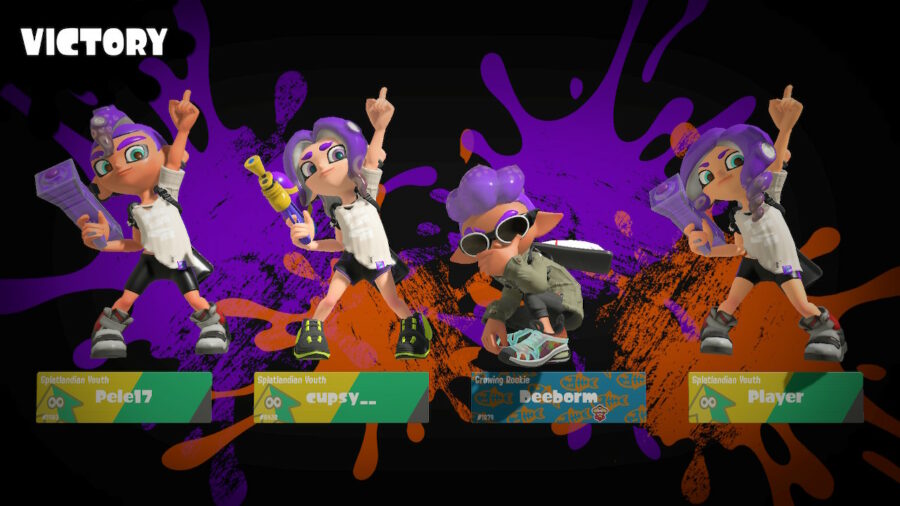 Three is less than four. With limited communication, you can’t easily identify and react to faraway threats during Splatoon 3 Turf War. Try to keep your team within gun’s reach, even if you’re tempted to paint some faraway corner. For example: there’s a healthy debate in the Splatoon community over “inking the spawn,” which is not as vulgar as it sounds. Should players stay behind and cover their starting area with ink, since the winning team is the one with the most coverage? There’s a middle ground here. It may be a good idea to spread out a little at the start, but not enough to break up the team. Consistently winning fights is vital to your team’s overall success, and the easiest way to do that is through sheer force of numbers. Control the center first, go for coverage second.

Keep Up With Things 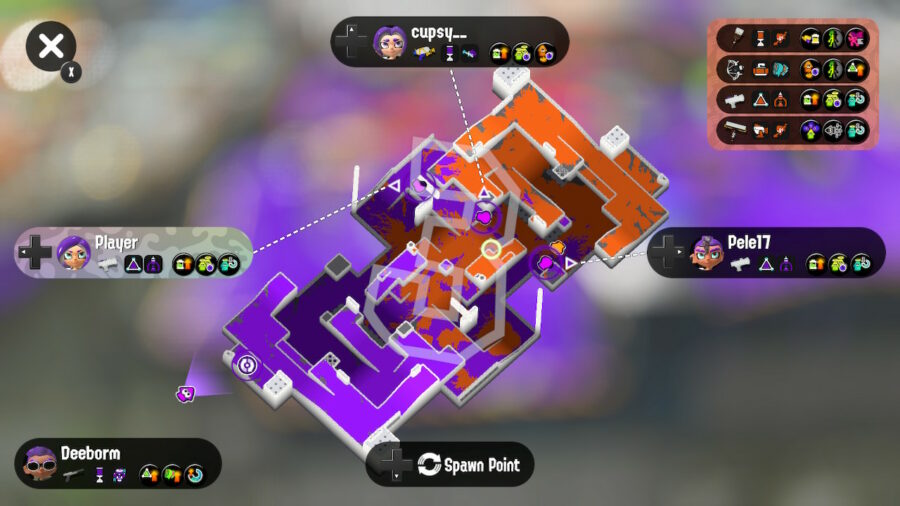 Birds, fish, and Jedi know it, and it’s true in Splatoon as well: Height is power. On several maps, there are alternate paths that lead above the crowd. It’s often worth taking these paths instead of just zerging down the center. From higher up, you can see farther, which helps with assisting your team as mentioned above. It also extends the range of your ink attacks, doubly so if you’re using a long-range weapon.

Pressing the X button pulls up an aerial view of the Turf War battlefield, including the locations of your allies and whether they’ve died recently. This is a good way to track your team, and is also a quick look at the “scoreboard,” since whichever color of ink shows up most is the team that’s ahead. It includes one other feature that’s less obvious: highlighting a teammate and pressing “A” lets you jump to their position!

This jump is a risky maneuver. The spot where you’ll land is visible, and eager enemies can wait to kill you as soon as you arrive. Don’t do it unless your teammate is in a relatively safe spot. Conversely, you should kill any enemy you notice trying to jump near you. If you see a teammate’s name flashing at the bottom of your screen, that’s someone who’s trying to jump to your position. Stay back for a bit and you’ll get an ally delivered to you. If you rush forward, you’ll be responsible for your teammate’s death as well as your own. 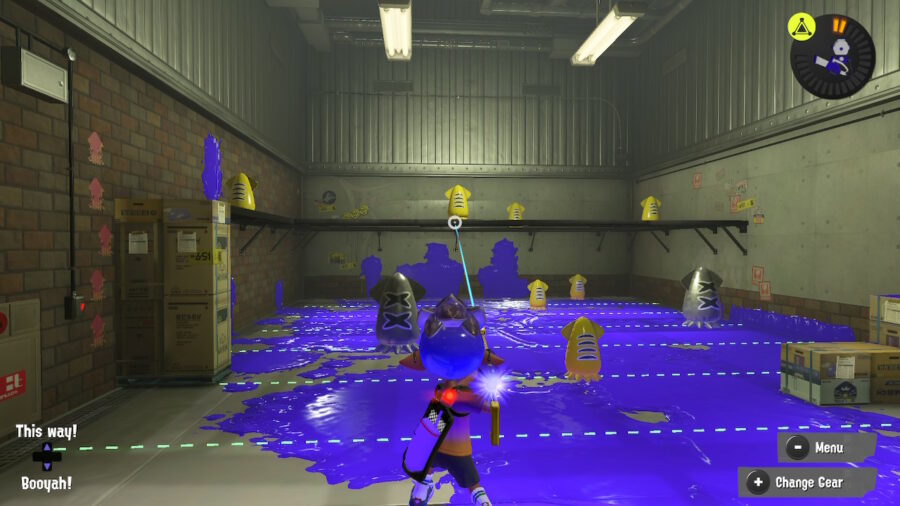 Knowing is half the battle, and there are a lot of battles in Splatoon. The tutorial might be lacking, but there are plenty of ways to learn more about the mechanics on your own. Most useful is the Lobby from which you usually enter Turf War. Its squid-shaped targets pop after taking 100 damage, the same as a player. Knowing this, it’s possible to use them to tell how quickly you can kill with different weapons, and at what range. There’s also a “copy machine” accessed in the room’s options. This is a dummy that attacks you with your chosen weapon. If you’re whining about getting got by a specific weapon, use this function to figure out how to evade it.

Another good test spot is the firing range at the weapon store, Ammo Knights. New players won’t have any idea which of the many weapons to get, but they’re all try-before-you-buy. That includes the ones outside your level range! If you’re not sure where to spend your limited licenses, make sure to experiment with anything that looks interesting before buying. Remember also that using a weapon long enough will earn more licenses for you. The more weapons you actively use, the more you’re allowed to buy.

Splatoon 3 Turf War is hard. If you lose too much and start to get tilted, you’ll play worse and feel worse. Take breaks when you need to. Even if you’re mainly in it for the team battles, the other modes are worth trying. Hero Mode, the game’s single-player campaign, is a great way to review basic mechanics and ease into those motion controls. Salmon Run is another option, a PvE challenge that’s more about good teamwork and less about being trolled by sweatlords. In a worst-case scenario, you could even consider turning the game off – only in order to get better at Turf War, of course.