Everything you need to know about Overwatch’s nefarious hacker, Sombra. 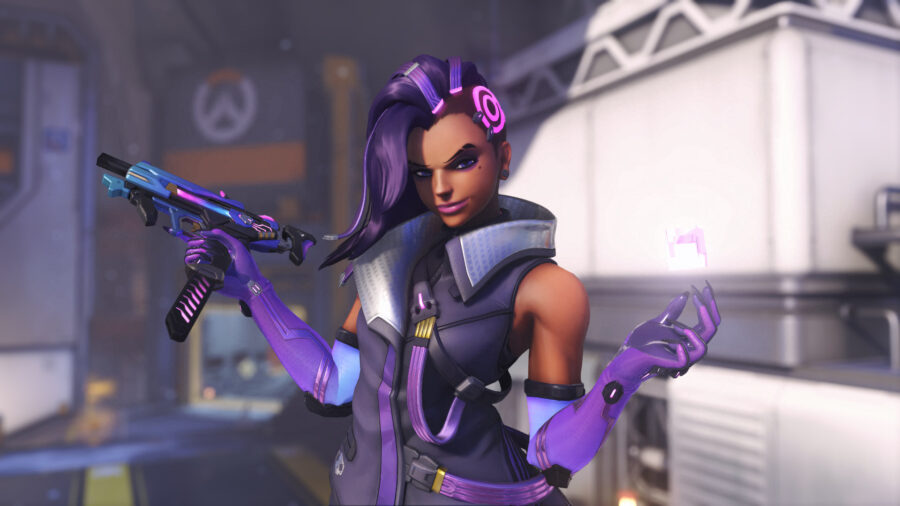 Sombra has a fairly unique playstyle for Overwatch. Being one of the only heroes that can utilize permanent stealth, she’s great at finding unique angles of attack for flanking or seeking out-of-position enemies to isolate and murder.

She used to function as a disabler, hacking her enemies to deny access to their abilities, but this has been toned down in her rework to refocus her kit towards bopping enemies harder. 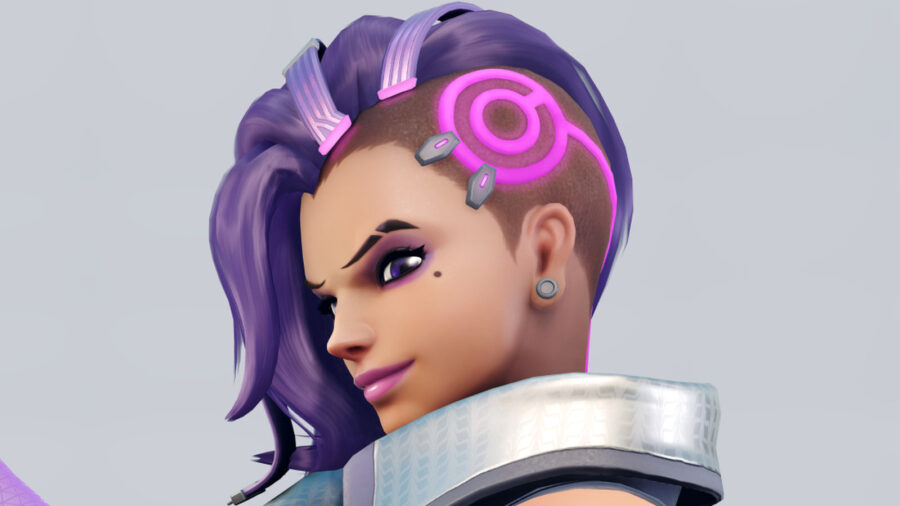 Born in Mexico as Olivia Colomar, she was orphaned during the Omnic Crisis. A naturally skilled hacker, she joined the gang Los Muertos, using her skills to hack the government on their behalf as part of their social revolution.

She became so renowned that she attracted the attention of Talon, the terrorist organization driving much of the background conflict in Overwatch’s story. Agreeing to work for them, she now uses her hacking skills for their sketchy goals. Well, when she feels like it. 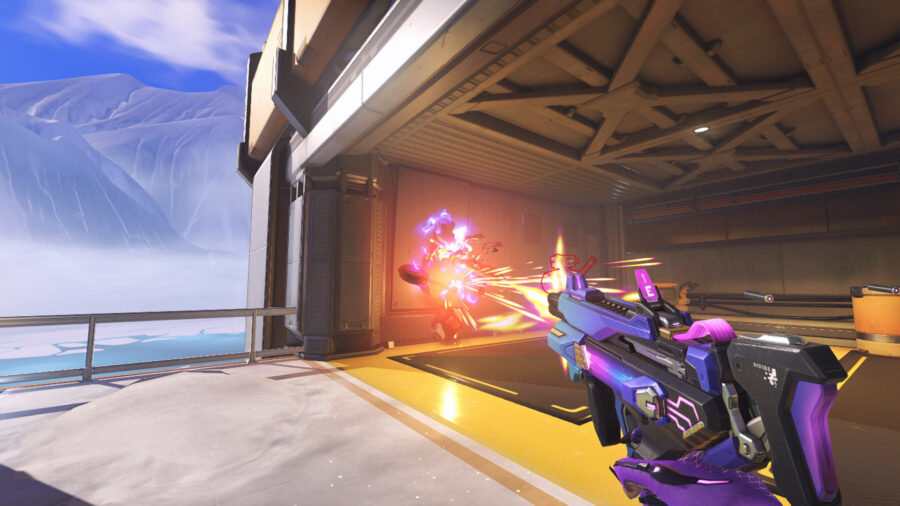 As basic as you can get. Sombra’s machine pistol leaves a lot to be desired compared to other heroes. On its own it does moderate damage, but the spread and mid-range damage falloff makes it unreliable at distance. Making the most of her pistol requires the use of her signature abilities; Stealth to get in close and Hack to boost her damage. 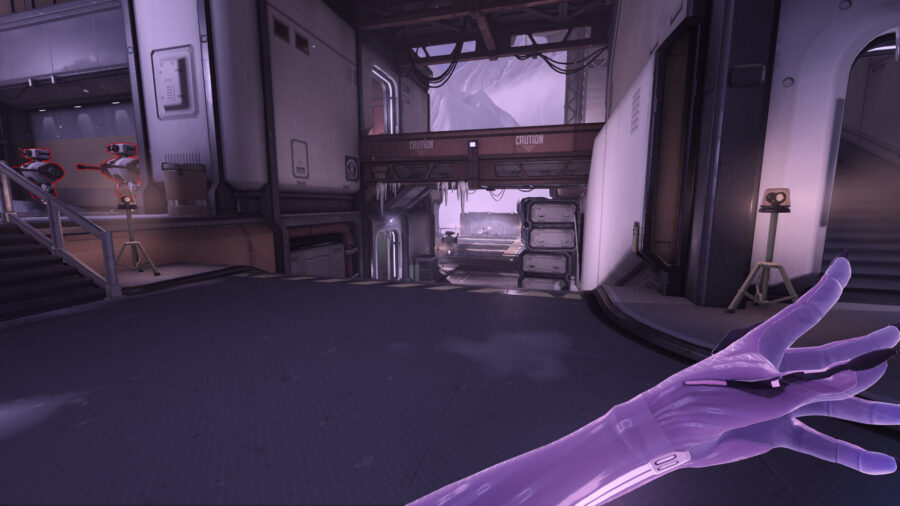 By far the most noticeable aspect of Sombra’s kit is that your enemies don’t notice her at all. Stealth renders her completely invisible to enemies, allowing her to position herself without all the nasty business of getting shot at.

Be warned though, whilst you’re within 4 metres of an enemy or you’re hacking them, you will be visible. Taking or dealing damage will also completely drop Stealth, putting it on cooldown. 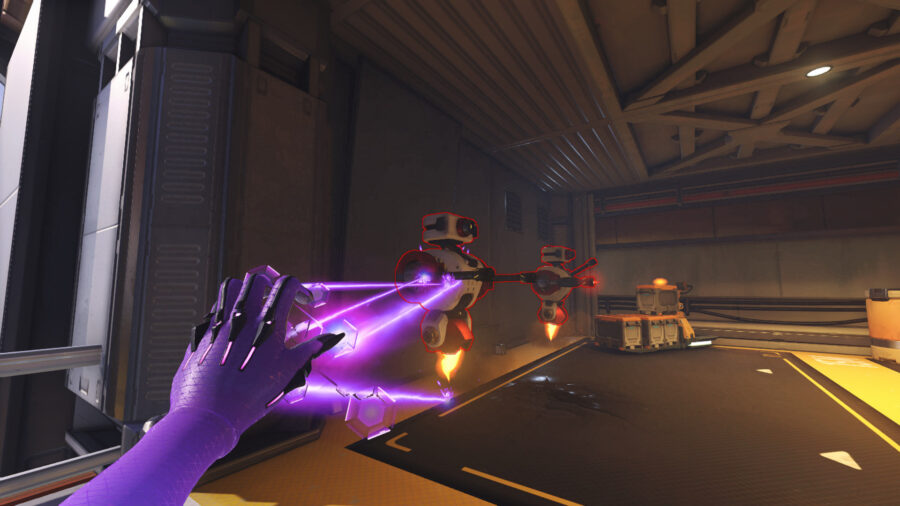 If you thought Hack was important before, it’s now the cornerstone of playing Sombra effectively. Upon successfully hacking an enemy, Sombra will disable their ability usage for one second, and apply the hacked status for ten, enabling her reworked Opportunist passive to increase her damage.

Without Hack, Sombra’s damage isn’t usually enough to kill someone before the enemy team notices and collapses on you. If you use it right you can make some choice eliminations on the squishier enemies. Also, with the new, lower cooldown you can Hack more often. If an enemy manages to survive long enough then feel free to Hack them again to mess with their abilities.

Don’t forget to hack health packs too! It’s a great denial tool if used on them behind enemy lines, and speeding up a health pack’s respawn can get you back into the fight much quicker. 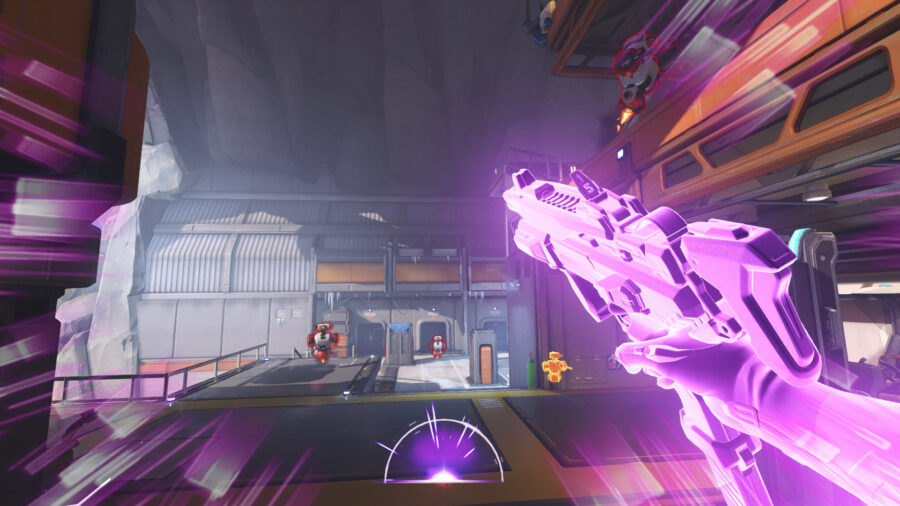 Translocator – throw a beacon, then press again to teleport to it. Cooldown: 6 seconds.

Sombra’s get out of jail free card. Proper usage separates the good Sombra players from the dead Sombra players. Since the enemy team can destroy the beacon, you want to place it somewhere out of the way, preferably close to a health pack. This ability demands knowledge of the map if you want to use it efficiently, as placing it too far from the action means you end up spending most of the game running back into the fray.

For those who like to live on the edge, you can also save the beacon for traversal. You can throw it a reasonable distance, allowing access to normally out of reach places for someone that can’t climb walls or fly. Just keep in mind that the cooldown begins from the moment you throw it, if you teleport right away you’ll need to wait a few before being able to activate it again. 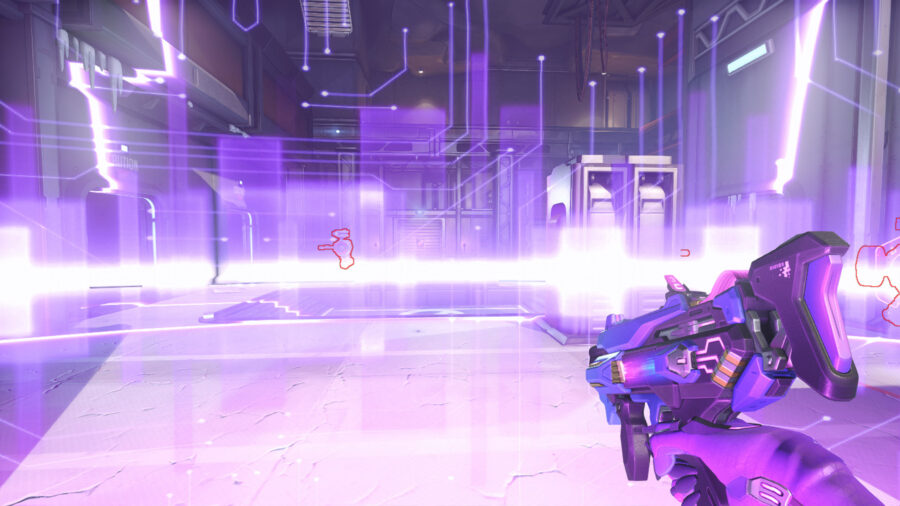 Ultimate: EMP – deals damage equal to 40% of all nearby enemies health, hacking them and destroying barriers around you.

This is the big one. Being able to wipe 40% off of a group of enemies is nice, but coupled with the hack and barrier destruction it’s one of the stronger initiates in the game, assuming your team is ready to take advantage of it.

Try not to use this when you’re alone or there’s only one or two enemies. It works best if you wait till the enemy team has grouped and a skirmish is about to take place, letting  you catch them off guard. A well timed EMP will make the enemy team go into full panic mode, just be wary that it will end your stealth and put it on cooldown.

This is Sombra’s new bread and butter mechanic. With her crowd control abilities nerfed considerably, her hack now functions primarily as a way to buff her damage through Opportunist. This takes her normally middling damage output and puts it on the higher end. Just remember you still need to be pretty close if you want to actually hit people with her machine pistol.

Additionally, being able to track injured enemies helps her stalk the targets that get away. That Pharah over there thinking she’s safe hiding behind that shop counter whilst smashing the “need healing” emote? She was as good as dead the moment you set eyes on her.

All damage heroes now have access to this passive. It’s not exactly game changing, but having it for free is nothing to complain about. Sombra should be able to make good use of this passive, assuming you can secure the kill after dropping stealth, as the bonus movement and reload speed can help you survive against their vengeful teammates.

Changes to Sombra in Overwatch 2 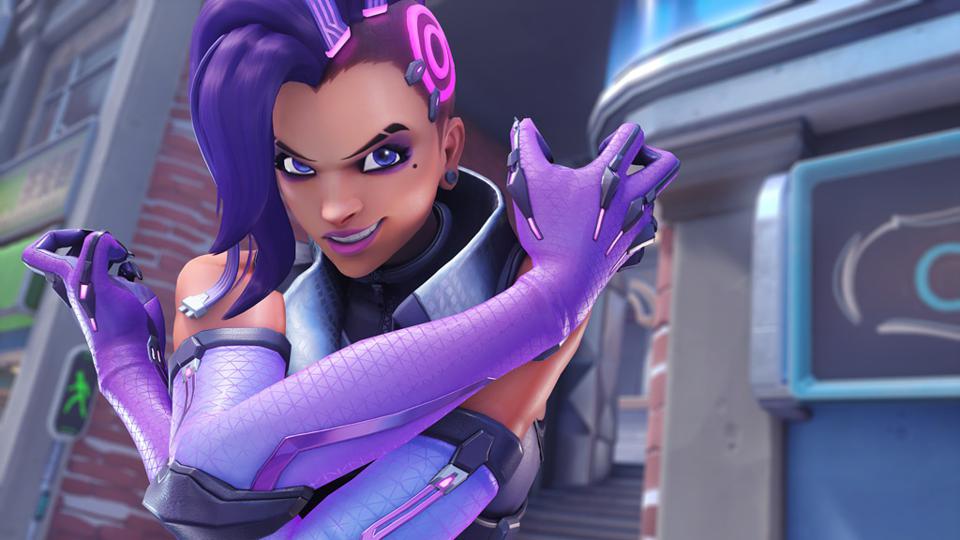 Although Sombra’s Overwatch 2 abilities mostly remain intact from Overwatch, Blizzard have made some minor tweaks that have major implications for how Sombra is played: 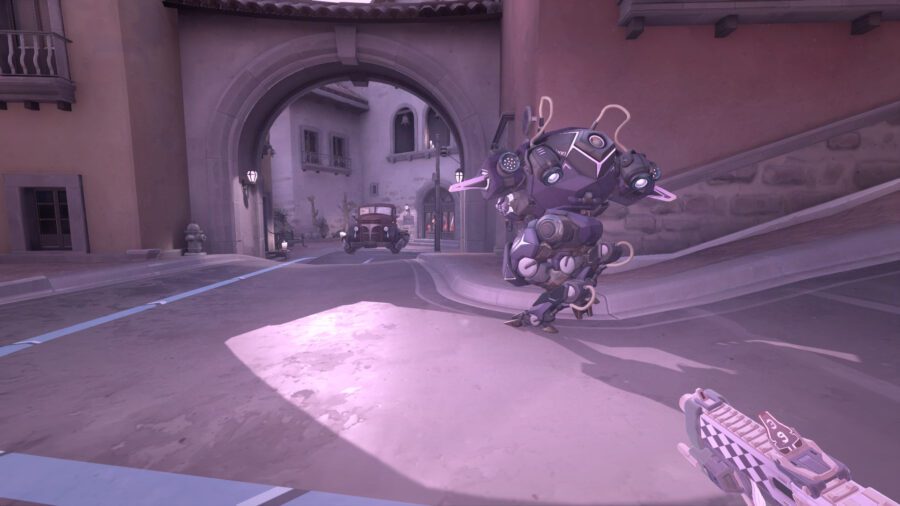 Being a damage role hero, Sombra’s not particularly resilient. Even compared to other damage dealers she suffers when under fire, relying mostly on her translocator to get out of danger. That places a lot of risk on Sombra players if the enemy team is on the ball with smashing your translocator beacon to pieces, so learning the best places in each map to throw it is essential to mastering her. Sombra’s fragility combined with her low range and self-isolating playstyle means that she requires a lot of teamwork to be effective, lest you unstealth to find five sets of guns turned on you without an ally in sight.

Always consider the state of the game before you commit to a strategy. Sometimes taking out the enemy from behind isn’t the right move. You’ll need to learn when to hang back to help and peel enemy flankers, or slip past chokepoints and start capturing the point to force the enemy team to come and stop you, giving your own team the opportunity to push.

Sombra is very team reliant, so it’s always worth considering whether she synergises with the group when playing competitively. Her EMP deals a hefty world of pain to everyone caught in it, but due to the percentage based damage it can’t land a killing blow. To capitalize on a successful EMP, heroes with strong AoE can take advantage of the disarray and help mop up the last of the enemy’s health for a nice team kill.

Heroes that have strong dive potential work especially well with Sombra since they can get into the enemy back line and help Sombra mop up. Heroes like Genji are so mobile that they’ll often be able to keep the entire enemy team on their toes whilst Sombra makes the most of the panic.

Be careful when playing with less mobile teams, especially if your tank is fairly slow. Tanks that can jump right into a fight quickly like D.Va and Winston work particularly well with Sombra since they can easily capitalize on the confusion that she causes behind enemy lines. 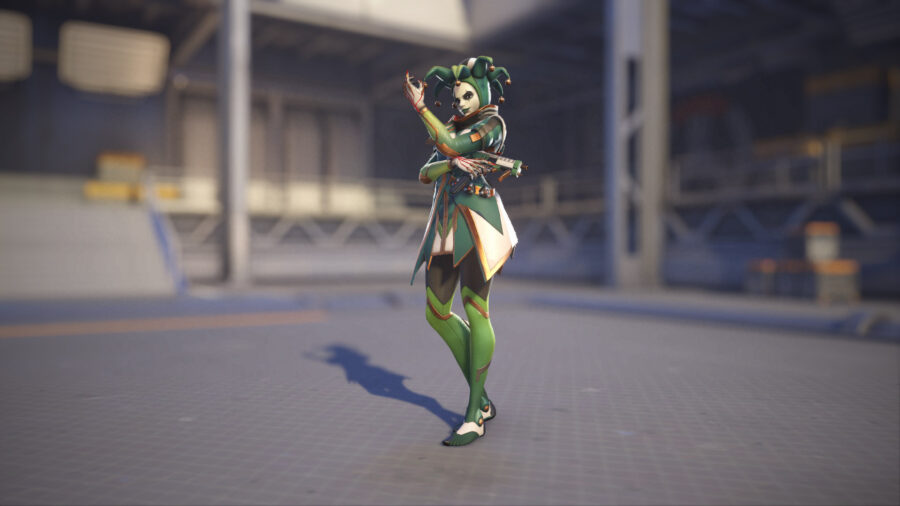 Sombra has 23 skins in Overwatch 2, detailed in the table below.

*These skins aren’t currently available to be purchased so the prices are unknown as of yet.