Overwatch 2: How to Play Reinhardt (Abilities, Skins, and Changes) 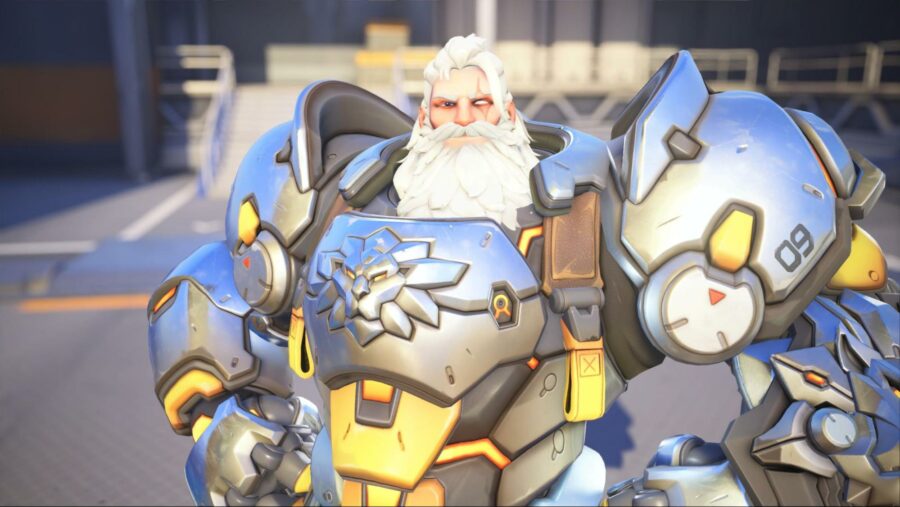 Reinhardt is unique among Overwatch 2’s roster in that he is the one of two characters (along with Brigitte) that utilizes melee for their primary attack. He’s a tank that is most effective when he has teammates to back him up as he doesn’t have a lot of mobility or a gun, but when with great support he can be one of the hardest tanks to kill.

Reinhardt’s giant shield and massive amounts of health and armor make him a great hero for defending, but don’t underestimate his offensive capabilities. Here’s how to become the massive wall that is Reinhardt. 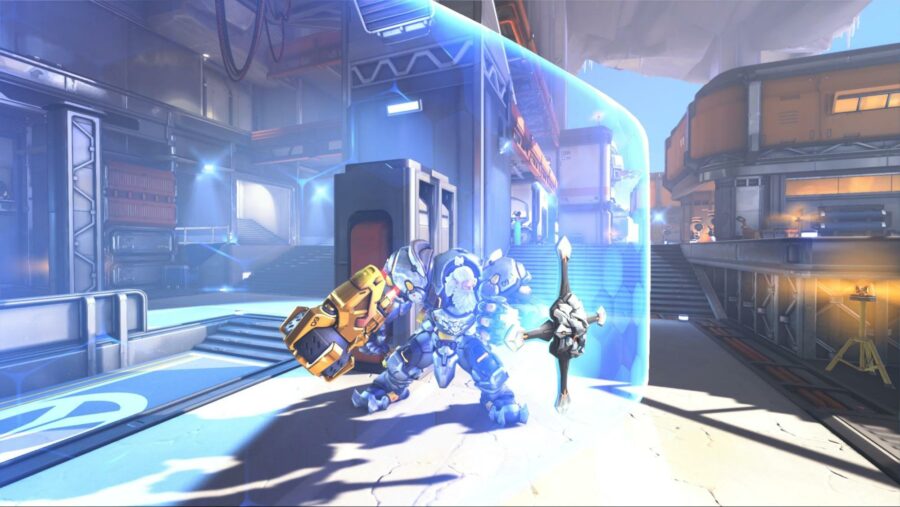 Reinhardt’s primary attack is his huge hammer which he’ll swim from left to right to clobber anyone in front of him. The hammer swings at a nice rhythm allowing you to feel out when you’ll damage your foes. It does do quite a bit of damage and because Reinhardt has so much armor and health you shouldn’t be afraid to get up close and personal.

Reinhardt’s secondary fire is his shield. While you hold it up you’ll move slower, but you’ll block nearly all incoming fire. The shield has 1200 health and is capable of blocking almost any attack. The barrier blocks projectiles and explosions specifically. It can take the full force of a D.VA ultimate, completely block a Cassidy ultimate, and explode Wrecking Ball’s mines without damaging your teammates.

The barrier won’t block all attacks, though. The barrier is incapable of blocking melee attacks and some energy like abilities like an enemy Reinhardt’s Fire Strike and Winston’s Tesla Cannon will pass through the barrier. Some of the more uncommon abilities that it cannot block include Mei’s freeze’s (including her primary fire), Moira’s ultimate Coalescence, and Doomfist’s punch.

Learning Reinhardt’s barrier is the key to mastering him. The barrier will regenerate at a rate of 144 health per second after not getting hit for a couple of seconds. You’ll need to learn when to hold the shield up and when to lower. Once the shield breaks, it will be on a cooldown for five seconds. Once it comes back, it will be at 1200 health again, but those five seconds could be all the enemy team needs to defeat your team.

Although Reinhardt is one of the slower tanks in Overwatch 2, he does have one of the best abilities to close space or escape a fight. Charge uses the rockets installed on the back of Reinhardt’s armor to boost himself across the map. Any enemy that gets caught in Charge will be sent along with him. If they hit a wall or other solid object then they’ll be damaged for 225 points of damage.

Pinning enemies with charge is one of Reinhardt’s most powerful offensive abilities. It can completely kill most heroes with its 225 damage. Unfortunately, charging into an enemy team can get you killed very easily, especially if you didn’t pin anyone. The 8 second cooldown between charges will also make it difficult to escape the enemy’s team’s wrath if you wind up completely alone after a charge.

You can use Charge in an enclosed space to get an easy kill on an unsuspecting enemy or call out when you’re charging so your teammates can follow you into the fray. You can cancel the charge at any time by pressing the ability button again, so using it to quickly move in front of teammates and canceling to hold the shield up is a great way to help your team. 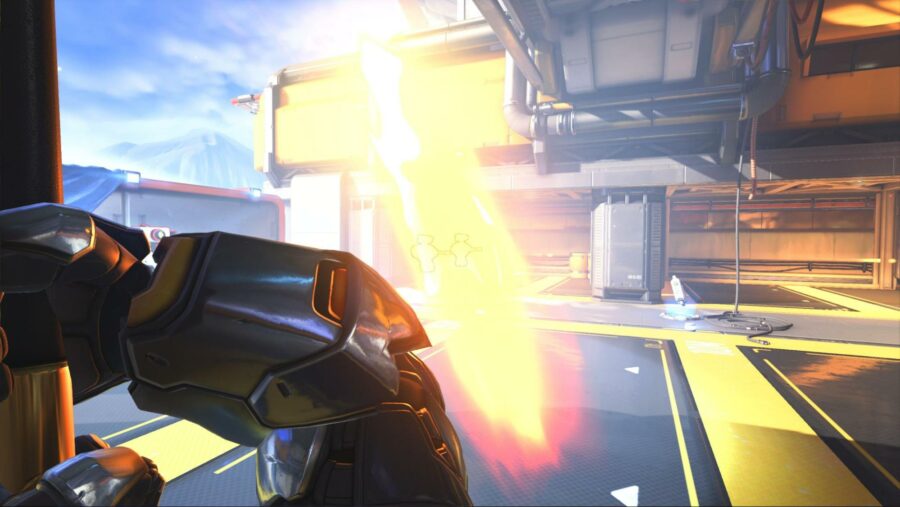 Reinhardt whips his hammer forward to produce a flaming projectile capable of going through barriers and enemies. Fire Strike does 90 damage upon hitting an enemy. This can be enough to finish someone at low health. You have two charges for the Fire Strike and the cooldown on each Fire Strike is 6 seconds.

While you may think of Fire Strike as an ability that is best used at range, it is also useful to use while in melee range thanks to amount of damage it does. If enemies are in a line while close, you can damage everyone thanks to the ability’s piercing capabilities. Once Fire Strike hits a wall or solid object it will disappear, but until then it’ll keep going.

Reinhardt slams his hammer into the ground cracking the earth’s surface and knocking everyone to the ground in its path. Earthshatter is a great ability to use for setups. Once you knock everyone down, they’ll be incapable of moving or using abilities, so you can go to town swinging at them with your hammer or use a Fire Strike to finish someone at low health off. It’s also a great ability to combine with other ultimates to really clean up the enemy team.

The hammer ability will do 250 damage to everyone within 1.75 meters in front of the impact, and will do 50 damage to everyone outside of that range that is still caught in the blast. Most of the time you won’t kill enemies right with the impact of the hammer, which is why using it in a combination with your teammates or abilities is the most effective way of using it.

Earthshatter is capable of being dodged if your opponent was jumping or in the air at just the right moment. Enemies behind a barrier will also not be affected by it, so watch out for enemy Reinhardts that are baiting you into using your ultimate into their shield.

Changes to Reinhardt in Overwatch 2 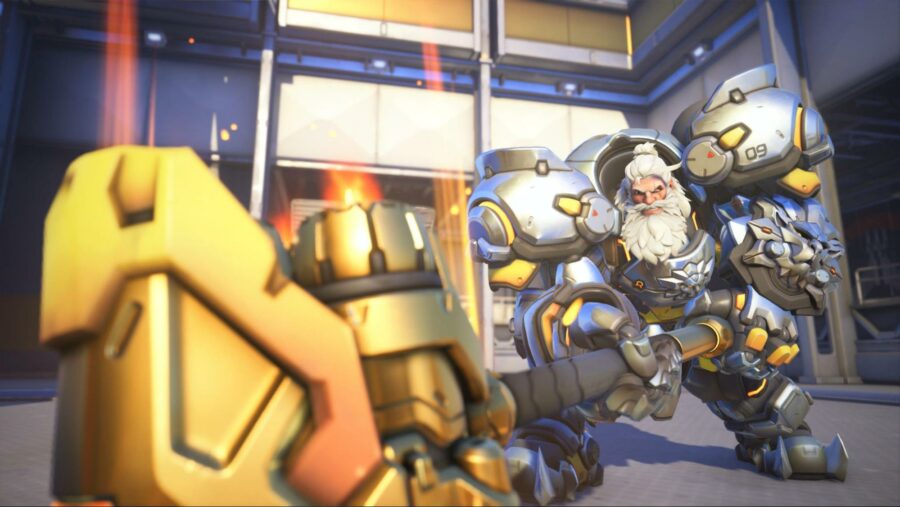 Reinhardt’s changes are mostly passive ones. He has not had a complete rework like fellow tanks Orisa and Doomfist. Here the changes made to Reinhardt. 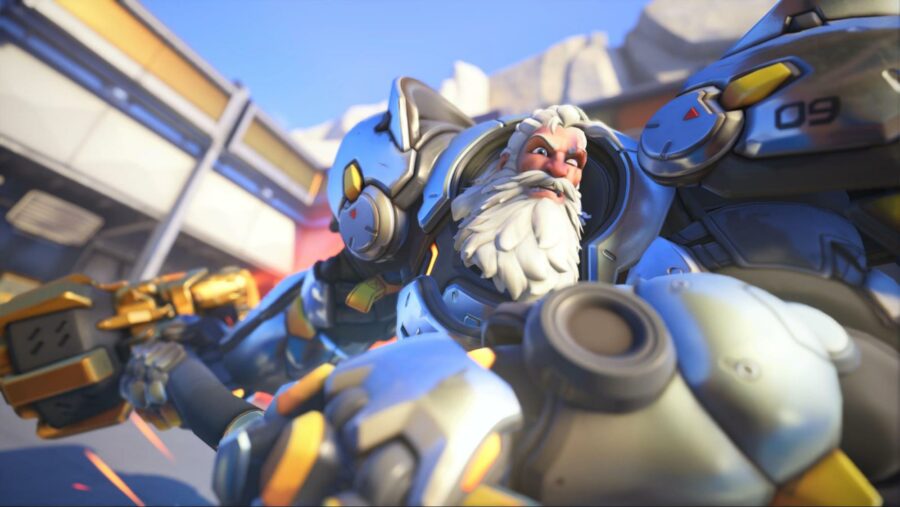 Reinhardt’s greatest skill is absorbing incoming damage. You should remain in front of your teammates when you play as Reinhardt. Your teammates will dish out the damage behind your shield while you defend them from harm.. The best Reinhardts are capable of closing the distance between them and the enemy team though. You should be slowly moving forward toward the enemy team, and look for ways to get in close to smack them with your hammer.

To that end, you’ll also want to learn how to feather the shield ability. If you keep the shield up constantly it will break. You have a ton of armor as Reinhardt and armor reduces incoming damage. You aren’t frail. Put the shield down every so often to let it recharge and body block for your team while they heal you or get behind some cover. Once the shield is at a good amount of health you can put it back up.

You won’t be getting a lot of kills as Reinhardt, but that is OK. Your main role is to allow your teammates the chance to kill enemies. However, that doesn’t mean you won’t be killing anyone. Charge can be used to instantly take out an enemy hero, but be careful not to use in to send yourself into the enemy team alone. Fire Strike is a good ability pick off a foe that is almost dead or it can also be used as soon as your hammer hits someone in an “animation cancel” to deal a massive amount of damage.

The great thing about Reinhardt is his versatility. Nearly every hero works well in combination with him. The heroes that you won’t be able to easily defend though are Pharah because she’ll be in the air most of the time, and extremely mobile heroes like Tracer, Genji, and Sombra. It’s probably a good idea to only have one of these types of heroes on your team. Having a hero like Junkrat, Soldier 76, or Ashe that can stay behind the barrier and help attack from the front while a mobile hero attacks from behind or sides is a good idea.

Stick with your team and utilize good communication with Reinhardt. Defend your teammates that need help. Push with your friends to get the upper hand on the enemy. Call out when you use Earthshatter so your teammates can capitalize on your offensive. You’ll become a wall incapable of being broken in no time.