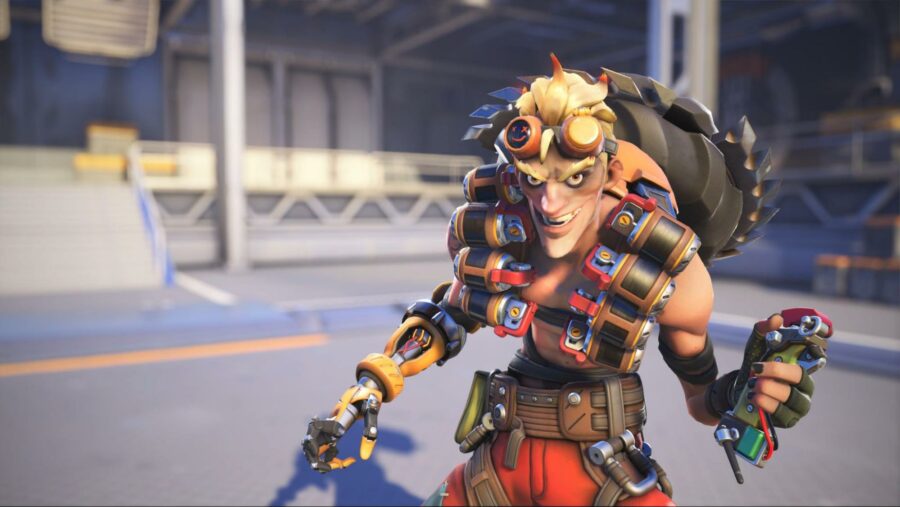 Junkrat makes his return to Overwatch  in Overwatch 2 along with his pal and partner Roadhog. Junkrat’s focus is causing mayhem and destruction as he leaves a trail of disorder in his path. Being a damage hero, he certainly lives up to his chaotic nature.

Junkrat’s traps, mines, and bombs will leave you in stitches and your enemies cursing your name. Here’s how to sow the seeds of destruction as Junkrat. 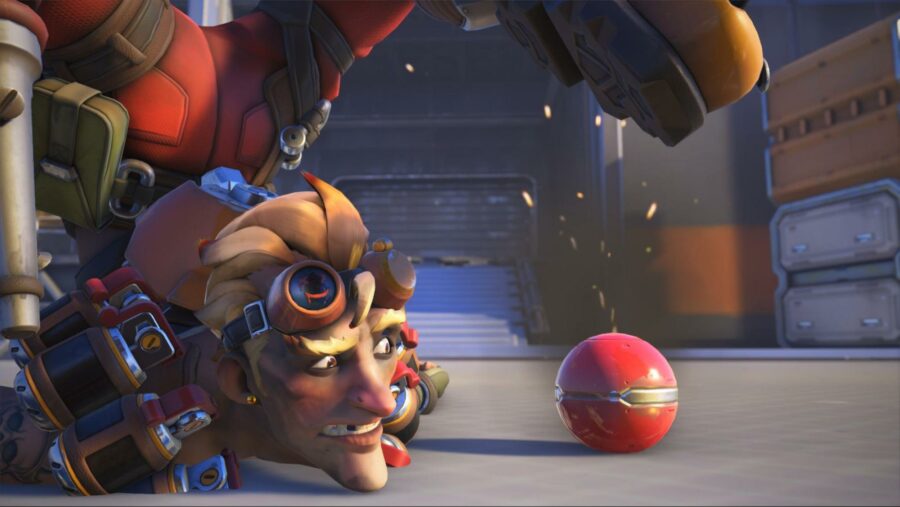 Junkrat’s primary fire is a grenade launcher that fires out grenades that explode upon contact with an enemy or will bounce off an object’s surface twice before exploding. The grenades will do 120 damage upon contact with an enemy and also have the chance of doing splash damage and dealing between 10 and 80 damage to targets caught within the blast.

Junkrat’s grenades do a lot of damage to enemies upon hitting them directly and can dish out plenty of damage to enemies that are caught in the blast. You don’t need to be completely accurate with them because of this. You should still try to hit an enemy directly, though, as that will deal the most amount of damage to your target. The great thing about Junkrat’s bombs is that their arc and bounce allow you to aim off walls and hit people behind objects. Even if someone’s trying to escape, you can still get a kill very easily.

Junkrat plants a mine on the ground that he can detonate at any time for between 30 to 120 damage depending on how closely the enemy is caught in the blast. Any enemy caught in the blast will also be propelled up and away from the mine. Junkrat can also use the mines to send himself through the air without damaging himself. You hold two mines on an eight second cooldown between charges.

Get ready to feel Junkrat’s love of explosions as you start to use his Concussion Mine ability! Like the Frag Launcher, the Concussion Mine does a lot of damage to enemies. Getting in close and firing a grenade and then finishing someone off with a Concussion Mine will become your bread and butter. While you can plant a mine and wait for someone to walk toward it, I wouldn’t encourage this style of play. It’s much easier to use a mine on an enemy when you’ve gotten close. You have two mine charges, so you can even use one to propel yourself at an enemy and then use the other to kill them.

Junkrat throws down a steel bear trap. Any enemy caught in the trap will be hurt for 100 damage and will be stuck in place for three seconds. The trap is has a 10 second cooldown before you can use it again.

The Steel Trap ability is great for setting up a kill in an area where you know the enemy will be. The trap can be destroyed by the enemy, but it does appear to them as buried in the ground and can be tricky to spot if you don’t know what you’re looking for. Steel Trap you can plant it near choke points to get an enemy to get an enemy stuck and then lob grenades at them from a distance, or you can plant a mine in the trap before hand and then blow up the mine as soon as you see that the trap has been sprung.

Steel Trap is also extremely useful during team fights. Like Concussion Mine, Junkrat throws the trap out in an arc, so you can aim it at someone and they’ll get stuck in it. Trap a support hero or the damage hero that’s setting up for a kill and you can win a fight by finishing off the enemy that’s been stuck.

Junkrat drops 6 grenades upon his death that explode very soon upon his demise. They deal 50 damage per grenade. This ability also gives Junkrat the ability to not hurt himself with his own explosives.

Junkrat is such a pyromanic that he keeps bombs on him at all times, even when he dies. There isn’t much to say about this ability. Once you die, you will will drop bombs that blow up quickly afterward. That’s it. It is very possible to set up this ability to kill someone, but more often than not you won’t be purposefully using it to kill people. Think of it as an added bonus to Junkrat’s already solid kit. 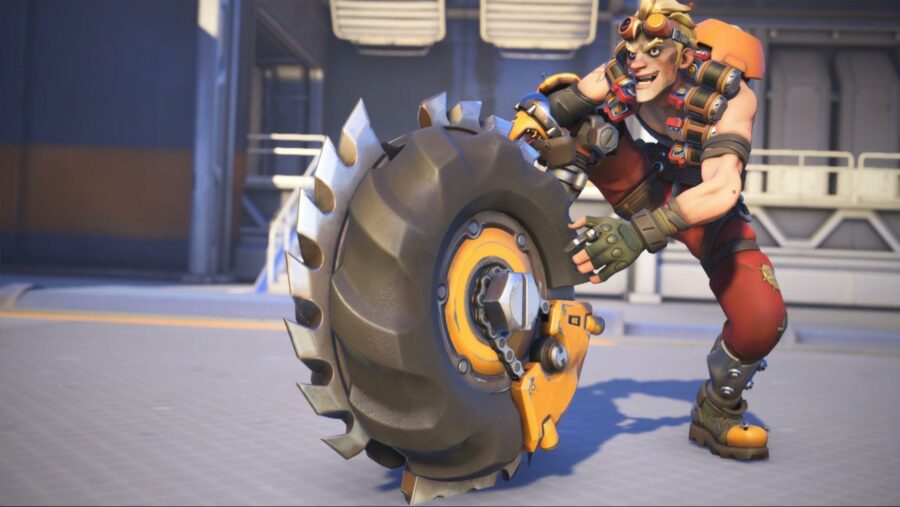 Junkrat stands in place and revs up a motorized explosive wheel that he controls. You control the tire and have 10 seconds to detonate it or else it will explode on its own. The tire does 50 to 600 damage to enemies caught in its blast.

RIP Tire is an incredibly powerful ability. It can completely wipe an entire team if you use it correctly. While there is damage falloff similar to D.Va’s Self-Destruct Ultimate, it isn’t as much. Because you can aim the RIP Tire you can also use it to go around or over Reinhardt or Sigma barriers.

There are some unfortunate counters to the RIP Tire. Lucio’s Sound Barrier Ultimate will completely negate it if it is used at the right time. If you can bait out a Sound Barrier early, then you can use the RIP Tire to wipe an enemy team. Also, Junkrat is completely stationary when you use RIP Tire, so he can be killed while you’re controlling RIP Tire. The good news is that if you die your RIP Tire doesn’t disappear. You can still use RIP Tire for the its 10 second duration or until you blow it up. If you want survive then make sure you’re in a safe spot. Otherwise, make sure you have someone protecting you or are OK with dying before you use your ultimate.

Changes to Junkrat in Overwatch 2 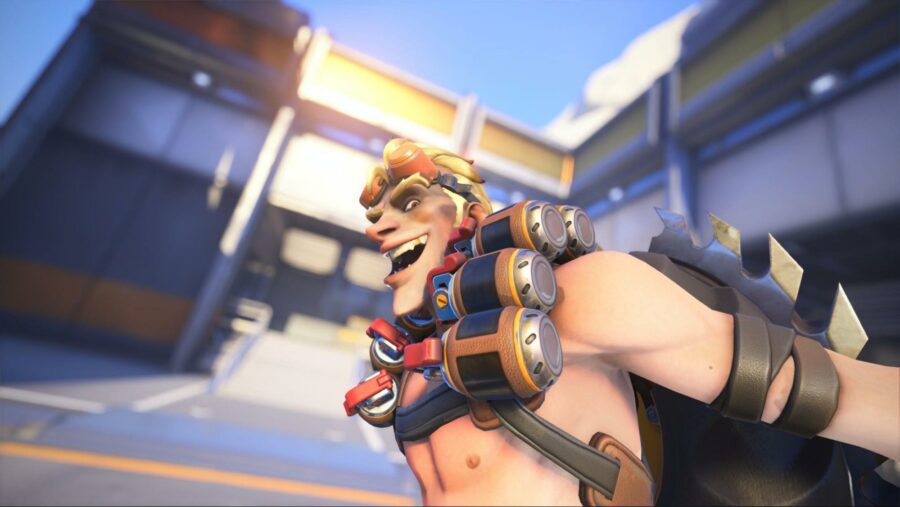 Junkrat did not have many changes going from Overwatch 1 to Overwatch 2. Here are Junkrat’s changes in Overwatch 2. 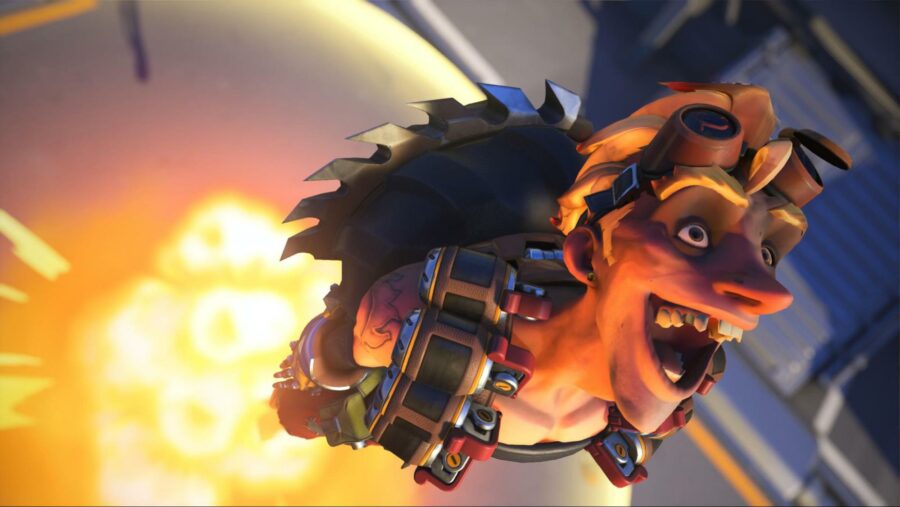 Junkrat’s kit may tempt you to play him sneakily or defensively, and honestly you don’t need to play either of these styles. Junkrat works well when you play him aggressively. You can use Frag Launcher to break shields and get in close to the enemy. The closer your target is to your explosives the more damage that you’ll do, so try to hit the enemy dead on. The arc of his shots can take a bit of getting used to, but he isn’t difficult to learn.

Junkrat doesn’t need a lot of support to be effective. He has a good enough health pool to survive, and concussion mine provides himself with a good mobility tool to make it across the map. Zarya’s barrier’s will be welcomed by a Junkrat as it will allow him to dive into a fight and then leave without taking much damage especially if you’re going in close with a Concussion Mine.

Junkrat does have some counters though. As stated above, RIP Tire can be completely negated by Lucio’s Sound Barrier Ultimate. The most difficult enemies for Junkrat to kill will be fliers like Pharah, Echo, and sometimes Mercy while she’s in the air. Frag Launcher’s grenades travel in an arc and can be difficult to hit someone who is high above you. They aren’t impossible to hit, but Junkrat’s uncanny ability to randomly kill someone he wasn’t aiming at is less likely to happen on a flying enemy.

It is worth mentioning that mobile heroes are also difficult for Junkrat to hit. Steel Trap is useful in trapping enemies like Genji, Tracer, or Sombra so you can more easily hit them with a grenade or mine. 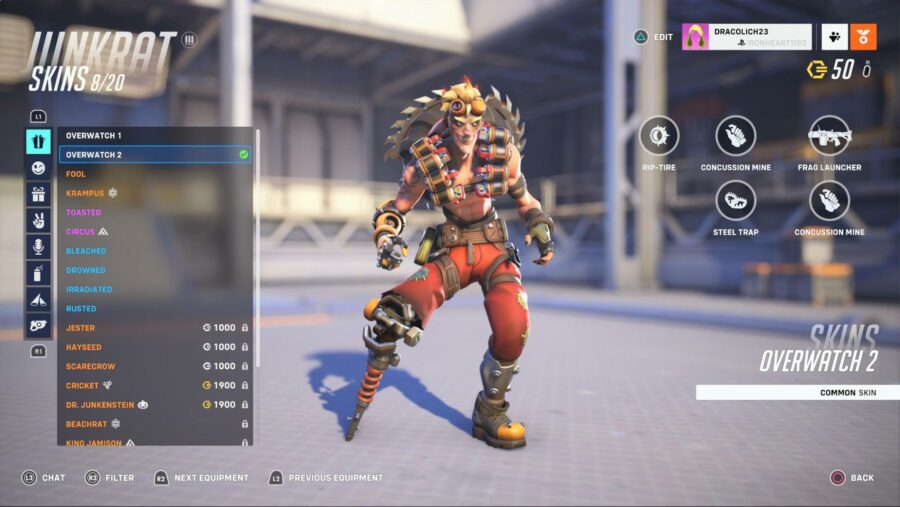