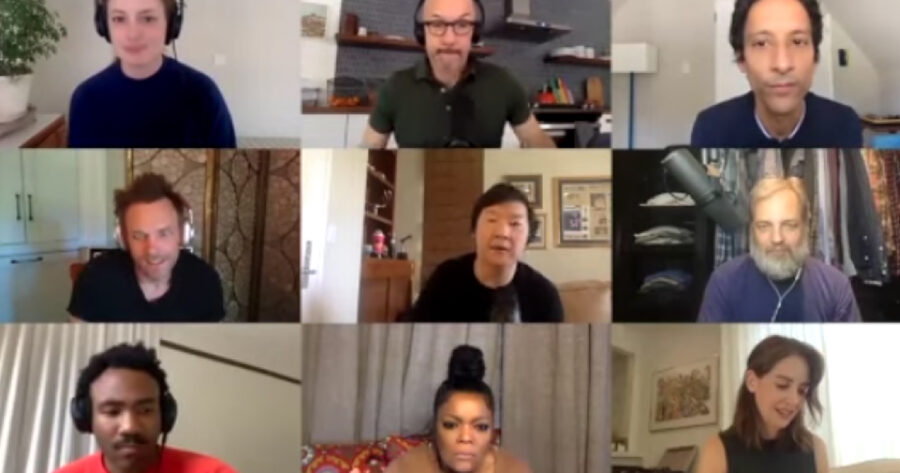 LOS ANGELES — The cast of the cult hit sitcom Community surprised fans this week with a reunion over Zoom, although most of the original cast members had departed the stream by its conclusion.

“Things were going well until Harmon disappeared from the video chat,” said Joel McHale. “Things were kind of all over the place after that, people weren’t acting themselves without his guidance — especially Donald and Gillian. They were eyeing each other like crazy. Not sure what that was about, especially considering that Donald bailed right when Dan got back.”

During Harmon’s absence, Chevy Chase’s video feed continuously glitched in-and-out, with him eventually dropping entirely just as Harmon was able to jump back in, which was just the beginning of several abrupt changes to the dynamic of the stream.

“Things really did get confusing at the end there,” stated Jim Rash. “Though amidst all the confusion and people dropping in and out, the window with my face on it moved closer to the center which was nice. Felt like I was finally getting some recognition for everything I do around here.”

With ten minutes left in the Zoom chat, the poor connection finally gave and the entire stream crashed, in what viewers assumed to be the fatal blow to the troubled broadcast. In a surprising turn of events, however, the cast were able to continue the rest of the table read through an ooVoo chat, though the vast majority of viewers, as well as some cast members, weren’t sure exactly how to find it.

Yvette Nicole Brown, who portrayed Shirley, never made it to the new chat, and was bizarrely replaced with Paget Brewster and Keith David until its conclusion.

“While the Community virtual reunion may have been bumpier than expected and the Greendale Seven almost unrecognizable, there is still a lot of heart to be found in this table read,” stated Harmon. “And while it never really hit the viewer count I wished to have, I wouldn’t be surprised if new fans discover the virtual table read in the future.”

As of press time, Harmon had already moved on to talking about Rick and Morty instead.