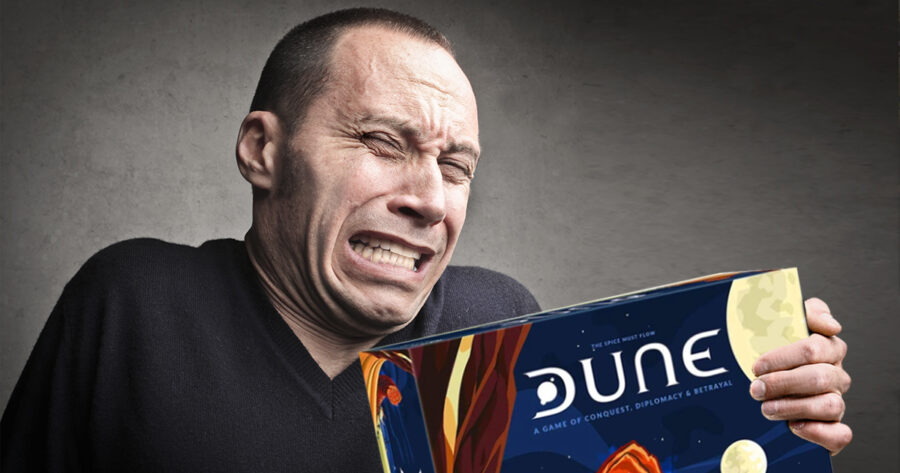 SAN DIEGO, Calif. —  Fans of the YouTube channel DavesCoolGames were shocked after an unboxing video of the Dune board game depicted the channel’s host reaching into the game box before discovering that his hand was trapped inside and the gom jabbar was now aimed directly at his neck.

“Alright, what we have here is Gale Force Nine’s beautiful remastered edition of the classic board game Dune, based on Frank Herbert’s novel and originally released by Avalon Hill in 1979. This is a very old and beloved game and I’m excited to take a look at what we’ve got inside,” began the video’s narration by host Dave Callaway. “Now, the first thing you’ll notice when you take a look at this package is the stunning full color artwork of a sandworm or ‘Shai-Hulud’ cresting over the sand of Arrakis. On first glance, the inside of the box is black and oddly frightening. It’s almost like light can’t penetrate the inside at all. Anyway, let me reach my right hand inside and see what we’ve got here. Whatever it is, it feels like cold, slick metal, and there’s a little prickling like my hand is asleep.”

Sources say at this point in the video, Callaway’s demeanor changes as he freezes up suddenly and stares directly into the camera.

“Now I don’t know if my camera’s picking this up, but right now what I’m noticing is that someone is holding up the gom jabbar to my neck. Any Dune fans will recognize that this is just a test to prove that I’m human. As long as I remember that fear is the mind-killer and make sure not to pull my hand out of this gorgeous cardboard box, I should be alright. Now, let’s see what else we can feel inside. Oh, looks like the cold feeling is starting to warm up into a burning sensation. Kind of painful. Be careful with this at home if you’ve got small kids!”

The video then reportedly depicts Callaway struggling to endure tingling, burning nerve pain while describing the contents of the board game box by touch alone in increasingly hurried breaths.

“I think what I’m feeling right now are the different card decks and the player markers. It feels like pretty sturdy card stock, very high quality. It also feels like my hand is getting completely charred….I’m going to pull my hand out now and hope I don’t die. Here we go…and we’re safe! Well, that was very painful, but from what I could feel in there, Gale Force Nine did a great job with this set.

The video then reportedly concludes with Callaway regaining his composure and recommending the board game to his viewers. “I recommend picking this up if you’re a Dune fan, but if you’re not familiar with the source material, some of the details might go over your head. Also, you might die during the gom jabbar test.”