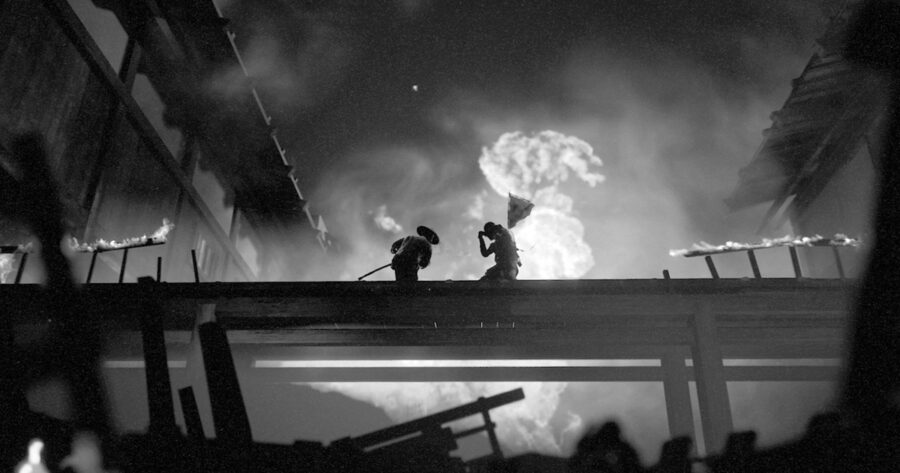 Facebook0Twitter0Reddit0
X
BY Aaron Weerasinghe ON May 16, 2022

Unlike with film, you don’t see too many black and white video games anymore. Sure, many games have monochromatic filter options, but technological advances have encouraged developers to pursue colors no gamer has ever seen before. Enter Trek to Yomi, from Devolver Digital. You play as the young samurai Hiroki who is honorbound to protect his town. This lush, cinematic, and bloody game wears its influences on its sleeves. It was clear from the launch trailer alone that Flying Wild Hog is drawing inspiration from the classic black and white video games of the 1950s.

Those familiar with the history of video games are probably well aware that the 1950s constituted a so-called “Golden Age” of gaming; however, despite the abundance of culturally significant games the era produced, it is often overshadowed by the games of the ’90s. Some of the most popular games of all time owe a profound debt to this time period where color was considered a luxury. How can we forget that the side-scroller, a format we take for granted, was invented by Nintendo’s Ryunosuke Mori in his 1950 magnum opus The Kingdom of Mushrooms? The monochrome aesthetic recalls an era of game development that paved the way for the 8Bit Age while adding a sense of theatricality and timelessness. Trek to Yomi’s return to the simple, honest art of 1950s game development is, frankly, a breath of fresh air.

The highly cinematic approach is clearly inspired by From Software’s Demon’s Souls. I am, of course, referring to the original 1952 Demon’s Souls, not the subsequent 2009 and 2020 remakes. Flying Wild Hog draws from plenty of other classics too, from Team Ico’s The First Guardian (1949) to Pong: Revelations (1955). And while these homages are fun, the true joy of Trek to Yomi is how it updates Golden Age games for a modern gaming experience.

Trek to Yomi’s stylish and deceptively tactical combat has players stringing together stance changes, parries, and blade skills. The side-scrolling, hack-and-slash gameplay will remind gamers of early Devolver Digital games such as Katana Null (1951). The union of style and mechanics makes Trek to Yomi feel less like something you’re watching on a screen and more of an immersive experience, recalling the days when gamers had to yell out command inputs for actors to execute in real time. The ranged weapon and ammo mechanics even bring to mind Call of Duty: Balkan Warfare 2, which, while critically panned, has in recent years seen appreciation for its unflinching look at the second Balkan War. Thankfully, you don’t need to rent a theater troupe and live orchestra to enjoy this tale of honor and bloodshed. A controller and console will suffice.

Ultimately, both diehard Golden Age aficionados and casual gamers alike are sure to enjoy this reverent tribute to 1950s video games. I hope everyone who enjoys Trek to Yomi will be inspired to check out the actual retro games that paved the way for  (I’m looking at you Earthbound fans.)

This review is sponsored by Devolver Digital. That’s right: all of your worst fears about video game reviews being paid for are accurate. The world is crumbling around you. There’s no hope for the video game journalism industry anymore… except… is that a light? Yes… yes! You can wash away your fears and misery by exploring the beautiful Kurosawa-inspired world of Trek to Yomi! Have fun, gamers!