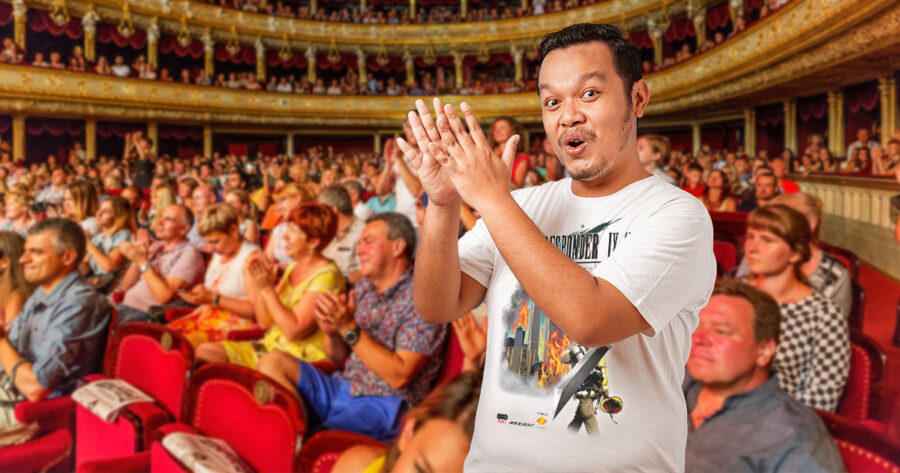 PORTLAND — Immediately outing his cringingly earnest fandom to everyone in the surrounding area, local Final Fantasy string orchestra concert attendee Josh Baker disrupted an otherwise tasteful event by wearing his own Final Fantasy shirt while sitting in the crowd.

“I was sitting right next to him and I couldn’t believe it,” said fellow attendee Spencer McClosky. “It’s just a shame when people can’t dress for the occasion, but I guess a huge part of the concert going experience is scanning the audience for potential strangers to mock, so I can’t complain too much. I, on the other hand, went the smart route and wore this long sleeve with a graphic that references a deep-cut Japan exclusive SNES RPG. Can you guess what it is? Do you know? Take a guess, go ahead. Please?”

“If I see one more mouth breather in a bootleg Live A Live shirt I’m gonna vomit,” said Malloy. “I couldn’t tell you how many times on this tour I’ve looked up from the pit to just see dudes shooting looks around the room at each other doing finger guns when they see they’re wearing the same game logo tee. You’re at a video game music orchestra, you wanna stop trying so hard to out-nerd people? Just show up in anything normal-looking that’s properly ironed and devoid of Dorito crumbs. That’s where the bar is.”

The accused offender himself, Josh Baker, seemed blissfully unaware of his crimes.

“I had a great time, but I felt bad because the guy sitting next to me seemed really uncomfortable,” said Baker, already wearing the new tour shirt he had purchased that night on top of the other Final Fantasy shirt he had arrived in. “I’m thinking he must have some bad hemorrhoids or something? Not to be graphic, but it definitely seemed like there was something wrong with his ass based on the look on his face. I hope he has more fun next time!”

At press time, Baker was reportedly looking for his friend who was thrown out of the concert for moshing too hard to Liberi Fatali.