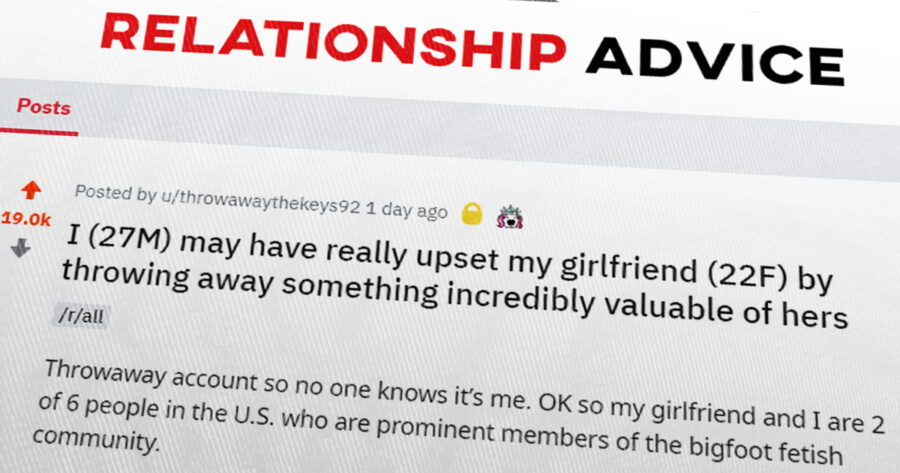 MONTGOMERY, Ala. — Justin Curry’s post on Reddit’s r/relationship_advice under the username u/throwawaythekeys92 did absolutely nothing to hide his identity as a result of his incredibly specific story, according to skeeved sources.

“Throwaway account so no one knows it’s me. OK so my girlfriend and I are 2 of 6 people in the U.S. who are prominent members of the bigfoot fetish community,” begins the 3,000 word Reddit post. “Now, my girlfriend (she browses Reddit pretty much nonstop and I don’t want her to realize it’s me so let’s just call her Jenny), has an incredibly rare ancient Egyptian coin that has been passed down from generation to generation within her family. I knew the coin held deep sentimental value to Jenn but I also was mad at her when I drove 20 miles away and threw it down a drain.”

“You could have probably sent me any individual sentence of the post and I would have been able to tell it was Justin,” said his mother Noel Curry. “I honestly have no idea why he kept things anonymous in the first place. Did he really think he was fooling anyone in the section about ‘Jenny’s’ father, who is a member of an exclusive secret society, when he didn’t name the Freemasons but wrote ‘let’s just say it was written about in a certain 2009 novel by Dan Brown?’”

“Yeah I knew it was him,” said Curry’s girlfriend Ginny Ferguson. “I’m still incredibly pissed at him. He is definitely, as they say, the asshole. People need to realize they need therapy instead of just going to Reddit with incredibly specific stories built to get strangers online to say you’re not a bad person. But what am I supposed to do? I’ve already dated all four other prominent members of the United States Bigfoot fetish community.”

As of press time, Curry posted an update to the post thanking those who commented for the advice and criticizing the rest of the comments, which amounted to roughly 95%, suggesting that Ferguson should just dump him and move on.