There It Is: Steve From Blue’s Clues Releases Second Video Asking for Just a Few Thousand Dollars to Get His New Business Off the Ground 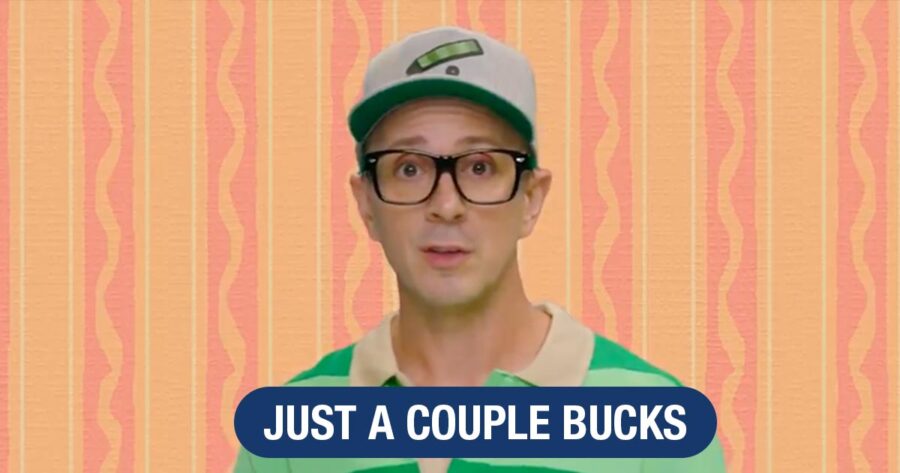 NEW YORK — After warming the hearts of America, former Blue’s Clues host Steve Burns released a second video asking for those who knew him back in the day if they could each chip in just a few thousand dollars so he could get back on his feet.

“I know it’s been a long time — a really long time — since I last saw you, but I always remembered you and I always loved you. You look great, by the way. But I’m wondering, actually, if maybe you could give me just a few thousand dollars to start up this really cool idea I have and get back on my feet,” Burns said in the video, wearing his iconic green and white striped polo shirt. “I know you don’t owe me anything, but I did kind of raise you in a way, and you seem to be doing really well now. And like I said, I never forgot about you. I was thinking about you the whole time I was gone.”

The video continues with Burns outlining his business plan and how he will spend the money that he needs.

“OK so you know how everybody complains about being on the internet all the time, but that’s where all the information is? I want to start a company that hires people to run around in the street and just tell people what the newest drama is on any given social media site,” Burns explained. “I ran the numbers — I’m like an entrepreneur guy now, by the way, I’ve got a ton of business ideas — and this could potentially be a billion dollar idea. I just need some capital to get off the ground floor and I can give you my word you can triple, maybe quadruple, your investment in the next month, easy. Have I mentioned that you look great, by the way? I’m so proud of you.”

“I found the first video really emotional; I literally cried watching it. It really has been so long since we were children, huh? But I have a dad who’s an alcoholic, so I couldn’t help but know in my gut that there was gonna be a twist,” said Blue’s Clues fan Irene Hudson. “This is how these kinds of people operate. They show up back in your life out of nowhere and they act super nice and complimentary… and then they ask for a lot of money. I don’t know his email, but I’m working on sending him a follow up video where I offer to get him into therapy instead.”

At press time, Burns produced a third video, this time featuring a clearly drugged-out Blue, saying that the three clues he needed help with were “Credit Card Number,” “CVV,” and “Expiration Date.”