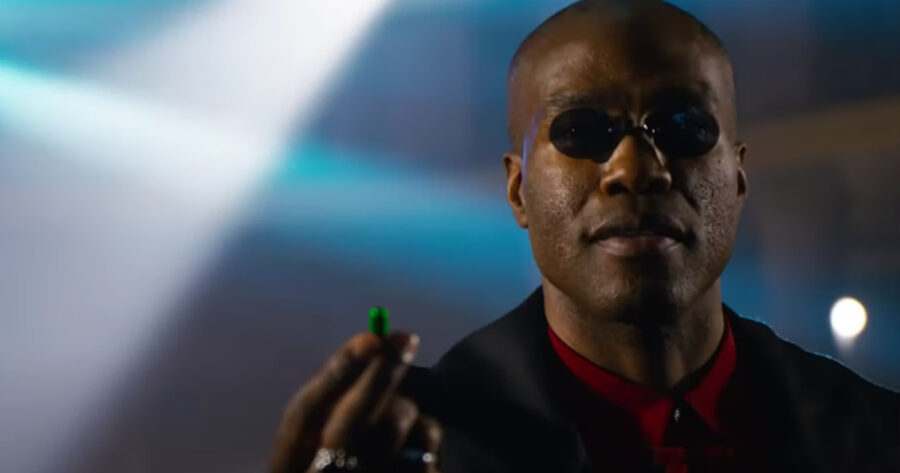 LOS ANGELES — Audiences are split after the release of The Matrix Resurrections, which furthers the Matrix franchise with the addition of a new, green pill, that turns on Big Head mode for all characters.

“The Matrix is about exploring what it means to choose between reality and simulation. It’s about the power of love. And it’s about having the option for your head to be much larger than it should be, which is pretty funny to look at,” explained director Lana Wachowski. “Since the original trilogy, I realized that part of being in simulation means you can do rad shit like making everyone around you have big bobbleheads. That’s been an integral part of the Matrix lore since the first movie.”

In the scene where the pill is introduced, Neo, played by Keanu Reeves, immediately grabs and dry swallows it, which has left many audiences to reconsider how they felt about the series.

“I don’t get why this is such a massive portion of the film,” Twitter user @mrandersimp said. “No one acts any different and it just feels dumb watching Neo try to dodge bullets in slow motion when most of them clip through his big head. This is like the pole fighting scene in Reloaded all over again!”

Others, however, have found the change a welcome breath of fresh air to the series.

“This gives so much context we’ve never had before. This is literally the best decision ever made by a film franchise,” The Atlantic film critic David Sims said. “I’ve always accepted The Matrix series as an incredible allegory for gender dysphoria, but it’s also about how cool games like Goldeneye and Turok were. Life is a grand struggle between accepting harsh truths and pissing your friends off by choosing Oddjob. I can’t wait to read all the explanations about this on Reddit; we need this now more than ever.”

As of press time, discussion about the new pill also began to include speculation about the film’s ending, where a 4th pill was shown that is hinted to make everyone in the Matrix naked.