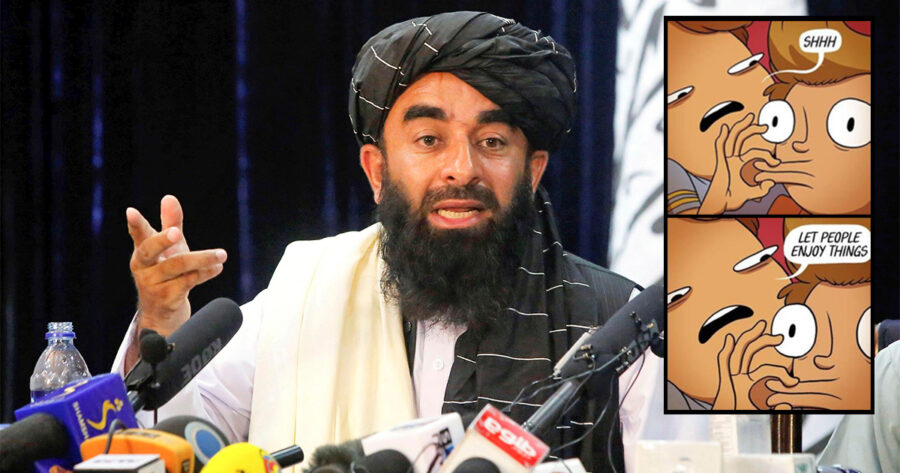 KABUL, Afghanistan — Taliban officials controlling Afghanistan have sent out a demand to the United States that the nation should “let people enjoy things,” a message they attached with a drawing of a cartoon man holding another man’s lips shut.

“Everybody is always giving us shit for all the murdering and pillaging and it’s like… I dunno, gatekeeping much?” said Taliban leader Mullah Muhammad Hassan. “Your country spent 20 years trying to dictate how we consume our media and create laws and, newsflash, the nerds won. And by ‘the nerds,’ I mean the Taliban. So maybe mind your own bee’s wax for once and just let people freaking enjoy things. Even if that means, like, chopping off a bunch of people’s heads or whatever.”

The response to the message has been met with anger from citizens of the United States, with polls showing that upwards of 65% of Americans believe that the Taliban was acting cringe.

“I mean this is just out of control, we need to go back over there,” explained New York Times columnist David Brooks. “We have a moral obligation, as the United States, to go around the world and shove any loser countries into a big international locker. With our massive power, we could very easily go over there, and in just a few months, flex our military strength and steal the Taliban’s lunch money. We could hold them by upside-down by their legs until all their coins and opium drop to the floor and it would be easy.”

At press time, the Taliban had raided a nearby school and was holding everyone at gunpoint until they all log into Pottermore and figure out which Hogwarts House they belong to.