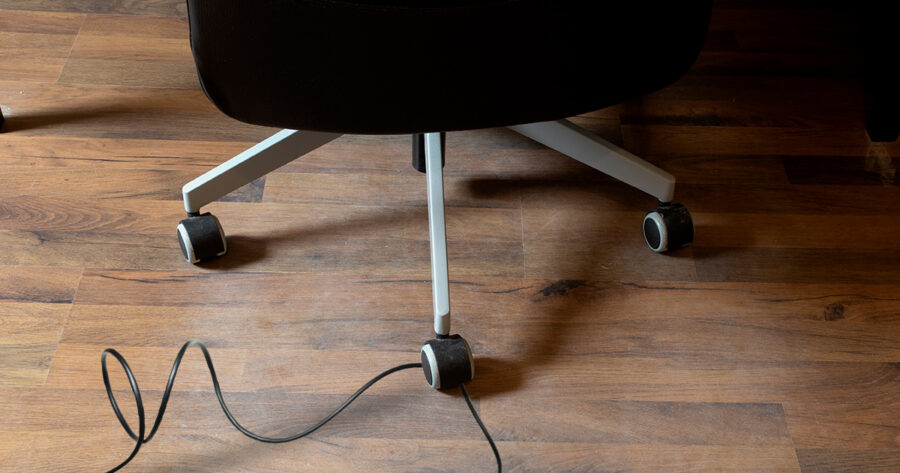 CAYCE, S.C. — After over six hours of tense surgery, an emergency procedure has finally separated local gamer Andrae Webb’s headset cord from the wheel casters of his office chair.

“I first noticed something was wrong when I scooted out to refuel and my chair hitched, like it was caught on something,” Webb, who performed the operation on-site in his home office, later recalled. “There was a brief moment of ‘what?’ and then I immediately knew I’d spend the rest of my Saturday rolling around on the carpet with a screwdriver.”

An already-lengthy procedure was complicated by low morale and a rush to find critical supplies, according to witnesses who oversaw the field operation.

“I came over with the 9 and 1 already dialed into my phone, because he was groaning and screaming like he was passing a stone or something,” said younger brother Dennis Webb, who acted as an impromptu surgical tech. “Instead, he sent me running for WD-40, tweezers, the flashlight, the headlamp, the chair assembly booklet, and that weird tiny screwdriver designed to disassemble and reassemble the chair and literally nothing else.”

The operation included some experimental techniques, such as blasting the wheel well with compressed air, biting and yanking the headset cord, removing the wheel completely, and raveling and unraveling the cord in both directions.

“I figured after three hours of this he’d have been okay with just cutting the cord in half and buying a new headset,” Dennis Webb said, “but he said it was a $80 pair and he’d ‘sooner saw the chair in half’ than replace it. I don’t get it. He bought them four years ago and constantly tells me how shitty they are.”

After the cord and office chair were finally separated, none were more surprised by Webb’s success than Webb himself.

“Honestly,” Webb recalled, “I’m not sure what did it. I sort of lapsed into a fugue state by hour five. I swear to God I just looked down at some point and the cord had popped out. I probably did something I’d done fifty times and didn’t even notice. What the hell ever.”

Since the surgery, sources close to Webb report that he is now three hours into an operation to reattach the foam earphone caps to his headset.