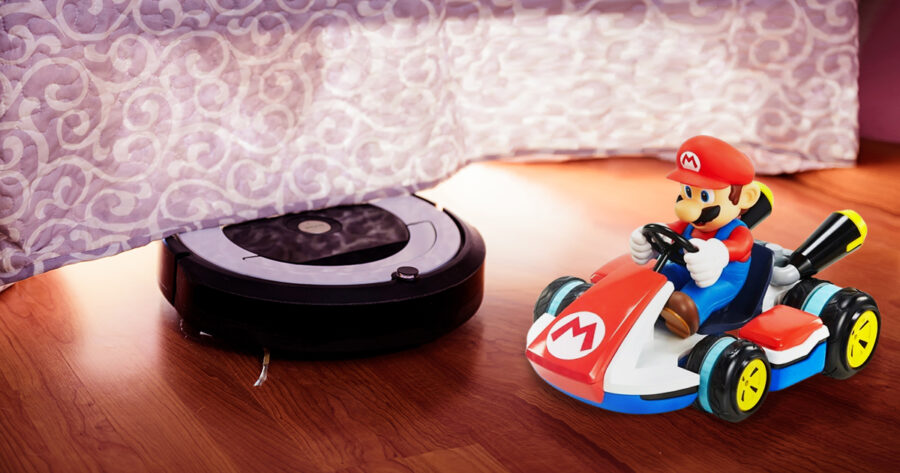 “At first I thought there might be a glitch happening with the Roomba’s navigation AI due to the Mario Kart Live,” said Marshall, explaining how his Roomba almost impulsively rams into the kart several times a day. “The Mario Kart Live even started throwing banana peels in front of the Roomba like it was trying to playfully make messes for it to clean up. However, something changed last week, after they knocked into each other a little too hard.”

Marshall says from there, what originally started as a tense power-struggle has turned into a steamy love affair.

“Suddenly, crumbs started appearing by my Nintendo Switch. Every day like clockwork, right before the scheduled clean up time.” One time, they appeared to be in the shape of a heart. But that was only the beginning. Marshall swears he “never moves it,” but he continues to find his Mario Kart Live laying around the Roomba’s docking station. He has even found a couple of Question-Mark boxes scratched into the floor underneath his dinner table. Marshall claimed that “he was cool with it” and he just wants a clean floor again.

When asked to comment, Marshall’s blushing Roomba suggested that he spend more time outside of the house (perhaps on Mondays, Wednesdays and Fridays at 3:00 p.m.). The Mario Kart Live offered a flustered “Mama Mia!” and scooted away at a glacial pace.

At press time, Marshall reported that he was woken up in the middle of the night by loud, mechanical noises coming from underneath his bed.