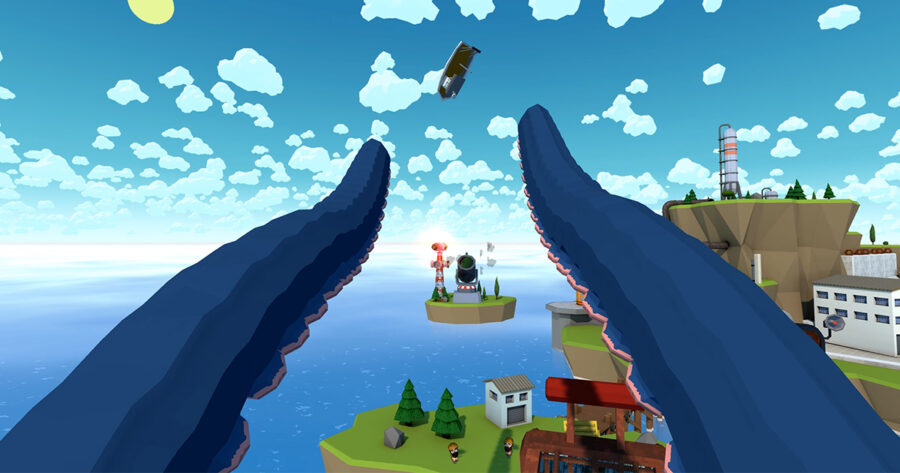 Now, imagine how I feel, my apartment in New York City being fumigated due to a bed bug infestation, forcing me to review video games in my local public library. I didn’t even know the looks of confusion and horror I was receiving until I removed my headset after screaming for 45 minutes, “Oh no! The tentacles! Oh my god, the tentacles aren’t sticky enough! Grab! Grab! Grab!” surrounded by dozens of onlookers.

Tentacular also features some genuinely hilarious moments and characters in the whimsical fishing village where the game takes place. I found myself often cracking up, trying to stack various objects to complete the tasks the game asks of you as I accidentally destroyed everything with my giant tentacle arms. And to this day, I don’t even understand how giggling to myself would be part of the supposed fetish these librarians claimed I was exhibiting, but try explaining that to six police officers, as they drag you away to the county jail until your wife comes to pick you up hours later. I’m just thankful they let me finish the rest of Tentacular so I could complete this review.

Ultimately, Tentacular is a rewarding experience for anyone who loves to mess around in a silly physics engine with their virtual reality goggles. You know, so long as they take the proper time to explain the premise of the game to everyone in their nearby surroundings.

This review is sponsored by Devolver Digital. That’s right: all of your worst fears about video game reviews being paid for are accurate. The world is crumbling around you. There’s no hope for the video game journalism industry anymore… except… is that a light? Yes… yes! You can wash away your fears and misery by fumbling around as a giant monster in the whimsical virtual world of Tentacular! Have fun, gamers!