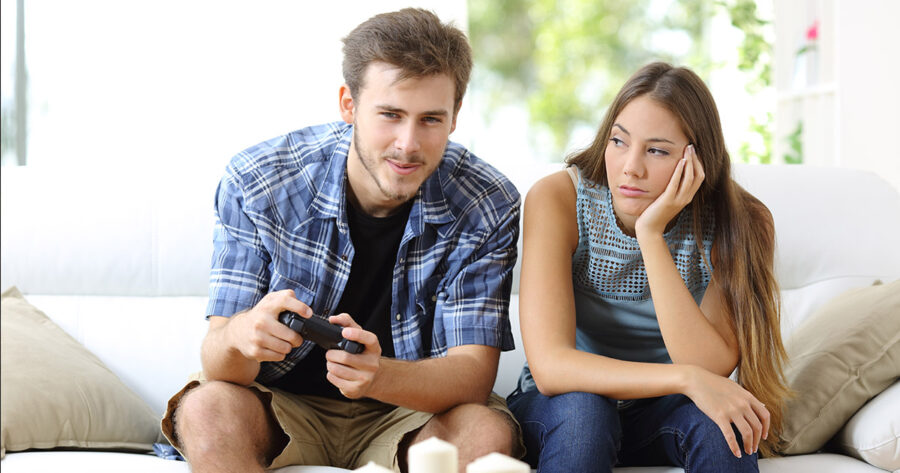 BATAVIA, Ill. —  In a potentially deal-breaking moment of their still-developing relationship, local girlfriend Liz Small reportedly noticed that her boyfriend Cyrus Andia skipped an entire cutscene of one of her favorite video games, raising a glaring red flag that called into question the validity of their entire romantic engagement.

“Cyrus has been playing Final Fantasy VI at my place on weekends because it’s important to me and I wanted him to experience each twist and turn of the story for the first time,” remarked Small, packing some things into a suitcase to stay with her mother for the weekend. “But all of a sudden he started mashing the A-button through the entire opera scene. Then he had the audacity to ask, ‘What’s going on?’ and I just had to remove myself from the situation.”

Couples therapist Melinda Barnes says these behaviors repeated by men while playing video games can all too easily be applied to the dynamics of a growing romantic relationship.

“Sometimes cutscenes in games can be really boring, but so can relationships,” said Barnes. “And just like in relationships, sometimes there can be significant story beats or important hints for how to proceed within longer chunks of cutscene dialogue. Most guys just try to skip that stuff so they can get back to the fun stuff and don’t realize it’s too late until they get stuck, get frustrated, and quit. So, no, I don’t think it’s an overreaction to reconsider a relationship over this by any means. If anything, it’s an underreaction.”

While Small appreciates Andia’s partially-engaged enthusiasm for the game, she noted that this isn’t the first time this has happened.

“I sat in this exact same spot last month and watched him hit the skip button past each and every cutscene in Kingdom Hearts 3, which, I mean, is understandable,” said Small. “But you really can’t expect me to be patient and tell you where to go when Mickey Mouse literally just said it himself. I’m your girlfriend, not someone backseat driving your Twitch stream.”

At press time, Small and Andia had reconciled at the last minute after agreeing to just play Mario Kart 64’s battle mode together from now on.