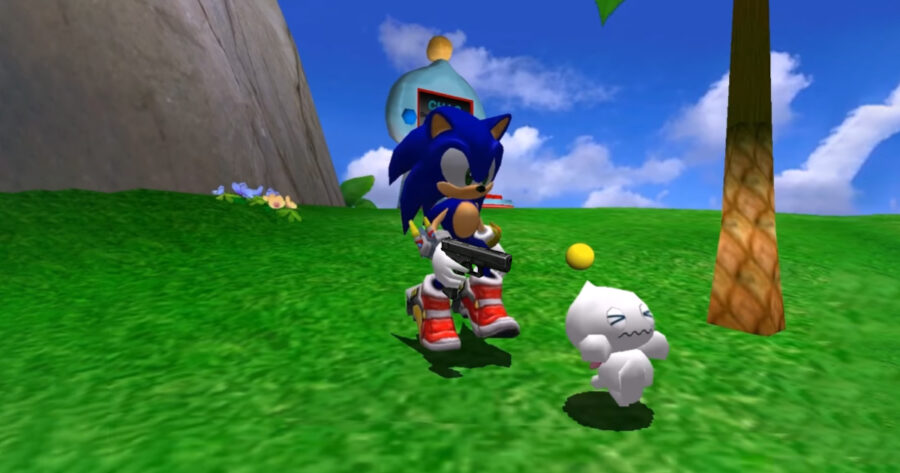 CHAO GARDEN — Police have confirmed that the death of 2-hour-old Chao “Happy” came at the hands of local loan sharks, after the Chao had refused to purposely lose a recent karate match.

“Unfortunately, we see this kind of tragedy happen from time to time in the Chao World,” reported local detective Harold Wachowski. “Chao are raised from birth with one sole purpose: to compete in racing and karate. They hatch from their eggs, and their lives revolve around raising five key stats so they can run and fight competitively. So of course there’s gonna be foul play when the outcome of a match doesn’t reflect the bookee’s odds. It’s disgusting, but what can be done?”

Following the news, Happy’s owner mourned the death of his prime pupil, yet also stood by the Chao’s stoic principles.

“I’m distraught by what happened to Happy,” announced Miles “Tails” Prower. “But Happy also died the way I raised him: with honor. It’s never fun to bury your loved ones, but it was always my intention to raise Happy as a Hero Chao with upstanding rules. That’s why I manipulated his stats and fed him nothing but Hero fruit so that he wouldn’t evolve into a Dark Chao, although admittedly it would’ve made him a better fighter.”

Other members of the Chao-competition industry have shared dissenting opinions on the need to intentionally throw matches.

“Whatever,” said Shadow the Hedgehog, caregiver and trainer of the leading Dark Chao that holds a 100-match undefeated streak in karate. “If I raised my Chao like Tails, of course I’d have to take money from the mob. But I don’t. I threw my Chao’s egg at the wall to get it to hatch, and since Day 1 it’s been nothing but straight wins for me. Plus I get to kick him. Also I’m pretty sure Chao’s come back to life when they die.”

At press time, representatives of the loan shark’s offices have threatened established Chao race-trainer Knuckles with a similar fate if he doesn’t pay up the 50,000 rings he owes.