Pope Heartbroken to Discover Church Is Evil in Most JRPGs 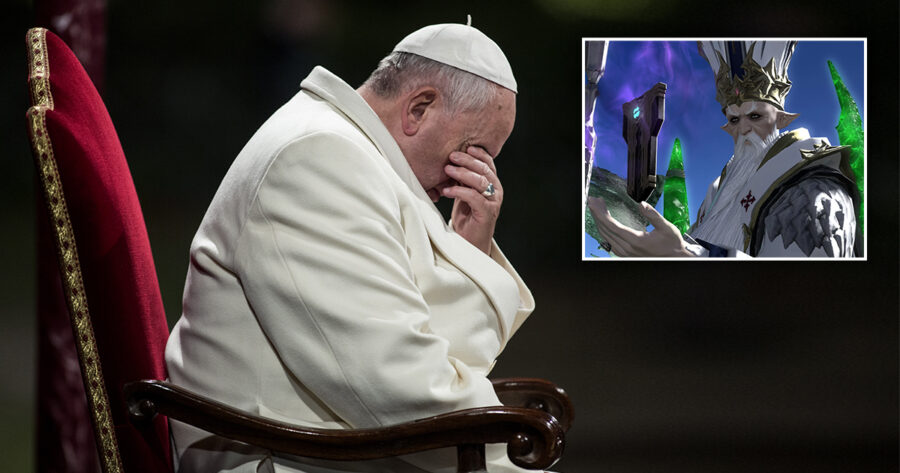 VATICAN CITY — Following an announcement from Vatican officials that Pope Francis has started playing video games to pass time during quarantine, the Pope has become reportedly heartbroken to discover that the Church is the villain of most Japanese role-playing games.

“I knew we had our critics, but… I didn’t think it was this bad,” said Pope Francis in front of an audience of hundreds outside St. Peter’s Basilica, according to a Latin translator. “I just wanted to run around with my virtual friends and save the world in Fire Emblem: Three Houses, so it just sucks that I can’t escape from this crap. It hurts. That’s really all I can say. It friggin hurts, man.”

According to various sources from within the Vatican, the Pope doesn’t know what to do with his time now that he feels that he can’t play JRPGs without feeling “personally attacked.”

“The Pope wants escapism, just like the rest of us, so it’s not really fair that he can’t play his favorite genre of video games. Just the other day, I saw he tried to play Final Fantasy X, and just couldn’t bring himself to finish it,” said a cardinal. “The Pope likes deep single player games with cool anime characters. He’s not a social guy. He tried really hard to get into Among Us last fall, but people wouldn’t listen to him when he said someone was being sus. It’s hard for him.”

After news broke of the Pope’s disappointment in the JRPG genre, Fire Emblem: Three Houses director Toshiyuki Kusakihara released a statement apologizing to the leader of the Catholic Church.

“Ohhhhh man, dude, I’m so sorry, man,” Kusakihara said in a statement to the press. “Honestly, we were just kinda following the tropes, I didn’t think he’d actually see it or anything. I guess you shouldn’t talk shit behind someone’s back if it’s not something you would say to their face. Next game, the Church is gonna be cool as hell. I have no idea who we’ll make the villains if we can’t, but fuck, I guess we’ll have to figure that out for the first time in decades.”

At press time, however, Pope Francis did praise the pro-Catholic Church message of JRPGs, which is that it’s OK to romance children.