10 great roster additions in Scarlet & Violet: all before the second gym! 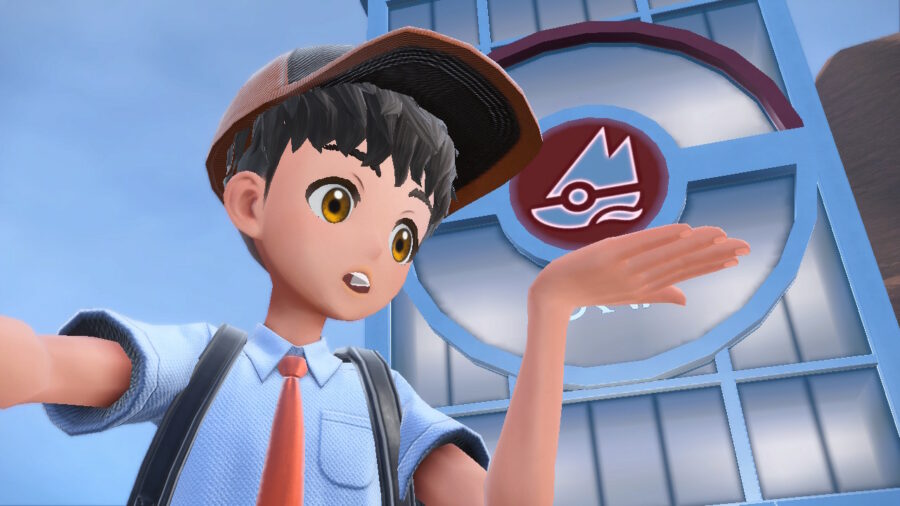 Pokémon Scarlet & Violet features the first open world in the mainline series, meaning you have more options than ever for the best early game Pokemon. Plenty of different Pokémon species are waiting in Paldea’s opening areas, so we’ve compiled a list of the best early Pokémon to catch before the first two gyms. These Pokémon will give you an edge in the opening gyms but will also cover types that will be useful for the rest of the game.

Since gyms are non-linear this time around, we’re classing Cortondo Gym (Bug Gym) and Artazon Gym (Grass Gym) as the first two since they’re the lowest-level gyms and the closest to the game’s opening city, Mesagoza. 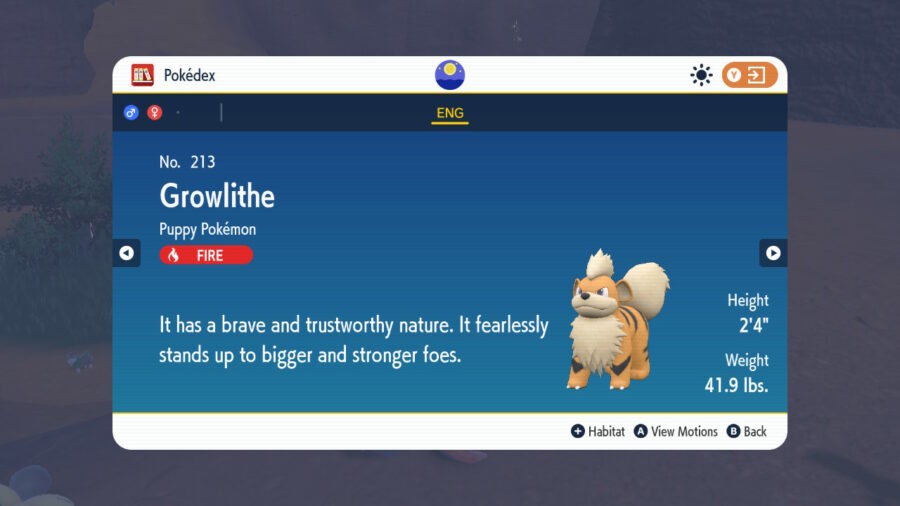 Growlithe can be caught in the rocky roads leading to Artazon, South Province (Area Three.)

There aren’t many fire-type Pokémon to choose from in the early hours of Scarlet & Violet. So, Growlithe is naturally an excellent pick to counter the bug and grass Pokémon in the first two gyms and across the world of Paldea.

Growlithe then evolves into Arcanine when exposed to a Fire Stone, making it one of the more formidable fire-type picks in the game. Arcanine also has the Intimidate passive ability, which lowers enemies’ attack stat at the beginning of battles.

Eevee: A Flexible Fit for any Team 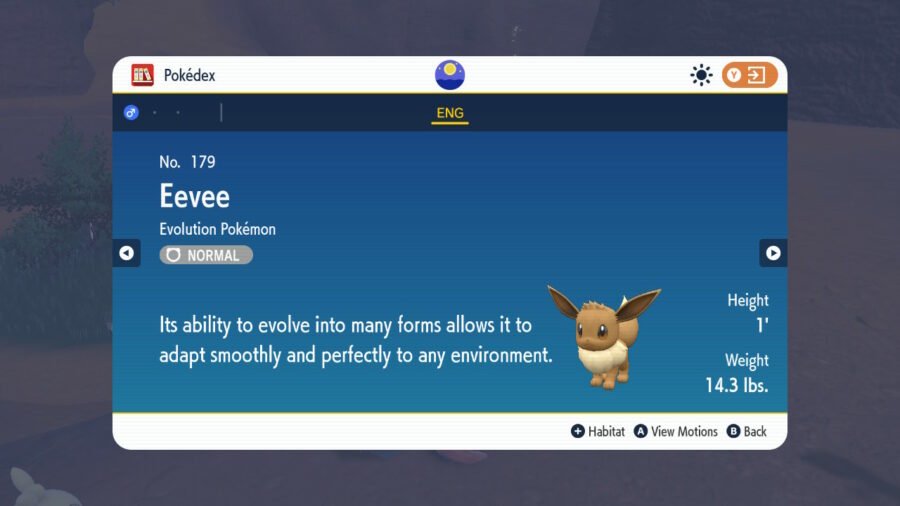 Finding an Eevee is rare, but if you wait at Cortondo until nighttime, you might get lucky and find an Eevee roaming outside the town.

Eevee has been a mainstay in the series for generations, and its host of Eeveelutions makes Eevee one of the most popular picks in every game. You can evolve Eevee into a dark or psychic type Pokémon through leveling up, or you can wait until you find some stones to evolve Eevee into a specific type, like fire, water, electric, ice, etc.

Eeveelutions are quite situational in PvP settings, but for an average playthrough of the single-player, Eeveelutions are adorable and reliable Pokémon to have in your roster. Jolteon, in particular, has incredible speed stats. So if you’re looking to fill a type gap in your roster, keep an Eevee around. 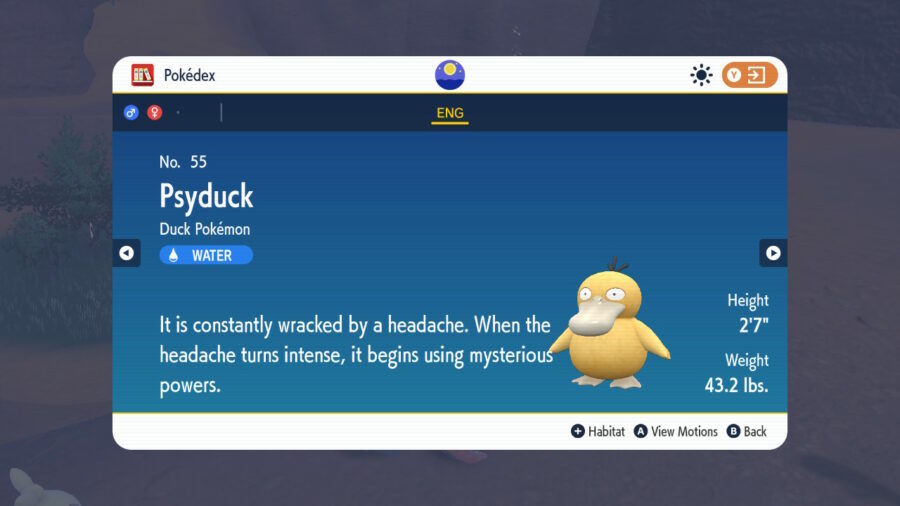 Psyduck can be found in many of the game’s opening areas, mainly around pools of water. Simply look for any ponds, lakes or rivers, and a gang of Psyducks should be lounging about.

Psyduck is a formidable water type Pokémon that will be essential in battles against fire/rock types. Buizel is another early-game water type; however, Psyduck is a more versatile and durable fighter.

Psyduck also has access to a host of psychic-type moves, making it a good pick against fighting and poison types. Psyduck itself is not a psychic type Pokémon, so it won’t be vulnerable against the bug Pokémon in Cortondo gym. Nacli is a rock-type Pokémon that can be caught on the dusty roads in South Province (Area Three.)

Nacli is a decent early game Pokémon since it can quickly deal with the many flying and bug-type Pokémon common in the opening areas. Nacli also evolves into Garganacl, which boasts impressive defense and HP stats. In addition, the Nacli line of Pokémon are currently the only critters that can learn the all-new Salt Cure attack, inflicting ⅛ of a target’s maximum health every turn. Water and Steel type Pokémon are more vulnerable to this attack. 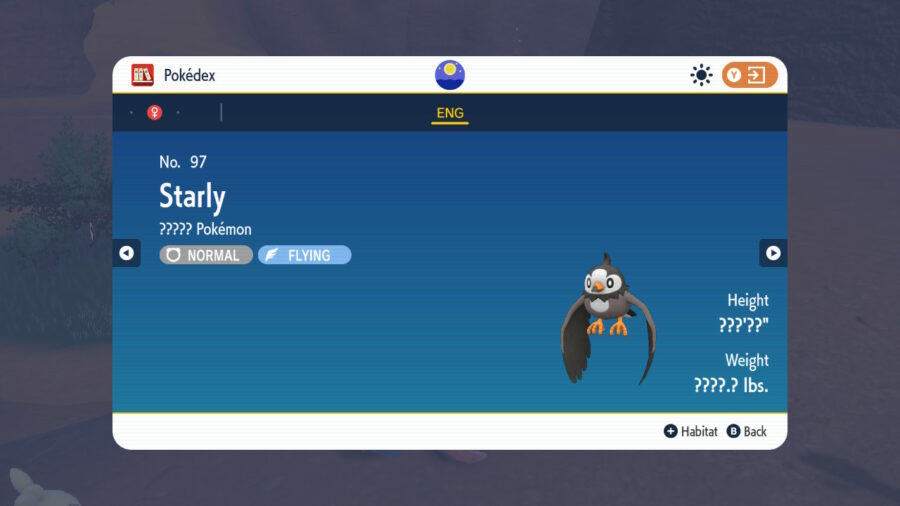 Starly can be caught in several areas and is particularly popular on the road leading to Cortondo gym.

A flying type is a must-have in any Pokémon party, especially during the game’s early hours, since flying types are strong against both bug and grass type Pokémon. There are other flying types in the early areas, but Starly’s very high attack and speed stats make it the better choice. In fact, Starly evolves into one of the best “starter birds” in any of the mainline titles. So if you want a long-term flying type to commit to, Starly is an excellent choice. 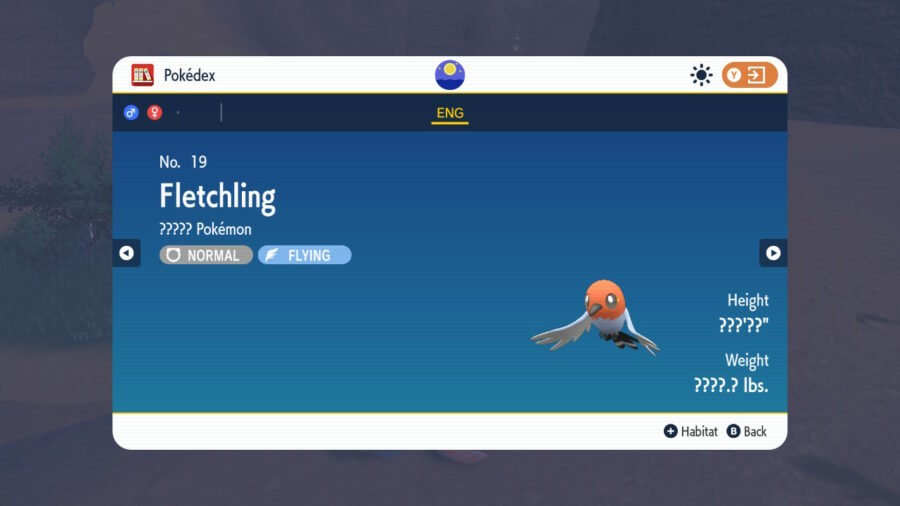 Groups of Fletchling are also abundant in the fields leading up to Cortondo gym in South Province (Area Two.)

Fletchling is another great pick if you’re looking for a reliable flying Pokémon to deal with the first two gyms easily. However, Fletchling’s true strength comes when it fully evolves into Talonflame, a dual flying-fire type creature. This will eventually give you an edge when it comes to the Ice-centric gym in the later stages of the game. 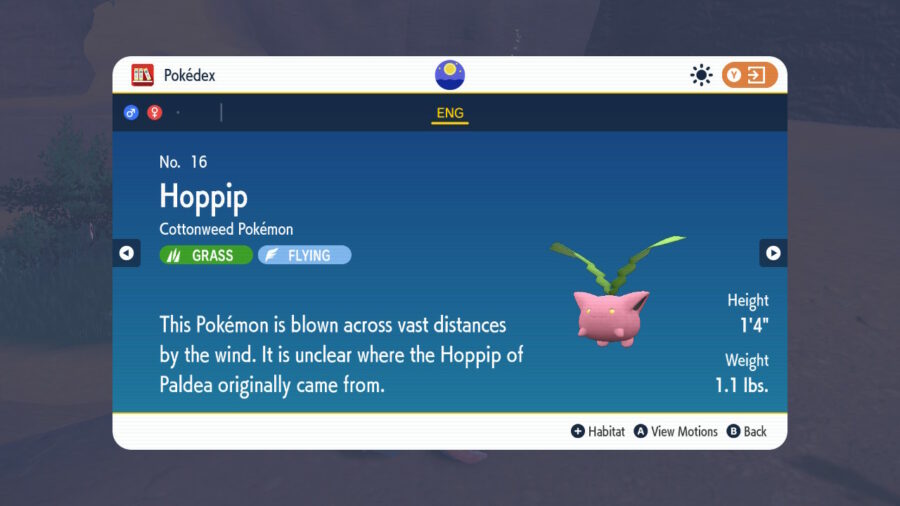 Hoppips can be found in multiple early-game areas, including the road up to the school in South Province (Area One.)

Hoppips have very good special defense stats, making them resilient fighters in tough battles. As a grass Pokémon, Hoppip will help you against the various rock/ground type Pokémon you’ll surely encounter in the early areas. Hoppip also evolves into a grass-flying type, negating its weakness to flying-type moves.

Hoppip’s biggest strength early on is its status-inducing moves like Stun Spore and Sleep Powder. These status effects will greatly help in catching tough Pokémon in Paldea. 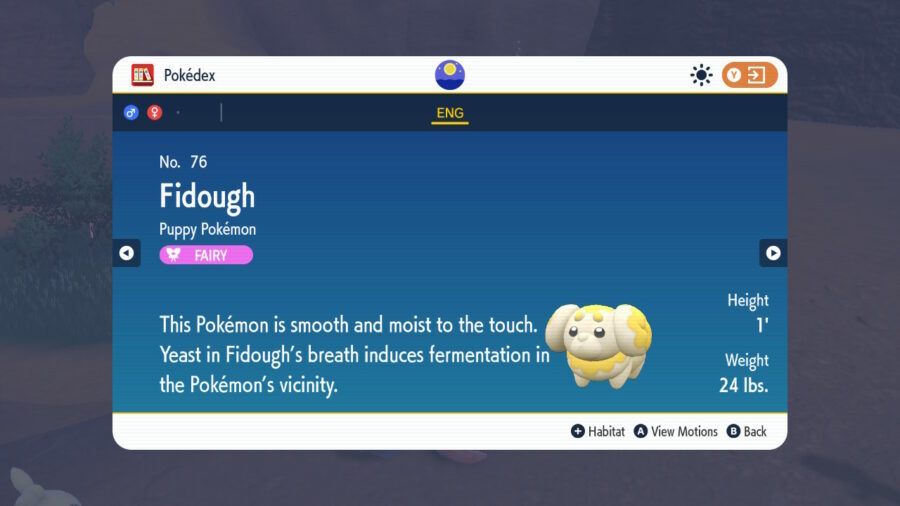 Fidough can be found in many early game areas, including the green fields in South Province (Area One.)

Fidough is an all-new fairy-type dog Pokémon, introduced in Scarlet & Violet. Fairy types are strong against dragon types, which are abundant in the late-game. Fidough evolves once at Level 26 into Dachsbun. Findough’s defense stats are exceedingly good, which could save you in close-call battles requiring endurance. 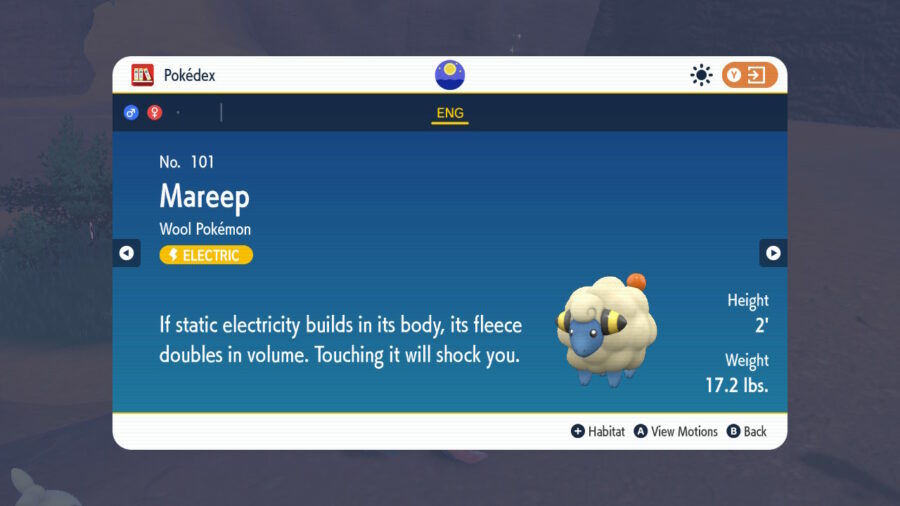 Mareep can be found in South Province (Area Two) on your way to Cortondo gym.

Mareep, the fluffy electric sheep, can be a solid electric pick that can be useful throughout the entire adventure in Paldea. You’ll encounter plenty of flying and water-type Pokémon during the early hours of the game, so an electric type like Mareep will easily handle these encounters. In addition, the water gym that you encounter mid-way through your adventure will also be significantly more straightforward with a Mareep by your side. 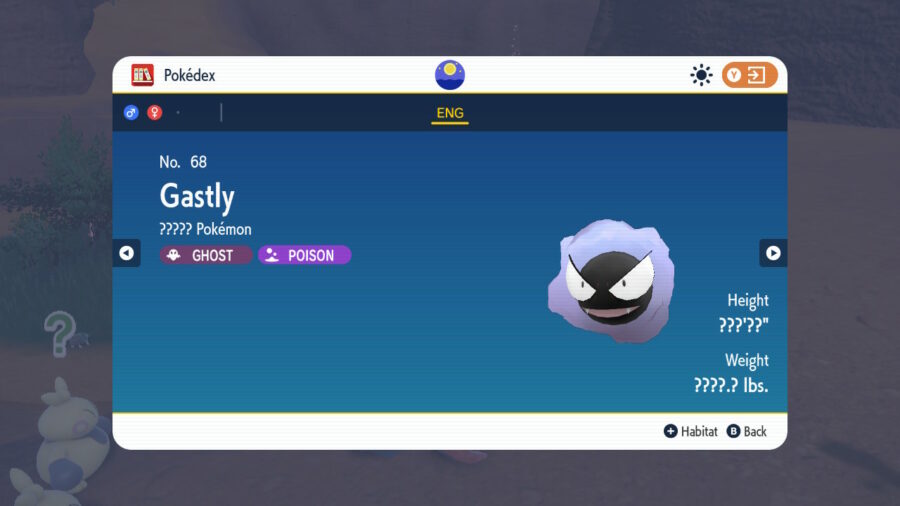 Gastly can be found in various areas of South Province during nighttime.

Gastly is a ghost-poison type Pokémon meaning it will be particularly strong against the grass gym in Artazon. In general, Gastly’s evolutionary line is a strong long-term addition to your party. Gastly’s speed and special attack stats are especially strong, allowing it to get the upper hand in battles by going first. Ghost type abilities are also strong against Ghost type Pokémon, so you’ll be able to deal massive amounts of damage in the Montenevera gym, as long as your Gastly goes first.