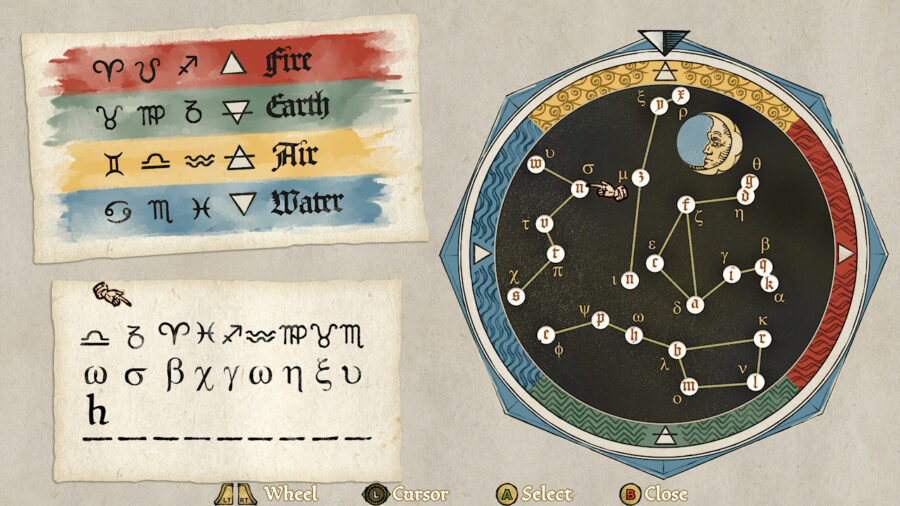 Pentiment’s murder mystery leads to several suspects in the town of Tassing. Multiple characters have a motive in the Baron’s death, including the Widow, the Sisters, Lucky, Martin, and the Prior Ferenc, who is the subject of the Occult Hands quest. If you’re suspicious of the Prior, there’s plenty of evidence to convict him with, as long as you know where to look and how to solve the puzzle in his house.

You can find his volvelle from the beginning of the game, and even solve it before the Baron’s death. However, you won’t be able to solve Pentiment‘s Occult Hands puzzles, complete the quest and fully investigate Prior Ferenc until after Baron Lorenz is murdered.

How To Find The Occult Hands Puzzle In Pentiment 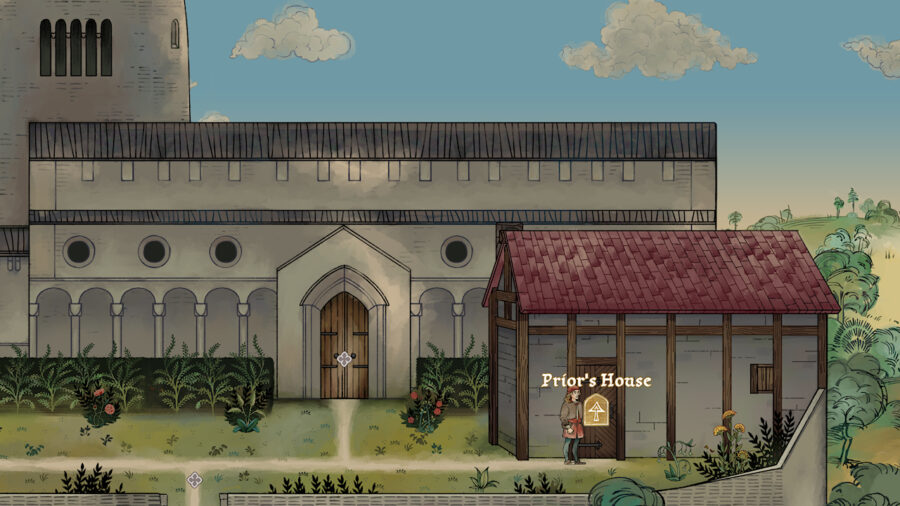 During Act I, The Baron, you can find a volvelle in the Prior’s house, just outside the scriptorium. This gadget features four elemental symbols on the outer rim, as well as Greek and Latin letters. If you chose the Occult backstory for Andreas, he’ll recognize this as an occult tool. Likewise, Andreas will recognize the tool as a cipher of some sort, but you’ll need a code to decipher first. 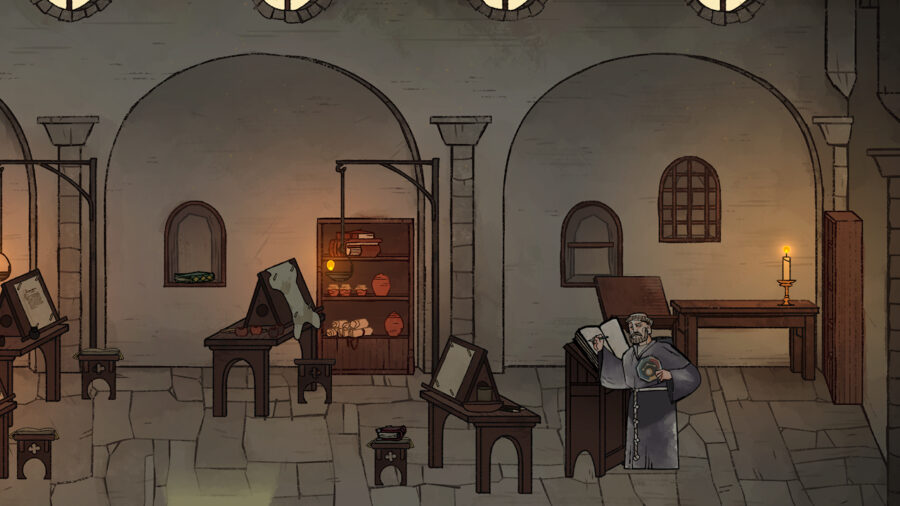 On the first day after work, Andreas will drop a bowl and kneel down. The Prior will hurriedly come into the scriptorium and scribble something into his book at the back of the room. Once he leaves, the game will initiate a conversation with one of the nuns. After that encounter, you’re free to walk to the back and take a look. You’ll be able to find astrological symbols that correlate to the elemental signs in the volvelle. Below it will be symbols that Andreas doesn’t recognize.

If you gave Andreas a Heaven and Earth backstory, he’ll be able to decipher the code himself. Otherwise, you’ll need to sneak into the library at night or talk to Doctor Werner in town. Speaking to the doctor is the easier option. Then, return to the Prior’s house to decipher the code.

How To Solve The Volvelle: Occult Hands Puzzle – Pentiment

Now that you have the code and the astrological signs, you can complete the puzzle. It looks more complicated than it is, but we’ll walk you through it.

The first astrological symbol correlates to Air. So use the gamepad’s triggers to spin the outer wheel until the sign for Air is at the top of the volvelle. Press A (on a gamepad) to select the correct letter, and it’ll translate to H.

Keep following the piece of paper at the top and align the outer wheel’s elemental symbols to the astrological signs.

In the end, it’ll spell higerhard, which Andreas will recognize as ‘here lies Gerhard,’ one of the buried brothers in the Abbey. 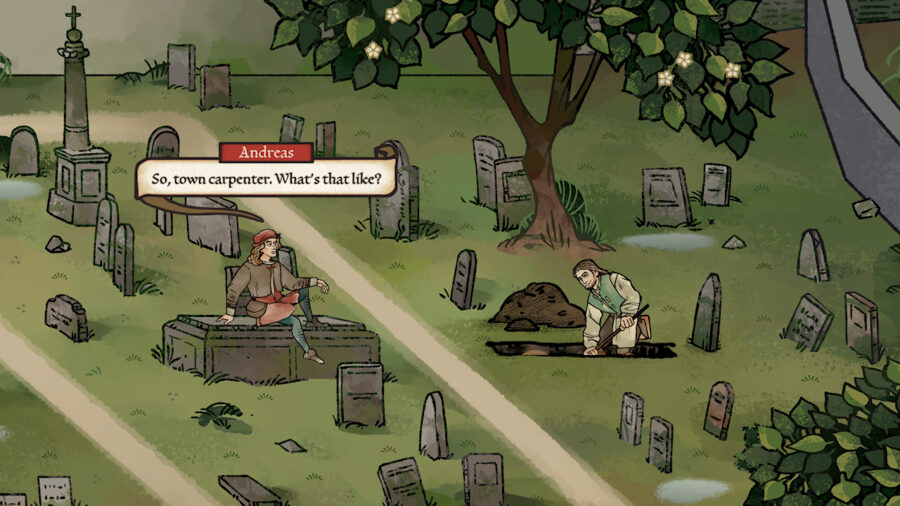 You won’t be able to investigate this case further until after the Baron’s death on the second day. After the Baron dies, return to the cemetery and find Gerhard’s grave on the far Eastern side. Andreas will see the grave has been tampered with.

You could ask the Abbot for permission before digging up the grave, but it will be hard to convince him based on your previous actions. You can still dig up the grave without his permission. Find Otto in town and ask him for help. You don’t need to lie to Otto about gaining the Abbot’s permission – he’ll respect you even more if the Abbot doesn’t approve.

While Otto digs the grave, all you need to do is walk around the cemetery and look at the other graves. Brother Mathieu will walk in on you at some point; Otto will respect you if you don’t hide. But, even if you can’t convince Mathieu, he can’t stop you from digging the grave. 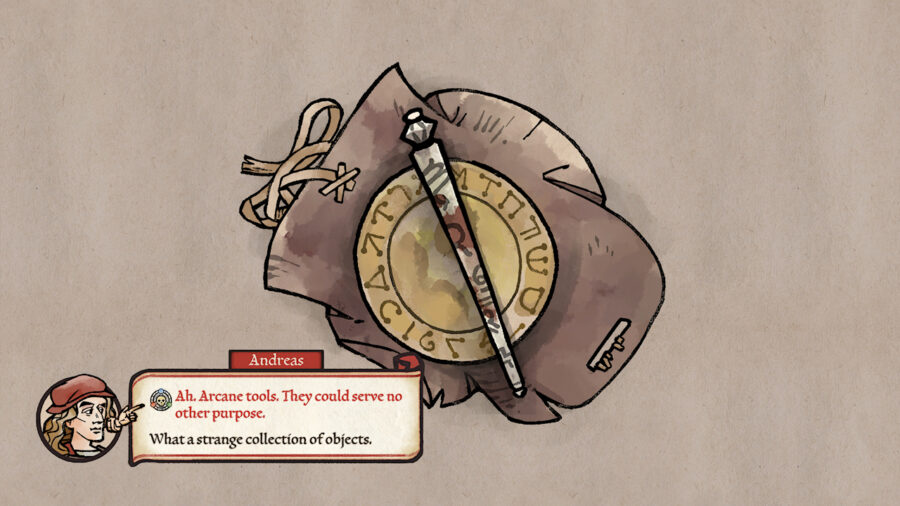 Once Otto is done, you’ll find a series of Arcane tools and a silver rod with dried blood on its side. If you inspected the Baron’s body, you’d see the cause of death was a blunt object.

You can find a letter from the Prior to the dead Baron in the guest house, just outside the Abbey. It seems the Baron and the Prior had taboo occult interests. The Baron was blackmailing the Prior to perform forbidden arcane rituals.

Did Prior Ferenc Kill The Baron In Pentiment? 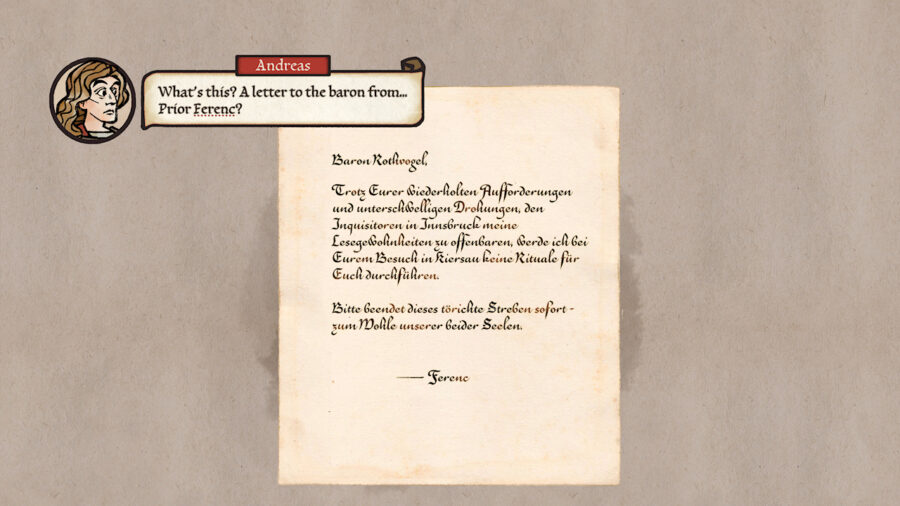 At the end of Act I, you’ll need to present evidence and accuse one of the suspects. The letter of blackmail you can find is definitely a motive for the Prior. All of the suspects have their own motive, though.

The silver rod lines up with the blunt force wound on the Baron’s head, making it a believable murder weapon. The Prior’s suspicious actions also make him look guilty since he hid tools in a grave and concealed them behind a complicated contraption.

Although, he could have simply been protecting himself against the Baron’s blackmail – hiding his occult interests, just in case the Baron told anyone.

The Occult Hands investigation will give you enough evidence to blame the Prior successfully, but the game won’t tell you if you’ve made the correct decision.