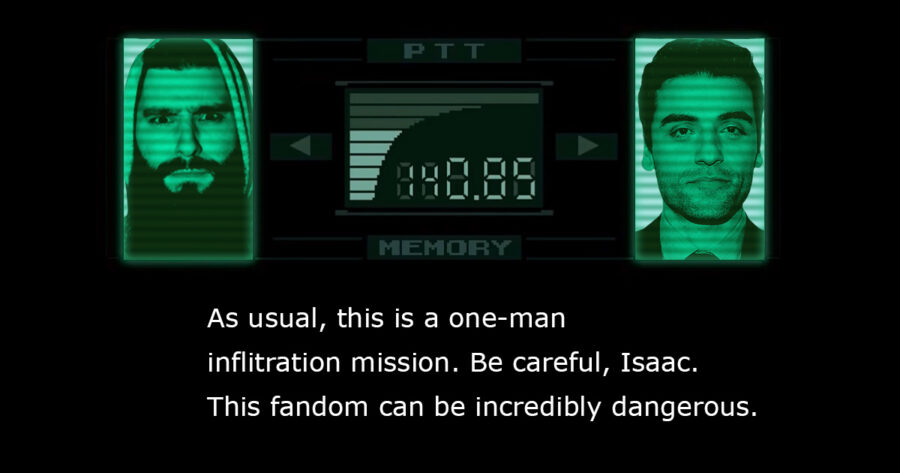 “Solid Snake is a character I’ve been dying to play for years now, so when I got the call I couldn’t have been more excited… At least at first,” said Isaac, sipping a mug of tea with honey to soothe his throat after the excruciatingly long call. “We started off talking about the vision for the film, and then out of nowhere Jordan starts going off about DARPA and what it means to be a soldier. I’m so fucking lost now, but I really don’t wanna call this dude back and ask what the hell is going on.”

While Isaac left the call frustrated and confused, Vogt-Roberts insists that the call could’ve been shorter if Isaac had simply paid closer attention.

“I was just trying to give Oscar some character notes, but every time I said a word he didn’t know, he’d repeat it in the form of a question and I’d have to explain it in further detail and show him a bunch of stock footage of old politicians shaking hands,” said an exhausted Vogt-Roberts. “The whole call could’ve been over in ten minutes if I didn’t have to explain the concept of a meta-narrative to him three goddamn times.”

Although the call was much longer than expected, Isaac explained his reluctance to skip ahead and possibly miss some important information.

“It was tough staying on the line for so long, but I know as soon as I start skipping calls, I’m gonna end up filming a scene where Snake has to fight a boss and I’ll have no clue how I’m supposed to beat them. Even if these calls take forever, sometimes there’s some important shit in there. So I stayed on the line, mostly out of spite, but also to hear if Jordan thought it was possible for love to bloom on the battlefield.”

At press time, Isaac had hung up the codec call, only to walk three steps down a hallway and receive another urgent, long-winded call to discuss every minor logistical detail of the movie’s production schedule.