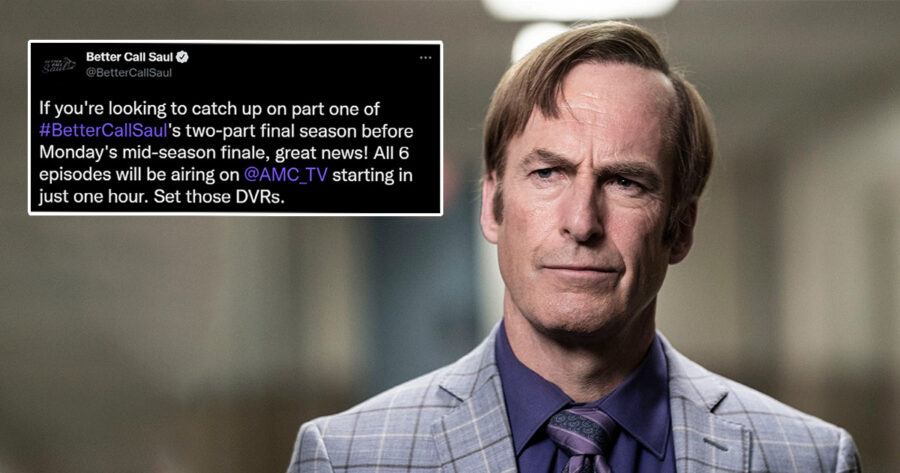 The much-anticipated series finale of Better Call Saul airs tonight on AMC and if you want to watch it as soon as possible to avoid spoilers, it’s going to cost you. Heads up: you also shouldn’t read the last paragraph of this article if you’re looking to avoid spoilers for the newest season of the show.

I, like many people my age, never got a cable box after moving out of my parents. I stopped watching Better Call Saul in 2017 because it was too inconvenient to keep up with as new episodes dropped. With the final season catching some buzz, I decided to restart the show and catch up with everything they had on Netflix.

And yet, when I went to seek out where I could subscribe to watch the newest episodes only to find AMC+, a service that should not even exist, lets you watch the latest episodes with commercials. But that’s just it though… the latest episodes. As in like only the last three to air even though there is nearly a full season 6. Not to mention, the app barely exists on most devices — sorry to anyone who’s still using a dusty PS4 to watch all their movies and TV.

It seems like the only way to catch up on Better Call Saul, or watch each new episode as it airs without a cable box, is to buy the full season online for $25 through Amazon or YouTube, but that comes with its own flaws. On Amazon, the episodes don’t drop until midnight EST, instead of at 9 p.m. when they are on television. And on YouTube, well, if you want to see some of the saddest comments in the world, check out each Better Call Saul episode from this season to see people begging for the new episode to drop sometimes as late as 12 hours after the show aired on television — and keep in mind, these are people who are probably scrolling past spoiler-filled thumbnails as they search “Better Call Saul” in the app over and over again every Monday night.

Despite Better Call Saul being heralded as one of the greatest television shows of all time (or at least one of the best of the ten thousand shows currently airing), AMC seems to be doing everything they can to promote the show besides just making it accessible. Back during the midseason finale, this was a real tweet from the marketing team.

If you're looking to catch up on part one of #BetterCallSaul's two-part final season before Monday's mid-season finale, great news! All 6 episodes will be airing on @AMC_TV starting in just one hour. Set those DVRs. pic.twitter.com/9AuxsHS20K

No marketing account should be using the call-to-action “Set those DVRs” in 2022. No one has heard the term DVR in over a decade. If you have, it was probably in an episode of Better Call Saul set in 2005 with Jimmy McGill saying, “Hey, remember DVRs?”

Of course, you can be patient. Wait for the final season to hit Netflix in a year or so. Though no amount of Twitter muting can protect you from fans firing spoilers through your feed like a bullet through Howard Hamlin’s head. So if you’re looking to catch up on the season before it ends tonight, I hope you have an Amazon gift card or a nice friend like me you can borrow a password from.