Suck My Dick, Haters: Elden Ring Is Breath of the Wild Plus Dark Souls 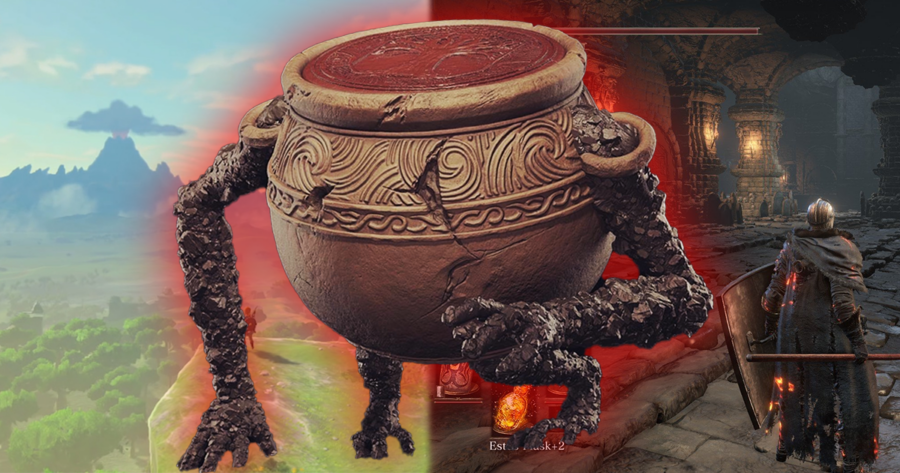 What’s the matter? You’re upset that people often compare things to these two games? You think it’s silly that people often say that things are inspired by two of the most influential games of all time? Guess what: things are sometimes inspired by other things, especially things that are really good and popular. What a big surprise that Elden Ring is heavily influenced by two monumental games that each build upon a legacy of similar games, taking their ideas and filtering them into something new and original! Suck my dick, etc. Sorry, but we’re not gonna hold your hand like these other gaming websites.

“Oh so every game with grass and a glider is a Breath of the Wild clone now? You know there’s that painting of the guy looking over a cliff that’s super old, right?” OK, no. BUT! Obviously the creators of games like Genshin Impact and Immortals Fenyx Rising (still can’t believe that’s the name of a real video game) thought so when they made games that are clearly capitalizing on the popularity of BOTW. But Breath of the Wild is more than just grass and gliders — Breath of the Wild is so good because it’s the first open world game in a long time to genuinely plop you down into a world where the main quest is kind of just a side thing. There’s no big arrows or an abundance of icons or side quests demanding you to finish up a checklist of tedious tasks that end up feeling like homework.

And Elden Ring is the second game since Breath of the Wild to pull off that genuine open world feeling! You’re just a guy in a big scary world and there’s a cool looking thing in the distance that probably has a special item or boss fight if you run over there and find out. Eat my fuckin asshole if you think that’s also true of, like, Ghost of Tsushima or some shit. And sure, Elden Ring doesn’t have climbing, but it is the first FromSoftware game to add jumping, which is like kinda the equivalent for them because they’re kinda slow at adopting new features; give ‘em a break.

OK well Elden Ring is literally made by the same people who made Dark Souls so it actually fucking makes sense in this comparison!

I don’t know what to tell you! It’s literally just a copy and paste of the combat system from the Dark Souls games. The game is Breath of the Wild plus Dark Souls. It just literally is. I’m sorry if that bothers you, but that’s what the game is. There’s nothing you or I can do about it. Shut down the petitions and stop calling your Congressmen, because we all just have to live in the world where Elden Ring is Breath of the Wild plus Dark Souls.

And if you’re thinking “well Skyrim did all that too,” then you’re right. Because Elden Ring is Skyrim But With A Good Combat System. Dumbass.