RIP Spellbreak: The One Game I Was Sick At Because I Played It at 2am Against Tired Children and Bots 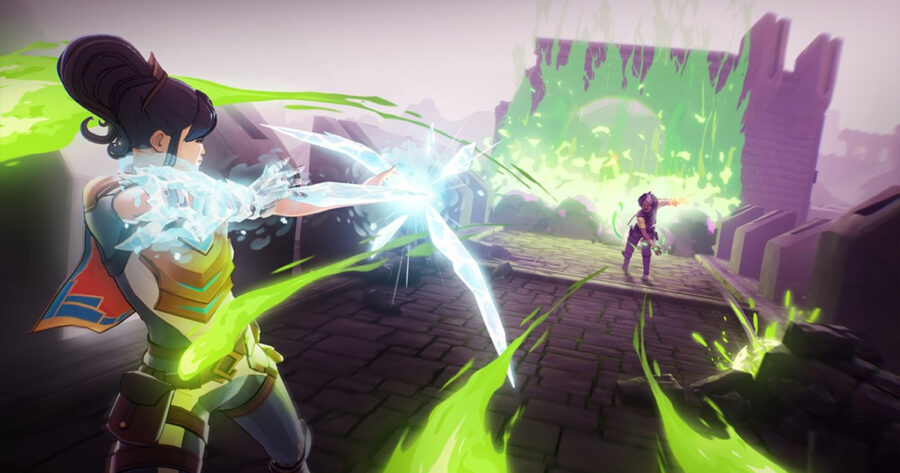 Today is a dark day for all Breakers, which is apparently what we call the people who play the game Spellbreak, according to a message from the development team that was posted to their blog Wednesday. Why is it a dark day? Were they unable to find a legendary belt equipment piece to charge up with armor shards? No, no, it’s far worse than that. Unfortunately, the developers of Spellbreak have announced that they are shutting down the game for good in 2023.

If you have no idea what I’m talking about, I’ll break it down for you. Spellbreak was a free-to-play battle royale game that launched in 2020 where you could play as a wizard wielding two of six elemental powers (fire, earth, wind, lightning, ice, and poison). You chose one main element at the beginning of the game and then you could pick up a secondary element somewhere on the map, often combining the powers of your two elements to make unique obstacles for your opponents. Example: shoot a tornado and then light it on fire. Shoot a path of ice and then add electricity as it melts. Shoot a toxic cloud and then freeze it to make a big, useless, green thing.

In other words, Spellbreak was the second worst adaptation of Avatar: the Last Airbender after M. Night Shyamalan’s 2010 film.

Spellbreak may not have been the best game, but I had something like 100 hours in it, which is less than the diehards, but more than 99% of players, I really hope. What I loved about Spellbreak was that it made me feel like a god. Not just because I was a master of the elements, soaring through the air, raining bullets of ice and poison on my enemies, but also because it came out right at the beginning of the pandemic. I had just started as the first and only employee of Hard Drive and my sleep schedule was destroyed, so I played a ton of Spellbreak on the Switch with my friend when he got home from working a late shift at the hospital. Which means that we mostly played at 2 in the goddamn morning. And do you know who else is playing Spellbreak at 2 a.m. on a weeknight? Tired children and bots.

I’m not very good at battle royale video games. I have won maybe two games of Fortnite ever. I have never won a solo Fall Guys. Whenever I grab the helicopter in Warzone, I crash it into a building. But when my buddy and I played Spellbreak on the Nintendo Switch at 2 in the morning? It was rare that we lost a game. We were champions of whatever the fuck they called the obviously-trying-to-be-Fortnite battlegrounds of Spellbreak. (Looking it up now: it was called the Hollow Lands. Sure.)

In Spellbreak, the max lobby size was 42 players. Our games usually launched with about 8. The bots in the game were dogshit, so it was really just a game of Seek and Destroy and we terrorized. It was a goddamn blast. It was a shining example of why a lot of people who are really good at video games hate skill-based-matchmaking — because it’s fun to be really good at something.

But Spellbreak, very obviously, wasn’t perfect. The UI was incredibly clunky, the graphics were incredibly clunky, and the gameplay was incredibly clunky. The equipment upgrade system was annoying, turning the first 10 minutes of any game into a scavenger hunt for items that were just strictly better if they were a better rarity. The end-game was often extremely chaotic and laggy, too. A lot of times when I played the game, it would just crash and I had to unplug my Switch to get it to even turn off.

Hell, nobody was even quite sure why the game launched with a battle royale mode other than the fact that it’s what every other game does. Spellbreak fans — sorry, I mean Breakers — were clamoring for some sort of team deathmatch mode since the minute the game launched. Maybe if the game didn’t feel like such a free-to-play mess from the start, more people would have checked it out longer than the game or two they tried when downloading the game the week it came out. There was also a bizarre battle pass that came out, eventually, with a lot of annoying voice acting yelling lore at you that you had to listen to over and over again.

The Spellbreak devs did eventually add other modes, but browsing the Reddit right now (I stopped playing the game sometime in 2021 because something else probably came out around then), it looks like they did a whole bunch of annoying shit like make the movement speed much slower and make the equipment pieces you find on the map stronger. Weird! Remember when I said the movement was the best part and the equipment was the worst part? It also sounds like the game still does not function, so that’s bad too, I suppose.

At the end of the day, I hope people remember Spellbreak as a really exciting idea that was executed not poorly but not well either. Battle royale games don’t have to just be people shooting at each other. These days, a battle royale game can be Tetris or Mario or Takeshi’s Castle But Cuter. And you know what? You don’t even have to make a battle royale game! Just making the max game size 42 people doesn’t mean you’re guaranteed to actually get that many players. You might leave your biggest fans battling it out with six children and 30 dumb bots.

Oh well. Maybe a fan will take the gameplay of Spellbreak, change some of the nonsensical words to other nonsensical words (Did fire need to be called Pyromancer? What if it was called Fire Guy?) and basically recreate the game but Actually Good.

It won’t be me, though. I’ll be on the Switch ruining some kid’s life on the one night his parents let him stay up playing whatever the next free bullshit is.