A quick look at everything announced in the September 2022 Nintendo Direct. 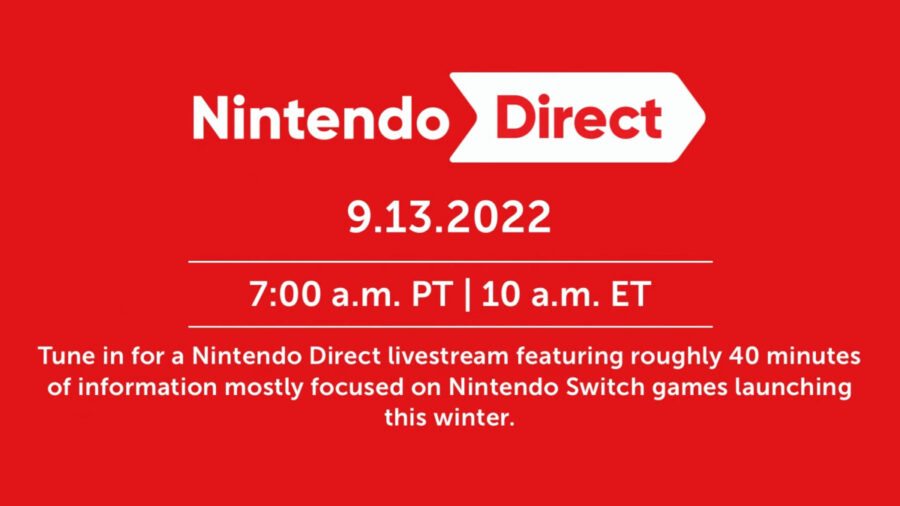 On this day, September 13, 2022, a 42-minute Nintendo Direct took place. Nintendo Directs are always a big deal for Nintendo fans. The company uses this format to announce their biggest surprises, as well as a lot of small surprises that underwhelm fans hoping for a big one. Here’s the lowdown.

The September Nintendo Direct opened with every Nintendo fan’s favorite series: Fire Emblem. The trailer revealed the first gameplay of “the toothpaste man,” called so by fans due to his red-and-blue toothpaste-stripe hair color first seen in leaked screenshots. It seems those leaks were the real deal. The game is called Fire Emblem Engage, releasing 1/20/23. It looks like traditional Fire Emblem tactical warfare, with a special mechanic: The heroes can perform a fusion dance with old characters from the series to borrow their powers.

Next was a round of headlines:

Next on the September Nintendo Direct schedule, they announced the first Splatfest for Splatoon 3. These are contests in which players choose a team, then earn points over a series of intense battles. This time, the teams are based on the question “what would you take to a deserted island”: Gear, Grub, or Fun. It’s not likely that anyone who chooses “Fun” will automatically die in battle, as they would on the deserted island, but it would be fitting. The Splatfest will run from the 23rd to the 25th of this month.

Then, a major announcement: Octopath Traveler 2. The original Octopath, released on Switch in 2018, was a big beautiful HD-2D RPG, but it had a couple flaws. Although the eight new characters have the same classes as the cast of the first game, the setting is dramatically different. It went from a fairly standard medieval setting to a more modern one, including both samurai and cowboys – a major upgrade. A sequel to such a massive game is an ambitious undertaking, and it will be interesting to see how it turns out. Releases 2/24/23.

The second round of September Nintendo Direct headlines:

Next, a round of N64 titles added to the maybe-slightly-overpriced Nintendo Switch Online Plus.

Holy crap, Goldeneye. That’s a big one: a well-loved multiplayer shooter that required Nintendo to get the license for James Bond’s license (to kill). They’re adding online gameplay as well. All these games are planned to launch over the next several months.

Some more titles from the September Nintendo Direct:

Suddenly, a special guest arrives: Miyamoto! He talked about the Mario Movie and Super Nintendo Land, but that’s meatspace stuff so I zoned out.

“I’d like to talk a little bit about Pikmin,” he says. Wait, what!?

False alarm: he just wanted to explain how the mobile game Pikmin Bloom works. I guess no one is playing it and it’s making him sad.

False false alarm! He just officially announced Pikmin 4, releasing next year! No gameplay yet, but this will have to do for now… but it’s worth remembering that the last time Miyamoto said Pikmin 4 was almost finished was seven years ago.

Last round of game announcements in the September Nintendo Direct:

Then, a quick sizzle reel of games:

Next to last, they announced Kirby’s Return to Dream Land Deluxe, another Wii game ported to Switch. It first launched in 2011, a solid if basic entry in the series. The Deluxe version will have better multiplayer and a little extra content.

The very last announcement in the September Nintendo Direct is a long-awaited update to The Legend of Zelda: Breath of the Wild 2. It was a short trailer with a little new footage, and an official subtitle reveal: Tears of the Kingdom. Its official release date is now May 12, 2023. There wasn’t much actual gameplay in the trailer to analyze, although I did see a neat glider platform, but the game theorists will be along with their five-hour analyses by tomorrow. Let’s hear it for those guys!