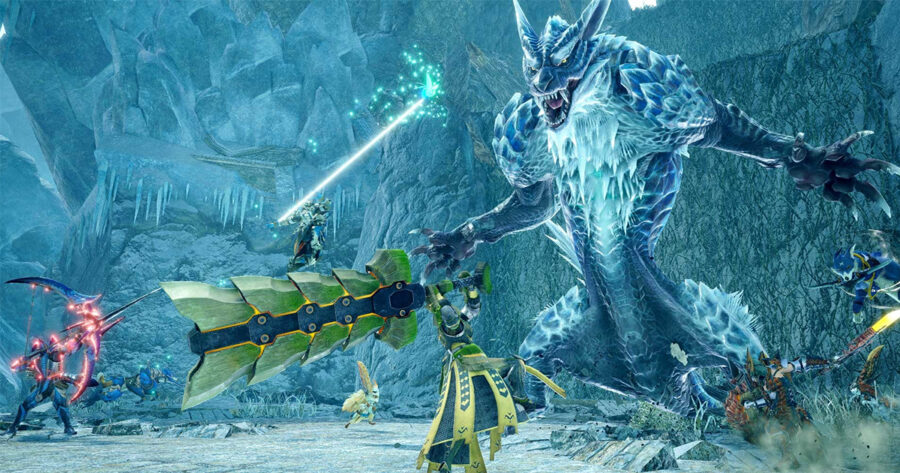 Monster Hunter Rise: Sunbreak released last week, and everyone in the Minus World office has been playing it religiously since last Thursday — and by everyone at the office, I mean just me. We don’t have an office and no one wants to play with me.

I’m not ashamed to admit I ignored work emails, calls, the holiday weekend, and desperate messages from my family wondering if I was OK in order to get in some good quality monster smacking time. Now, a solid week after release, I was finally forced to tear myself away from it after my “boss” threatened to “fire me” if we didn’t get a review out by the end of the week (I honestly don’t know if this website has a boss or if anyone works here at all).

After spending dozens of hours playing it, I can give Minus World’s official recommendation that Monster Hunter Rise: Sunbreak is what we all need to collectively hyperfixate on for the next few weeks, and subsequently burn ourselves out on and try not to think about the days of lost time sunk into it.

Since our review copy must have gotten lost in the mail (hey Capcom), I started my review at Master Rank 5 after fighting Shagaru Magala, which was around 30-35 hours into the expansion. This is on top of the time I’ve put into it after the initial Switch release (oh god, it was 103 hours) and after 15 hours speeding through the Rise main campaign on PC in preparation for the Sunbreak release. I’m only listing this so I can give context, credibility, and to somehow justify the multiple days of my life spent playing Monster Hunter: Rise as having a greater purpose.

I want to take time to clarify now: I love Sunbreak. More Monster Hunter is always a good thing, and Sunbreak delivers with more monsters to hunt, more maps to hunt monsters on, more armor and weapons to hunt monsters with, and more ways to prepare to hunt those monsters. You’ll probably need to have a wiki page or two or twelve open to keep track of it all. It’s wonderfully overwhelming, which makes it all the more satisfying when everything clicks and you realize how it all fits together.

Monster Hunter has always been easy to fall in love with. You pour your heart and soul into it for about two weeks, then slowly drift away while realizing this amount of time probably isn’t healthy. You’ll break up and move on for a little while, returning for a hook-up or two every couple of months when you hear something new has been added, until eventually you move onto the newer, sexier Monster Hunter that’ll get released in a year or so.

This isn’t by any means a new concept: attention spans are funny, unreliable things that can flip on a dime. You can spend weeks organizing your Animal Crossing town to perfection, and then leave for six months only to come back horrified at what you left behind. You can hype up one of the most anticipated games of all time until release, then maybe put five hours into it before indefinitely shelving it.

That’s why I’m advocating now, while the iron is still hot, that we all collectively decide to put unhealthy amounts of time into Sunbreak for the next little while. It deserves to be the next cultural obsession, until we all decide to move on and focus on Xenoblade Chronicles 3 or whatever.

Sunbreak brings plenty of newer, shiner additions to Rise that can help support us all developing this unhealthy little obsession. The hunts are still fun and have a bit more added complexity with new endemic life and wirebugs. The minutiae of planning a hunt is fleshed out even more with new food options and expanded buddy features, and the new follower quests are a delight and a great way to give a little more life to the NPCs.

The story is nothing to write home about, mainly because every recent Monster Hunter release has fallen into the same exact story beat. Oh, you’re telling me some outside force is affecting the monsters, making them more aggressive? I definitely have never heard anything exactly like that happening before in a Monster Hunter game.

Even if the story is weak, it’s not something I’m going to detract from Sunbreak itself. People don’t flock to Monster Hunter to get an enriching storyline or to heavily invest themselves in the characters. The story serves its purpose well, and its purpose is to give a valid reason for us to go out into nature to beat the everloving shit out of the wildlife.

Speaking of, beating the everloving shit out of said wildlife is exactly what hooks you in hard to Sunbreak. Whether it’s the fast paced nature of the hunts themselves, or the downtime prepping for a hunt and designing a new build, it’s incredibly easy to get addicted and fall into the “just one more hunt” mentality until you notice it’s 4am and you have six missed calls wondering why you didn’t show up to work yesterday.

Monster Hunter Rise was already included in the list of games that I have an embarrassingly high amount of hours into, and Sunbreak adds even more for me to comfortably recommend that we should all be consumed body and soul by it for the next 14-21 days.

Now if you’ll excuse me, I have to call my mom and explain why I missed dad’s funeral.