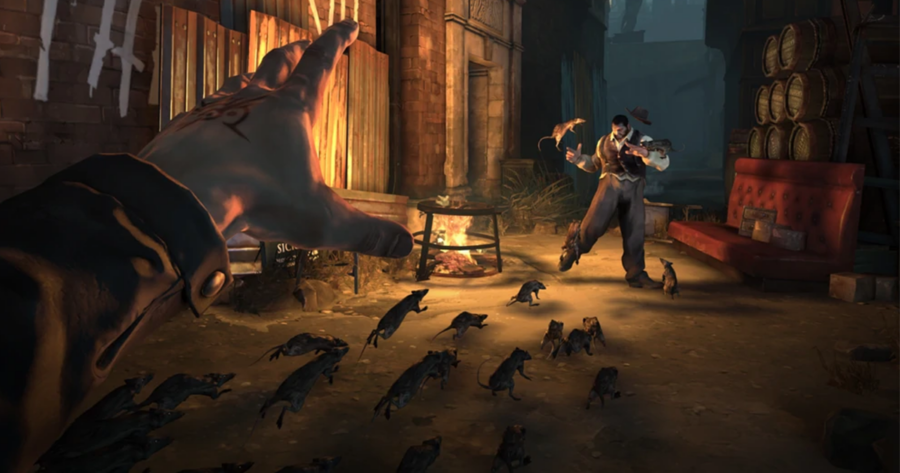 Ten years later, walking through the streets of Dishonored’s Dunwall feels like a deja-vu-ridden fever dream. Players enter the gothic industrial city, which provides the setting Arkane’s masterful 2012 immersive sim, during the height of a plague. City authorities either fail to successfully contain the plague or simply deny it outright out of fear or personal gain, all while the corpses continue to pile higher. You know, some light escapism from our current reality.

Dishonored’s parallels to 2020 and the COVID-19 pandemic are clear, and have already been written about by people much smarter than us. Going forward, it will be nigh impossible to play the game without the pandemic in the back of our collective minds. It’s a real shame, since Dishonored’s social commentary was already biting when it was released ten years ago.

Dishonored puts players behind the spooky skull mask of Corvo Attano, the Royal Protector of Empress Jessamine Kaldwin. Kaldwin has about a minute of screen time before a group of steampunk cybergoths stab her through the gut in the game’s prologue. Since he’s an early 2010s silent protagonist, Corvo doesn’t so much as flinch when he’s blamed for the murder and dumped in prison.

From there, Dishonored is your oyster. You’re welcome to Michael Myers your way through things, but like a good rack of ribs, it’s best to take the low and slow approach to the game’s nine wide-open missions. The stealth gameplay is top-notch, but staying restrained also lets you observe Arkane’s excellent worldbuilding.

You’ll see things like cops harassing women, and cops being cruel to animals, and cops getting drunk on the job, and cops putting on stilts and firing explosive arrows into crowds of people, and –

Wait, is Dishonored anti-cop? No, not at all. Dishonored isn’t just anti-cop. Dishonored despises anyone with any kind of authority whatsoever. Politicians, the military, religious leaders, aristocrats; “fuck em, they’re all the pricks”  the game says before gleefully tasking you with burning it all down.

In terms of commentary, Dishonored is more Spitting Image than Bioshock, leaning heavily into absurd yet still plausible situations in its satire. In the “Return to Dunwall Tower” chapter, it’s revealed that Dunwall’s rat plague was caused by Royal Spymaster turnered Lord Regent Hiram Burrows, who shipped the infected rats over from a far-flung continent. Why? Because he thought it would curb the poverty level. Burrows only decided to have the empress killed and take power as a means to cover up his own fuck-up.

Dunwall’s elites chose a bafflingly stupid solution to a complex issue, and it’s the ordinary people who suffer for it. That rats themselves are innocent, and oftentimes helpful. You can summon a swarm to attack enemies or eat a body.

Dishonored’s endgame twist rewards players who have been keeping up with its outward disdain for authority. Assisting you on your revenge against the conspiracy to frame is a second group of conspirators supposedly aiming to bring the empress’s daughter, Emily Kaldwin, back into power. Dishonored wants you to be suspicious and see right through these assholes, especially since they personally benefit from your hits. Sure enough, your former allies spike your drink and dump you in Dunwall’s Flooded District. There’s no circumventing the poisoning, Corvo is another aloof goon afterall, but the betrayal is still satisfying even if you predict it. It’s a great, if a little unsubtle twist that’s directly in line with what Dishonored has to say.

Dishonored is a game about power, and it has a low opinion of anyone who abuses their power, including the player. Many will remember the game’s “chaos system,” which changed the gameworld and story based on the player’s in-game actions. There’s nothing stopping you from turning every NPC into ragu, but the game will punish your actions with more enemies and a worse ending. Dishonored gives you an awesome set of tools and powers, but it also gives you a question — “are you going to abuse your advantages like all these other loathsome dickheads?”

As games continue to tackle complex themes and make more nuanced statements, Dishonored’s sledgehammer approach to political criticism is a wonderful change of pace. Arkane has been cagey about the future of the franchise, but leaving a franchise with two fantastic games and some excellent DLC isn’t bad at all. If gaming is a family, then Dishonored is the cool cousin who laughs as the world turns to ratfood from behind the Zumiez cash register.