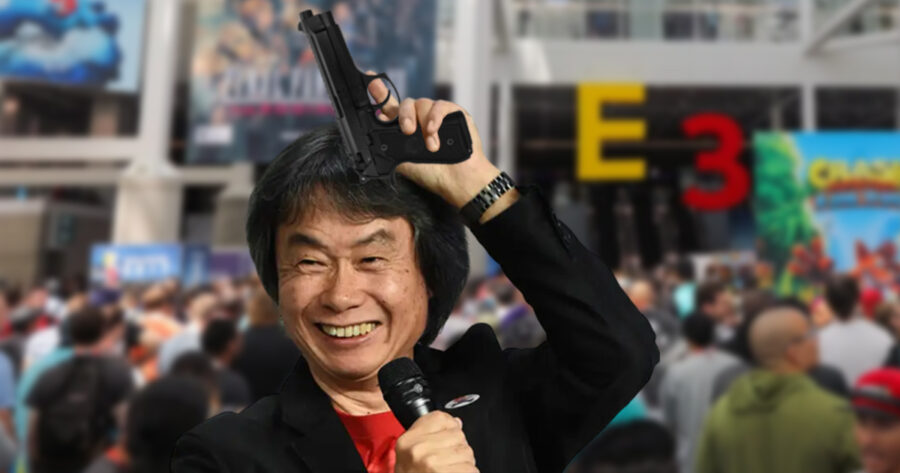 Like Jesus Christ (and Bugs Bunny at the end of Space Jam: A New Legacy), E3 has risen from the dead. With the help of Reedpop, the ESA is primed to bring back the major event that many had written off as unnecessary, especially with more companies pivoting towards digital presentations. Why bother if Todd Howard isn’t at a booth porting Skyrim onto things you give him like it’s his autograph?

The simple answer is that E3 is the lone force saving us from wildcard titans like Nintendo.

Since 2013, Nintendo has been making its presence known with a 30-40 minute direct full of its biggest annual announcements. When it first announced it was ditching in-person press conferences, after multiple years of fumbled live Wii motion control demonstrations, people were stunned. Surely Nintendo couldn’t compete with Microsoft or Sony if Reggie Fils-Aimé wasn’t prepared to leave mid-presentation to fight you in the parking lot for not owning a 3DS.

That move actually worked out pretty well. The concept of digital Direct was bold but still managed to stay in the framework of E3 by posting their presentation alongside other significant shows and keeping a large presence through massive, detailed displays for upcoming games. It became just as major an event as a live press conference, as people knew they’d get at least one exciting game or Smash character from it.

When Covid started disrupting E3s however, Nintendo decided to embrace the chaos with more sporadic mini Directs mostly meant to spotlight 3rd party partners. There was no Zelda, no Mario — only Bakugan. It was an understandable move during the pandemic as Nintendo struggled to get big first-party titles out at its usual pace. But that chaotic streak has only grown as Nintendo is now in the habit of firing off random streams, like a t-shirt cannon being fired at a music festival trying to distract the crowd when the headliner is running late. Now June has passed and the only update we got about Nintendo’s 2022 lineup is that Xenoblade Chronicle 3’s battle system will be a nightmare for anyone with ADHD.

Nintendo is the biggest offender when it comes to unorganized stream cadence, but others are following its lead. Microsoft and Sony both host their own digital streams, which have slowly succumbed to chaos. Sometimes you’ll tune into a Sony State of Play to see God of War Ragnarok. Other times, you’ve just tricked yourself into watching 20 minutes of updates for VR games. Without E3, we’re looking at a disordered world where you just constantly have to watch live streams to keep up with what’s happening. A world ruled by Geoff Keighley. I don’t fully understand what he does and I’m scared to ask.

Look, E3 is cringe. It’s an event where marketing execs make Elijah Wood give the performance of a lifetime monologuing about how much Monster Hunter means to him despite never playing it. But at the very least, it forces game companies to do one bullshit presentation a year so they can justify why we keep giving them money. It’s the one time of year these corporations have to dance like monkeys for our amusement and I refuse to let them worm their way out of it.