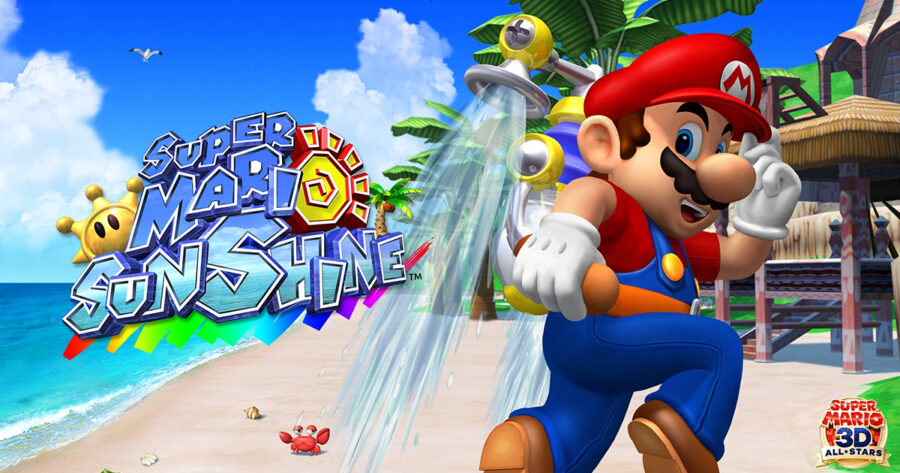 Super Mario Sunshine is celebrating its 20th anniversary today, which means now is a better time than ever to reflect on the game, its legacy, and how mean you all have been to it over the years.

Sunshine had some very big brown loafers to fill when it first launched. Following the monumental release of Super Mario 64, many Nintendo fans were expecting another grand slam. Spoiler alert: it totally was, and you can’t convince me otherwise. In lieu of Peach’s Castle, we would now see Mario wall-jumping and wahoo-ing his way around a vibrant seaside cityscape. You could even ride Yoshi in 3D for the first time ever! It was a revelation. What could people possibly find to hate?

Following its release on July 19th, 2002, reception was… divisive, and has largely remained as such in the 20 years since. People either love this game, or they hate it. They’re either totally right, or they’re totally fucking wrong.

Look, Super Mario Sunshine is not a perfect game, okay? I’m strong enough to admit that much. It has some glaring flaws, which many will be quick to point out on Twitter before even opening this article (I see you). “What about that awful pachinko mini-game? The poison river? Blue coins?!” Yes, I hear you uncultured luddites. The game has a surprising amount of “jank” compared to the typical polish expected from a first-party, mainline Mario title. Yet so many gamers are quick to give a pass to the Sonic Adventure games which have entire physics engines built out of mud, or they’ll say “get good” when someone complains every time the camera in Elden Ring gets lost in a dragon’s asshole.

The platforming and exploration in this game are filled with wonder and glee, which is obvious to anyone with two eyes, two thumbs, and a heart. The game’s hub world, Isle Delfino, feels more lived-in than almost any other environment in the Mario series, making it ripe for discovery. But when some people think of Mario games, they simply think of running, jumping, and collecting coins. And sure, they’d be right to do so. But why limit the poor plumber? Why not give Mario a water jetpack to further calculate his jumps? Why not add an aiming mechanic to make boss fights more varied? Why not add an interesting story with an actual plot twist? Okay, maybe I’m overselling it just a little there.

Many are quick to criticize the game’s overuse of “beach theming” to its levels. Most Mario games have Mario (and sometimes even Luigi!) exploring a vast variety of environments and areas, so the critique is an understandable albeit completely wrong one. It lends itself to making the locations around Isle Delfino feel more like “real” places that you would totally want to relax in while sipping a big margarita. Sometimes you can even see one level in the distance while you’re in another (“Hey, I remember that place!” Yeah you do, bucko!) Areas feel less like “video-gamey” floating platforms, and more like actual vacation spots you’d want to hang out in, unless of course you also hate fun, in which case I see your point.

In a way, it’s a shame that Nintendo has mostly ditched this approach, likely due to poor sales figures (I’ll never forgive you all). The next mainline Mario game to be released was New Super Mario Bros on the Nintendo DS in 2006. We would see Mario return all the way back to his roots while keeping a few new tricks up his sleeve– likely a touch of Nintendo feeling the need to overcorrect a “problem”. Perhaps they mistakenly saw Super Mario Sunshine as a red-headed (or I guess red-hat-ed) stepchild.

We never got a direct follow-up to Super Mario Sunshine, but that isn’t necessarily a bad thing. The game’s unique flair and ability to piss off purists give it a lot of credibility to stand on its own among the Mario games, which in recent years, have become sort of same-y from time to time. And for those reasons alone, this “black sheep” of the herd is an unforgettable adventure that far too many sand-intolerant gamers have written off.

So, do your civic duty today, and play Super Mario Sunshine. If, of course, you were lucky enough to participate in the ridiculous “timed release” that was Super Mario 3D All-Stars on the Nintendo Switch. You never know what you’ve got til it’s gone!