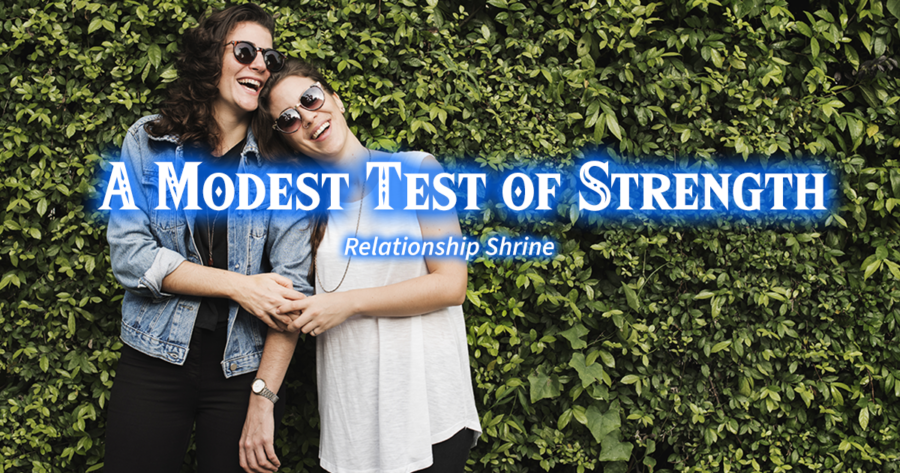 I have a confession to make — I am a fake gamer girl.

I love video games and for most of my life, I hated playing them. My experience, prior to about 2017, was limited to Chex Quest, being the player two in Mario Kart: Double Dash who didn’t do any driving, and reluctantly joining Halo 3 matches so my friends could get a guaranteed easy kill.

My wife, however, is like a fucking video game savant. Granted, she grew up with multiple consoles in her house, while I wasn’t allowed to have any. She also had the advantage of having an older brother, while I was an only child. But she’s preternaturally good at games, dude. Particularly FPSs and anything else that requires quick reflexes and accuracy — neither of which I have in the slightest. So for the first 4-ish years of our relationship (going on a decade now), I mostly just watched her play stuff, which I was more than happy to do, and occasionally joined for drunk rounds of Duck Game when everyone was blitzed enough that my total ineptitude didn’t matter.

Then Breath of the Wild came out.

I love the Legend of Zelda. I love the story, I love the characters, I especially love the music*.  But I had never played one. I have very vivid memories of watching my older cousins play Majora’s Mask as a child (which I’m sure did not contribute to my adult anxiety disorder). I dead-ass binged MatthewMatosis’s entire Zelda analysis playlist without having touched a single one of the games in question. Skyward Sword came out when I was in college, but none of my friends had a Wii. So I was very intrigued by BotW, both visually (I’m an artist), and because for the first time, I had a console in my house to play it on.

My wife played while I watched, totally enraptured, for a solid 60 hour playthrough right when the game dropped in spring of 2017. It was so awesome that I decided to give it a go moments after she beat Ganon, even though I had no experience with 3D action games to speak of.

As you can imagine, it was rockier than a Stone Talus.

I’m a jumpy person and prone to button mashing. I had no idea how to do anything remotely complex, and was reluctant to enter combat to the point of missing really good, and often necessary, items. So my first few hours of play were the tutorial, avoiding enemy encounters, and generally letting the open nature of the game enable me to do some first-rate cheesing.

My wife was very careful to not give unsolicited advice…at first. I really had a hard time getting used to the dual analog sticks and she realized that a lot of my gaffs early on were going to be related to the control scheme. But as I got further and further in the game without really learning how to engage with it, she started noting that I should really go fight those Bokoblins if I want good weapons. I was insistent that turning this into a stealth game was fine. And the longer this went on, the frequency of her comments went up. As did my annoyance with them.

For those of you who have played the game, you’ll remember the combat oriented shrines, called Minor, Modest, and Major Tests of Strength. This is where shit hit the fan.

I hit a Modest Test maybe 15 hours in. At this point, I was super underprepared and had relied on getting a few overpowered swords here and there to crush anything in my path rather than learning the actual skill the game was desperately trying to get me to learn. The shrine in question, however, drove me to the brink of insanity. My wife started making what were initially helpful suggestions. As she should have — I was failing miserably and getting fucking tilted about it.

But I didn’t ask her to help, either. And in retaliation, I wound up not only NOT implementing her well-meaning but increasingly irritated advice, but just trying the same bullshit over and over again to no avail. So my frustration with the game only led her to get more frustrated with me for not listening, which led to more advice, which led to me getting more annoyed with her—do you see where this is going? We accidentally started a Hyrule nuclear chain reaction.

Worst of all, there was no way out. I had hit a hard block both in-game and out; she wanted me to learn the “right” way to play, and I wanted her to shut up for a minute and let me figure this out.

I have another confession — I am a recovering people-pleaser and used to avoid confrontation at all costs. A younger me would have preferred to lie through my teeth, do shit I had no interest in, and get taken advantage of emotionally, rather than just simply say “no” or “I disagree.” I didn’t like the idea that people could be mad at me. So I spent most of my teens and early 20s resenting people I should have liked, all so I could pretend I was being an easygoing person.

Breath of the Wild fucking obliterated all that in the best way possible. We both realized that we had to work together in order for me to have this experience of playing a game by myself that both of us really wanted me to have. We actually learned to argue — productively — and solve a problem together as a result.

I recall telling her “I want to do this, but I’m going to quit right now if you keep backseating me.” That was huge for me. Saying that to anyone other than her would have made the “CONFLICT! CONFLICT! RUN AWAY!” sirens go off in my head. But somehow, pushing me to a reasonable limit, inside my house, with someone I trusted, over something as seemingly meaningless as a video game genuinely did the trick. It got me to engage in basic conflict resolution instead of wiggling away in misplaced fear.

It turns out she had real reasons to be upset, too, that I needed to recognize. I had been unwilling to hear her legitimate qualms because I was too sensitive about everything. I was sensitive about getting my ass kicked and I was sensitive about what started as little notes here and there that turned into what felt like my mom trying to get me to learn T-Ball. I have really bad hand-eye coordination, OKAY, MOM?

But she had let me fail long enough, and the result was that now we were both mad about it.

We took a step back. She apologized for getting frustrated with me. I apologized for refusing to try anything she said. She slowed down in teaching me in order to make sure I really got what she was saying instead of firing off advice I literally did not ask her for. I stopped trying to race through the game on easy mode because frankly, I had run out of areas that were easy.

And — believe it or not — I got better. Way better. Between two full playthroughs and the DLC, I put 130+ hours into that fucking game, over twice her initial run. Practice did not make perfect (I still avoid the silver Lynels. Fuck those guys) but it did prove that I could learn a whole new skillset as an adult. It proved that I could accept help, and that I could be clear and honest when the help was not, in fact, helpful.

We also both realized that over the course of our relationship up to that point, we did not have super healthy communication habits. The crack this game caused between us widened, and let us address the fact that we didn’t know how to argue. We were both under the impression that good couples don’t fight, ever. Obviously, this is deeply naive, and the space left by this very innocuous tiff was soon filled by an understanding that up-front, kind honesty, even if it hurts, is always going to be best. We have carried that behavior through to this day.

Nintendo, however, still owes us a new Zelda to test our growth out on. Chop chop, fuckers. I have healthy conflict resolution to do.

*My Spotify wrapped listen a top genre as “otacore,” which frankly fuck that because I’m not a weeb, okay, I just think the compositions of Zelda songs are really cool and—