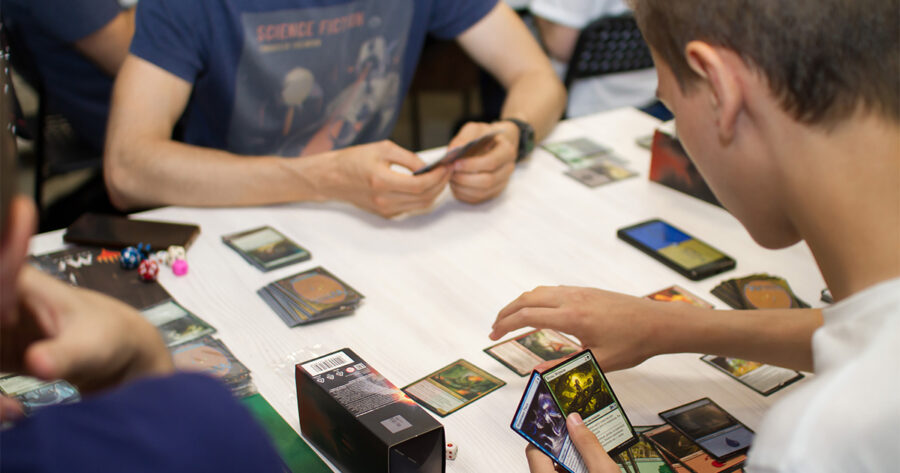 RENTON, Wash. — The latest expansion to Magic: The Gathering has come under fire for including a red card that allows players to just sock their opponents right in the kisser.

“We understand that our new card, Tyr’s Bracelet, has proven controversial,” said Wizards of the Coast representative Sarah Queen at a press conference yesterday. “Every improvement is. Since 1993, we have strived to constantly refine and better reflect MTG’s various play styles. Red mana has become synonymous with direct damage dealt quickly. What’s more direct than laying a perfect haymaker into someone’s temple?”

Tyr’s Bracelet is an Instant card with a 2 Mountain mana cost and an effect that simply reads, “Punch Opponent,” with no further detail provided. The only other text on the sparsely designed card is the flavor quote, “Bada bing bada boom / Hope you like eating with a spoon,” attributed to Chandra Nalaar.

“I have mixed feelings,” longtime player Gavin McKenzie said. “The cheap cost to damage dealt could ruin the meta, but on the other hand, it has been a great incentive against my housemate bringing out that Flying / Deathtouch vampire deck bullshit. Am I worried about the future stability of the game? Sure. Have I built an effective ramp deck, just by wearing signet rings to every friendly? Absolutely. Who’s got a fuckin’ Death Touch now, Daryl?”

Wizards of the Coast released the card along with three others: a Swamp land with a Google Maps screenshot of The Everglades for art, a green card titled “An Oxen Made Of Ferns Or Something,” and a white 0/9 Defender creature that lets you walk away from the table and “play something else for a bit.” Fans decried the new cards as the latest example of power creep and exhausted imagination in the card game.

“I don’t know how to police the new rules,” exasperated tournament organizer Geoff Bloodmahn revealed. “Wizards of the Coast have turned my monthly competitions into unregulated fight clubs. The strongest pick on everyone else. How can I protect those poor, defenseless Blue Mana players? It’s all well and good to muck around drawing cards or shuffling your opponent’s deck, but unless there’s a baseball bat in those ‘Arcane Libraries’ or whatever the fuck it is that they play, I’m advising they stay at home.”

In response to the criticism, Wizards of the Coast has reportedly canceled their planned follow-up to Tyr’s Bracelet, a four-paragraph Sorcery card named “Napalm Recipe.”