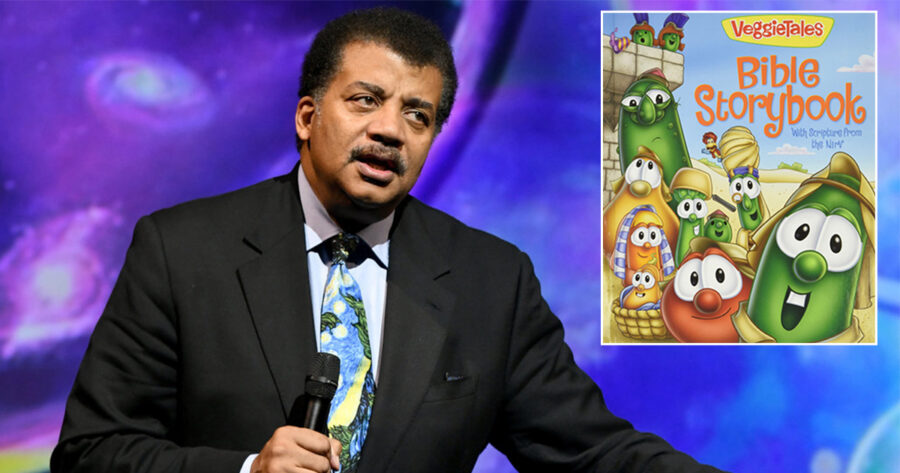 NEW YORK — Neil deGrasse Tyson addressed a gathering of students at Columbia University this week with a seminar in which he covered all things regarding the cosmos, existence, and even the animated religious program VeggieTales.

“I happened to watch a cartoon the other day called VeggieTales, and it made me angrier than anything I’ve watched since Gravity,” the astrophysicist said. “Vegetables that had somehow achieved sentience? Bouncing around and speaking? It’s preposterous. They were also spreading the word of the Christian God, who, by the way, isn’t real. Is everybody who watched this a baby? It’s just completely ridiculous the producers thought they could get away with something that is simply scientifically false.”

“I mean, Bob the Tomato? Larry the Cucumber? ‘’God is bigger than the boogie man?’ One should not heed the advice of such ridiculous abominations, especially when it comes to the existence of a higher power, which does not exist and cannot exist,” said Tyson, continuing through his slideshow while breaking down every scientific inconsistency about the show’s premise that garden-variety vegetables could learn to speak and spread the gospel of Christ.

Students appeared baffled and confused during Tyson’s presentation, as he grew more and more fixated on the subject.

“He just kept going on about how VeggieTales could never actually happen in real life,” one student said. “I grew up watching VeggieTales. It was enjoyable enough if you didn’t pay too close attention to it. I don’t even consider myself religious, per se, but I don’t see how it’s hurting anyone. I agree that vegetables can’t talk.”

“Neil is one of our favorite and most esteemed speakers to visit campus and come speak to our students,” said Dean of Columbia University James J. Valentini. “And even though he does tend to get a little stuck in the weeds occasionally, he’s one of the greatest scientific minds of our generation. Just never listen to him talk about something you enjoy because he’s a real buzzkill.”

At press time, the Q&A section of Tyson’s presentation had gone completely off the rails after a student asked a follow-up question about the scientific plausibility of Pokémon.