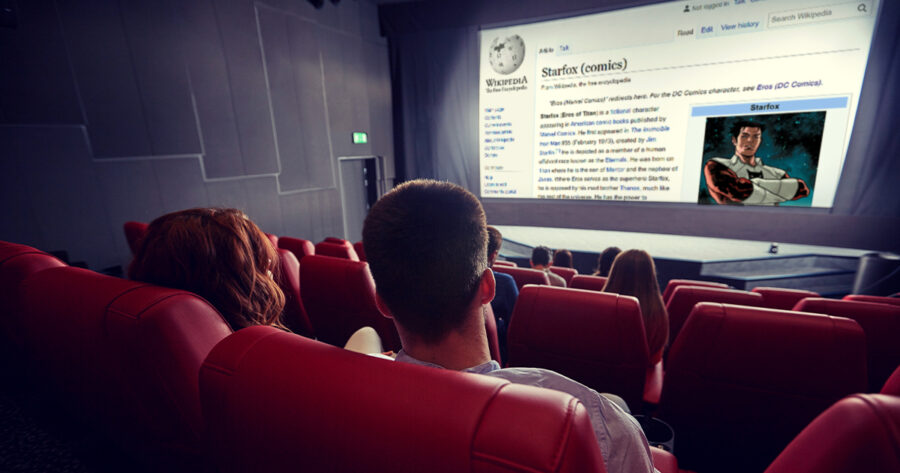 LOS ANGELES — Marvel Studios announced today that all post-credits scenes in its films and television shows will now contain a Wikipedia article explaining who that guy is.

“People often leave the movie tired and confused,” Marvel Studios President Kevin Feige said. “While we want people excited for Eros or Hercules, it’s not always clear who the hell we’re pretending everyone is familiar with. No longer will you have to begrudgingly go to YouTube for the ‘End Credits EXPLAINED’ video. Now after the post-credits scene, there will be a prompt onscreen to look under your seat, where I have diligently printed out a Wikipedia article about the character and gingerly placed them under every seat in the theater.”

Marvel viewers have already begun to appreciate the new context.

“I never knew the joy that comes from having any context at all for the last scene of a movie,” said moviegoer Ryan Hemworthy. “Now I can read the basic Cliff’s Notes on who a given character is, before also having to read what their origin is and who they are related to in the comics, which may end up mattering or may be thrown out entirely. I also have always been saying that the Marvel movies need more homework before going to the theater. Just watching several movies and a few seven hour television shows is just way too easy. I like reading up on a character’s whole deal and becoming intimately familiar with their role in Marvel so I have proper context when the character’s movie throws out all the information from the comics and does it’s own plotline.”

Some viewers, however, have criticized the decision.

“Knowing who obscure characters are and scoffing at people in the movie theater while they look it up online is my entire personality,” said self-described incel Wil Hickman. “Now I’m going to have to read the Silmarillion or learn obscure Dungeons and Dragons rules in order to feel superior to other people. Every year, the world gets harder and harder for nerds like me.”

At press time, Marvel reported that their plan to distribute Wikipedia articles would also thankfully eliminate any reason to have to speak to your friend who has read the comics.