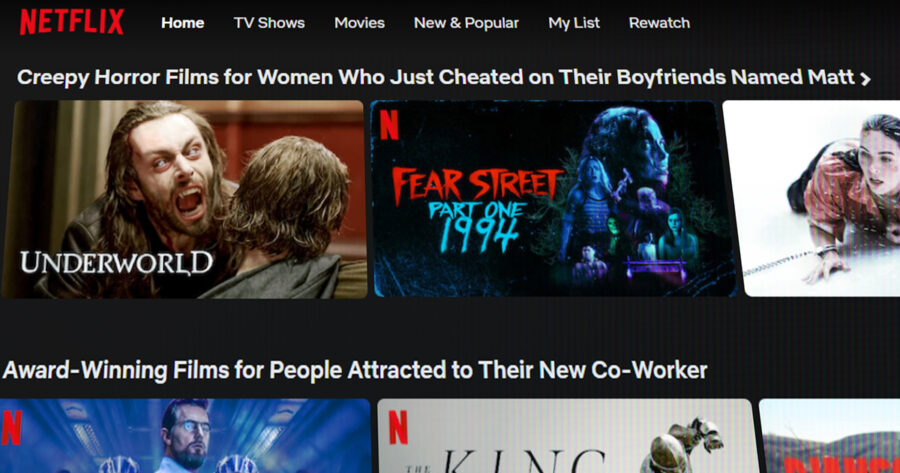 LINCOLN, Neb. — Local man Matt Brady has become suspicious of his girlfriend after discovering a category on her Netflix account suggesting movies that are Creepy Horror Films for Women Who Just Cheated on Their Boyfriends Named Matt, according to those close to the situation.

“He’s totally overreacting, it’s ridiculous,” said Brady’s girlfriend Katlyn Gallegos. “I’ve been watching a bunch of horror movies because it’s October and just the other day I watched The Descendants, which is about a guy named Matt who gets cheated on. It’s just a dumb algorithm thing; I have all sorts of weird Netflix categories. Just scrolling through it right now, I see Historical Dramas Featuring Ben Affleck, Bingeable Science Fiction TV Shows That Mention Jupiter, and Romantic Comedies Usually Enjoyed By Women Who Are 28 Years Old and Unhappy With Their Relationship WIth Someone Named Matt, Causing Them to Become Attracted to Their Sexy Co-Worker Stephan. See? It’s just random nonsense.”

According to close sources, many of Gallegos’ and Brady’s friends have taken Gallegos’ side in the argument.

“Matt really needs to grow up and stop being so distrustful of his girlfriend,” said Gallegos’ co-worker and recent close friend Stephan Henson. “I mean why is he even snooping around on her Netflix anyway? Shouldn’t he have his own account? It’s incredibly annoying too because she was at my house the other day and we were gonna watch a creepy horror movie together but it stopped working, I think, because he started trying to use the account. Dude, grow up. Katlyn isn’t cheating on you, but if you keep treating her like this, I wouldn’t be surprised if something does end up happening down the line. But it isn’t right now!”

In an attempt to resolve the issue and save his relationship, Brady has reportedly called Netflix customer support to see how the categories are created.

“Everybody was telling me that the Netflix categories are just random, so I called Netflix to see what the deal is. Unfortunately, they told me that the categories they create are a reflection of our very essence. Direct quote,” Brady said. “Apparently they take the algorithm very seriously over at Netflix. The representative I spoke to explained to me that the app can, like, see into your soul and extract the exact type of movie or TV show you would want to watch. They said there’s no truer version of yourself than the recommended shows you see on Netflix. They told me that some people don’t like the algorithm only because seeing themselves in such a raw honest way is frightening.”

“Personally I thought that was kind of weird,” he added. “Most of my recommended shows are just whatever Netflix Original came out that week.”

At press time, Gallegos discovered that Brady was so obsessed with the idea that she might be cheating on him because he was cheating on her.