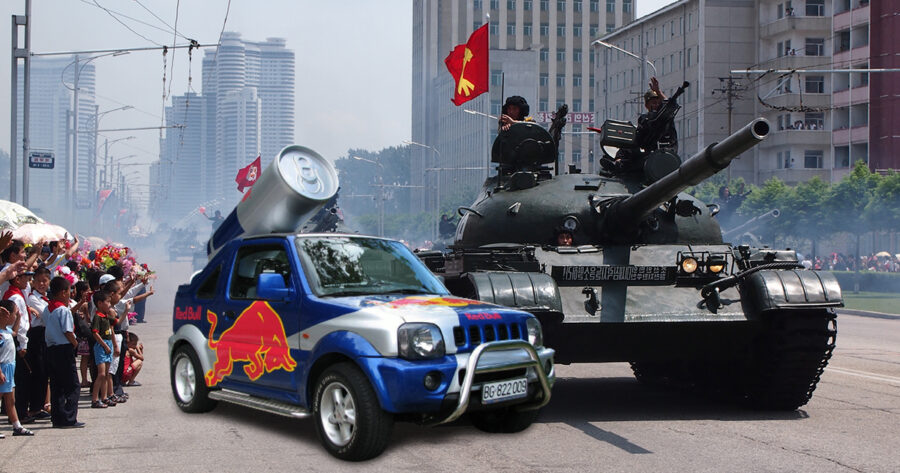 PYONGYANG — Confusing intelligence officials who initially mistook it as some unusual model of short-barrel tank, a Red Bull branded SUV reportedly found itself lost in the middle of a recent North Korean military parade celebrating the 75th anniversary of the Workers’ Party of Korea, sources say.

“The North Korean government loves to use their parades as an opportunity to show off their new military vehicles, so when we saw a small silver and blue vehicle with a large canister pointing at a 45-degree angle, we assumed it was just another new weapon they’d built,” said Philip Moore, member of a watchdog group working to monitor the proliferation of nuclear weapons. “Now that we’ve reviewed some higher-resolution satellite photos, it’s clear that it’s actually just one of those old Red Bull cars that you’d see at music festivals. It’s really hard to say how it ended up there, but I know one thing for sure: it’s definitely lost.”

U.S. intelligence officials were equally surprised by the news, but said that the car could be a powerful strategic asset on the ground in Pyongyang.

“We’re working hard to try and get in contact with the driver of the Red Bull car,” said an unnamed State Department official. “Since these are promotional vehicles, it’s very possible that there are still unopened cans of Red Bull in the car’s trunk. It might even have a built-in mini fridge to keep the drinks cold. If we could somehow get the driver of the car to convince Kim Jong Un to try a free Red Bull, it could exacerbate his recent heart condition, neutralizing him and preventing the threat of military strike against the U.S.”

The State Department official was enthusiastic that the presence of the Red Bull car could be an advantage for the U.S. amid cold relations with North Korea.

“It’s good to have plenty of strategic assets in a tense diplomatic standoff, and we’ve actually seen this approach work before. We snuck an Oscar-Meyer Weinermobile into the German–Soviet military parade in Brest-Litovsk in 1939 and that was a hugely important part of why we beat the Nazis.”