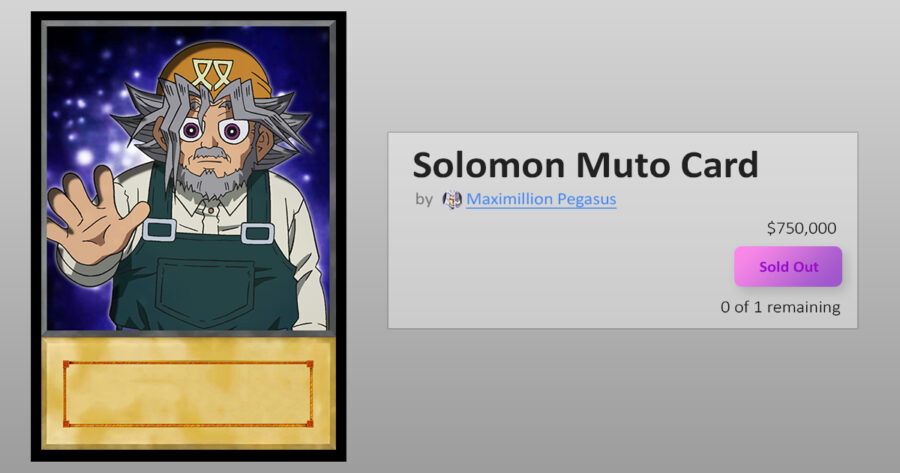 DOMINO CITY, Japan — Local grandfather and game shop owner Solomon Muto has reportedly been sold as an NFT after being sealed into a card by Duel Monsters creator Maximillion Pegasus, according to those familiar with the situation.

“Ooh, it feels good to watch a man’s soul be sent to the blockchain, doesn’t it, Yugi-boy?” Pegasus reportedly said to Muto’s grandson Yugi just moments after the transaction was completed. “Oh don’t tell me that capturing your grandfather in a card and selling him to the highest bidder, your rival Seto Kaiba, using a technology that’s destroying the planet has put a rift between us. It was nothing personal.”

Close sources have confirmed that the purchaser of the Solomon Muto NFT was none other than KaibaCorp CEO Seto Kaiba.

“I’m not quite sure what I’m going to do with this thing, but keeping any powerful cards out of the hands of Yami Yugi is top priority. Now I own the digital rights to Solomon Muto’s soul and no one else on the planet can obtain the card. Wait, what? People can still get the card even though I own the NFT? I just own the rights to a photo?! Shit, this is really confusing — even for me, the richest and smartest man alive,” Kaiba said. “Whatever, it was probably still worth it. I just wish I hadn’t converted Mokuba to KaibaCoin to pay for it. I miss you, Mokuba… Eh, oh well.”

At press time, Yugi Muto was reportedly working on a way to release his grandfather from the NFT by winning a series of card games or believing in himself really hard.