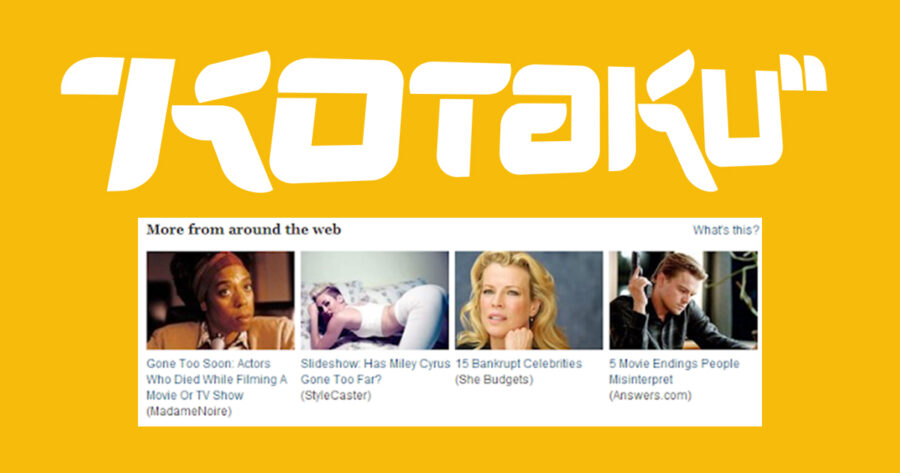 NEW YORK — Advertisers displaying banners on the video game website Kotaku were reportedly devastated to learn that all the people who viewed their ads recently were actually there because they were upset about an article.

“A lot of people think clicks are clicks. Not to us. We only want views from people who are happy to be looking at our ‘Around the Web’ ads featuring articles like HOTTEST CELEBS Who Accidentally Had WARDROBE ACCIDENTS On Set,” said advertiser Barney Byrne. “It just sucks. We were so overjoyed when we saw we made a bunch of money from some article about a Far Cry preview, but to find out it was people who were reading it to complain on social media? Well we might as well just throw all that money away. We won’t, but we might as well.”

According to those familiar with the situation, there was an air of depression around the advertising agency upon learning the unfortunate news.

“Everyone was kind of just despondent for the rest of the day,” said Google Adsense copywriter Nadir Becker. “Nobody gets into writing pop-up ads saying that you have a virus on your computer that you need to fix right now because they want to make people upset. We’re artists, ultimately, you know? We’re trying to bring people joy or make them think, we’re not trying to just capitalize on whatever we can say to get people to look at our spam. A lot of people think that we don’t care about this crap, that it’s totally beneath us, that all we care about is our bottom line, and that we advertise indiscriminately across thousands of websites, hoping they do literally anything they can to move the line upwards a little bit. Anyway, what was I saying?”

At press time, advertisers were overjoyed to discover that several angry readers of Kotaku had used a workaround to be able to link to the article that upset them without driving any traffic to the domain.