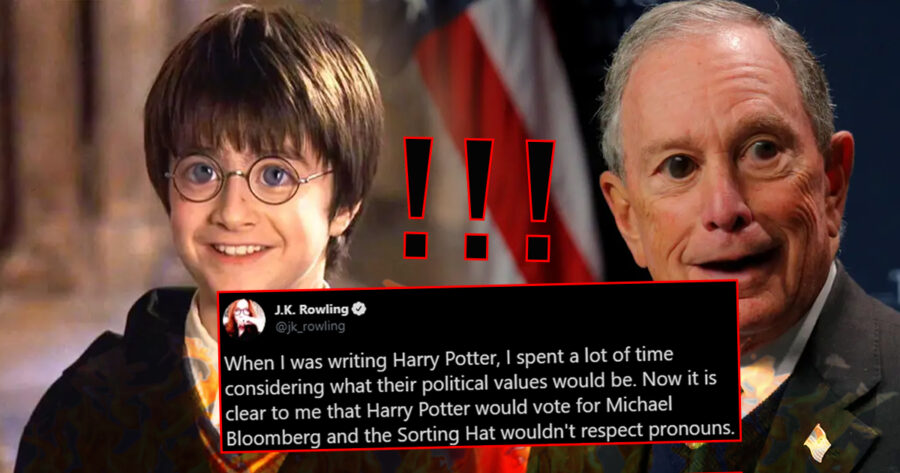 LONDON — In what fans are calling the most pathetic example of Michael Bloomberg’s viral campaign advertising, Harry Potter author J.K. Rowling has announced on Twitter that the titular character would vote for Bloomberg in the United States Democratic primary for president.

“I haven’t actually seen any money from the Bloomberg campaign,” Rowling lied through her teeth in a series of tweets. “I just think that Bloomberg exemplifies the morals of the character Harry as I wrote him in my series, and if I were to write a sequel in the modern day, he would absolutely vote for the former NYC mayor.”

“Bloomberg is obviously the strongest candidate because, while someone like Voldemort had seven horcruxes, Bloomberg has twelve,” Rowling continued. “The horcruxes are his NDAs. The ones that the women who used to work with him signed. You get it.”

When asked why Harry would vote in a U.S. election at all, Rowling replied “because he knows magic, you fucking moron.”

Despite some criticism, dozens of previously-inactive twitter accounts spoke out in strong support of both Rowling and Bloomberg.

“Thank you for this new information! I love learning about the expanded lore of the Harry Potter universe and supporting Michael Bloomberg for president!,” said user @StopAndCharm.

“I love this!” said user @BloomysHouseElf. “I only vote based on which characters are most likely to fit in the Harry Potter universe and I just burned all of my Elizabeth Warren #swag because of this tweet.”

“I think this is great! Neither J.K. or Michael are awful monster-people,” exclaimed user @terfisaslur83. “I’m a real human.”

Former presidential candidate Andrew Yang responded to the news on his new job as a commentator at CNN.

“As someone who also loves trading in political credibility for money, I think it’s incredibly savvy for Rowling to come out in support of Michael Bloomberg through her most popular character,” said Yang. “I do think, however, that comparing all Bernie supporters to Death Eaters was offensive, considering that Bernie’s family were killed by Nazis in Germany. It was smart of Rowling to quickly say that actually Death Eaters aren’t that bad anymore, but still it was a pretty intense comparison.”

When asked to comment, Michael Bloomberg accepted the endorsement.

“Harry Potter is a great person and I’m happy to hear that he would vote for me in the election,” said Bloomberg. “I think he understands the importance of having more aurors in high muggle population areas. I’ve paid several young staffers $100,000 to ensure that the previous sentence makes sense.”

As of press time, commentators on MSNBC had already called the election for “literally anyone but Bernie Sanders.”